Friday 14 September, Tarifa - Los Lances Beach, La Janda, Vejer de la Frontera - Barbate Marshes, mostly sunny, calm air-light E wind, 38C:  Today I joined Wingspanner on a day trip along with Marie, Penny and Jane; as we left Gaucin at 0800hrs it was a cool, misty morning as we drove on it got cloudier on the coast but cleared as soon as we dropped below the hills above Tarifa. On the way we saw 37 Griffon Vulture over Sierra Crestellina, Casares and here we also saw a group of 6 Red-billed Chough. We stopped at a migration watchpoint on the hills just outside Tarifa but it was early and there were no raptors, apart from a few Griffon Vulture, to be seen. Arriving at Los Lances beach, Tarifa we soon saw several Short-toed Eagle, Booted Eagle and Black Kite looking for thermals to help get them over the Straits of Gibraltar; in amongst them were an adult and a sub-adult Egyptian Vulture with an occasional Sparrowhawk joining them. Walking to the hide on the beach we logged Cattle Egret (see photo), Northern Wheatear (see female in photo), Stonechat, Crested Lark, Short-toed Lark, Spotless Starling, a couple of Common Starling and Bee-eater. On the beach were Little Egret, Audouin's, Yellow-legged, Black-headed and Lesser Black-backed Gull, Sandwich Tern, Sanderling, Turnstone, Dunlin, Ringed Plover and about 10 Yellow Wagtail. At La Janda we immediately started to pick up some great species with a distant female Marsh Harrier showing first. Along the main drain we saw a female Hen Harrier, another female Marsh Harrier, juvenile Montagu's Harrier, at the edge of the water a juvenile Black-crowned Night Heron and in the fields beyond lots of White Stork, Little Egret and half-a-dozen Glossy Ibis. Driving along the raised track above the drain we saw Grey Heron, Woodchat Shrike, several Zitting Cisticola, Corn Bunting and a couple of Spanish Sparrow. Perched on the top of a pylon was a young Black-winged Kite, one of three seen in the area. A little further on we spotted 50+ Yellow Wagtail together at the side of a field, at least 8 Lesser Kestrel feeding over a stubbly field plus another 2 female Marsh Harrier, a second Hen Harrier and a female Montagu's Harrier. After a brief stop for lunch, it was now very hot, we visited a pond alongside the track to Benalup where we saw a Hoopoe, 3 Black-winged Stilt, one, possibly two, Lapwing, a couple of Dunlin, several Green Sandpiper, a Common Sandpiper and two Common Snipe. On the drive out of La Janda Bob spotted a Common Redstart - one of few migrant passerines seen all day.
Next we drove to Barbate Marshes at Barca de Vejer where we had great views of 150+ Glossy Ibis (see photos) and also picked up Spotted Flycatcher, at least 4 Wood Sandpiper, Common Snipe (see photo with Wood Sandpiper), 10+ Ringed Plover, one Curlew, a Common Redshank and best of all a Spotted Redshank. A really good day with some great sightings. 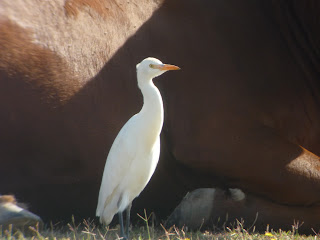 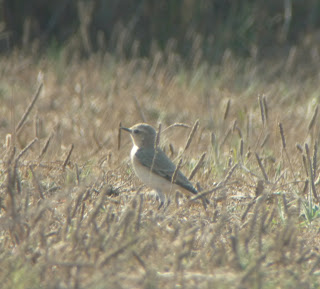 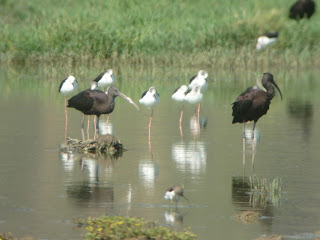 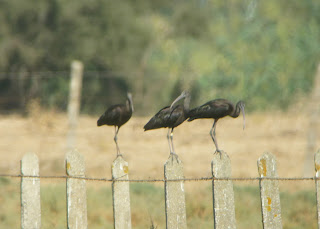 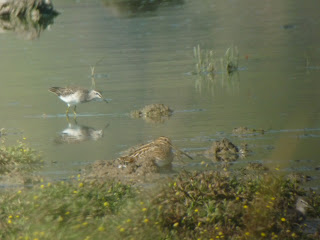