A cloudy, dull and damp day during which 19mm of rain fell. I was told last week that there was a Harrier sp. around the quarry near Manilva; on Monday I had a brief view as I drove along the toll road but couldn't get an I.D. Today I had reason to head to the coast again and, lo and behold, a male Hen Harrier flew across the road just 50m in front of me as I passed the quarry on the Gaucin-Manilva road. What a great sight!
On Estepona beach there were a good number of gulls, 300+ Yellow-legged, 50+ Lesser Black-backed and 50+ Black-headed, but nothing out of the ordinary; also there, 15 Sanderling. In Calle Real, parallel to the beach, there was a Common Chiffchaff in one of the hanging baskets attached to a lamp post.
Posted by Paul at 19:01 No comments:

An hour spent in perfect conditions at the Puerto del Espino from 0930hrs looking for Tuesday's Golden Eagle didn't produce a single raptor in flight! A lone Griffon Vulture perched atop a pylon was the only raptor around. There was, however, the first House Martin of the year, flying with a small group of Crag Martin above the Genal valley; also Common Chiffchaff and both Song Thrush and Sardinian Warbler in song.

Today's Spring-like feel was enhanced by the appearance of the first Barn Swallow of the year with one above the Rio Genal below Gaucin at 1100hrs; also there Griffon Vulture, Grey Heron, Green Woodpecker, 5+ White Wagtail, Grey Wagtail, Black Redstart, at least 6 Chiffchaff sp., several Blackcap, small groups of Chaffinch and Greenfinch; Cetti's Warbler was heard.

Back in the village there was a Common Crossbill at cafe/bar El Hacho and, early afternoon, another below the old convent.
Posted by Paul at 20:12 No comments:

Despite having to scrape ice from the car windscreen this morning, at 1000hrs, today was a little warmer than the last few days. An hour's visit to the SW slope of El Hacho produced 25+ Griffon Vulture, 2 Peregrine, Southern Grey Shrike, 5 Song Thrush, Blue Rock Thrush, 1 male Ring Ouzel (a good view of this one - alpestris - so maybe the two last week were alpestris, too), 10+ Black Redstart, Stonechat, Sardinian Warbler; Dartford Warbler was heard.

A short drive to the turning to Cortes de la Frontera to get a better look at the snow on Sierra de las Nieves produced a superb sighting in the form of a juvenile Golden Eagle being mobbed by two Common Buzzard. I lost the eagle as it lost height to shake off the buzzards so went back a few hundred metres towards Algatocin to try and relaocate it - no luck with the Golden Eagle but there were 2 adult Bonelli's Eagle over the penon de Algatocin! What a great 10 minutes!

Back in Gaucin there was a Common Crossbill in the cypress tree alongside cafe/bar El Hacho and in the afternoon the first returning Black Kite drifted gracefully along the Genal valley and, incredibly, another Bonelli's Eagle was seen between El Hacho and La Umbria as I waited for the shops to open at 1700hrs!

A visit to the Rio Genal from 0930-1030 this morning was pretty quiet with the following noted:
Griffon Vulture, Grey Heron, 2 Great Cormorant (flying over), 10 Mallard (also flying over), Song Thrush, White Wagtail, Grey Wagtail, 3 Chiffchaff, Blackcap, 6 Greenfinch and, best of all, 13 Hawfinch. Later in the morning there was a Common Crossbill singing from a cypress tree opposite the Tienda Verde in Calle Convento.

In lieu of anything more exciting, here's a photo of a White Wagtail: 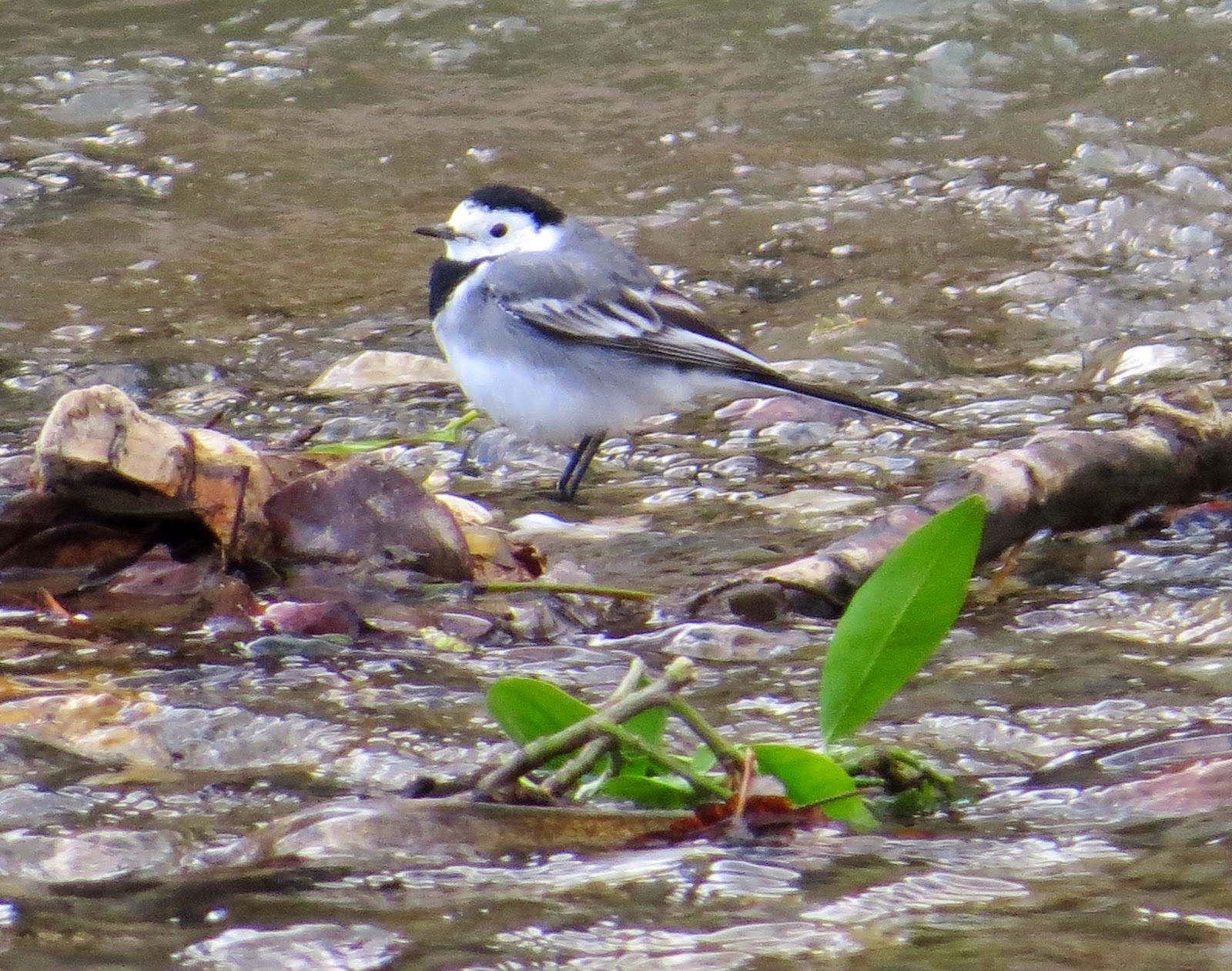 There was a snowfall on Tuesday evening with a light covering as far south as the western peaks of the Sierra de Libar.  The Gaucin-Ronda road was closed at Encinas Borrachas leaving several people stranded for a couple of hours! The Sierrra de las Nieves was still looking good behind Gaucin on Friday, see photo: 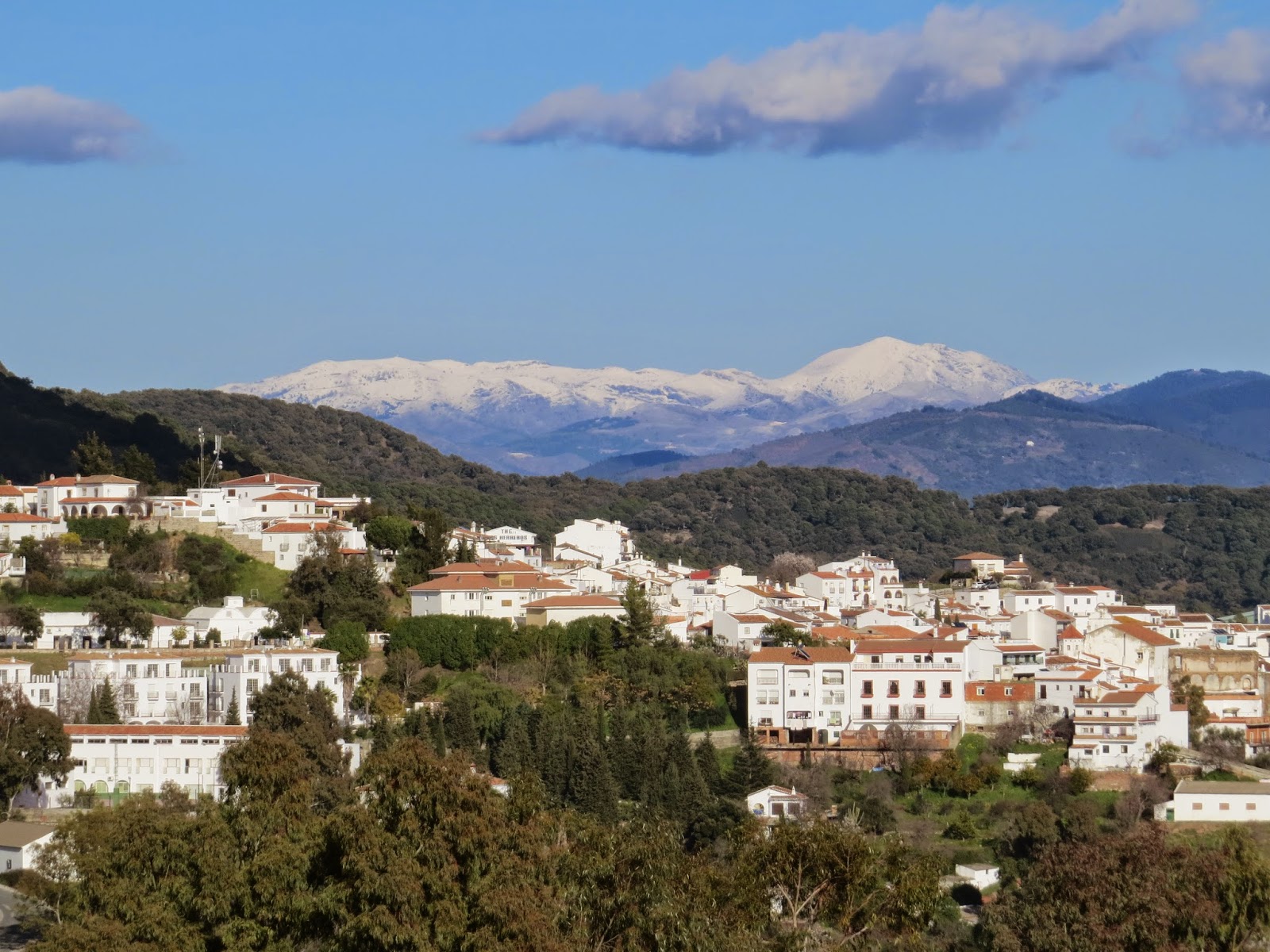 After quite a wet weekend, with 34mm of rain falling on Sunday, today was about as cold as it gets here in Gaucin; during a brief sunny spell mid-afternoon the temperature managed to struggle up to 6C otherwise it was around 4C with a cutting northerly wind. Whilst walking this morning there was a Hawfinch at El Peso and a Southern Grey Shrike calling below the SW slope of El Hacho.
Posted by Paul at 14:55 No comments:

Back in Spain after a few days in the UK.....no birding there but I was treated to the wonderful sight of a group of 15+ Red Kite just above my parents' home on the outskirts of Reading - an unthinkable occurrance only 10 years ago, such has been the successs of this species following the Chiltern reintroduction scheme of the early 1990s.

Today saw the first rain of 2015 in Gaucin as 11mm fell overnight; as the rain cleared the day felt a good deal cooler, in the northerly wind, than the high of 11C. Just 4 Common Crossbill, flying over the old convent at 1730hrs, to report.

On the way to Malaga airport last Saturday we had great views of a male Merlin that flew along just in front of the car as we drove below Sierra Crestellina.

There are signs of early Spring with some of the small white-flowered cistus already in bloom and there are almond trees covered in blossom, too.

Back in the village there were several Griffon Vulture cruising around, also a Common Kestrel and, in the pines beside cafe/bar El Hacho, the 'resident' Common Crossbill.

Yesterday below the Cerro de Las Maravillas above Estacion de Gaucin, there was a Common Chiffchaff in full, but brief, song. Several sightings of Eurasian Sparrowhawk over the village earlier in the week.

Back in the village in the afternoon there were 50+ Griffon Vulture over the southern end of Sierra Crestellina and a Common Kestrel below Calle del Pino.

Driving back Ronda yesterday afternoon there was a Rock Bunting on a roadside wall and seen from the layby at Encinas Borrachas a Black Wheatear and 8 Griffon Vulture but very little else.

A stroll along the Camino de Gibraltar down to El Nobo at 0830hrs produced the following:
Griffon Vulture, Eurasian Sparrowhawk, Great-spotted Woodpecker, Eurasian Jay, 30+ Spotless Starling, 3 Song Thrush (one in full song, one in subsong), Meadow Pipit, 5+ Black Redstart, Stonechat, European Robin, 10+ Blackcap, Common Chiffchaff, 1 Hawfinch (in the poplars below the convent ruins), Serin and Cirl Bunting; Cetti's Warbler was heard. A Common Kestrel was seen over the centre of the village at mid-day.
Posted by Paul at 19:34 No comments:

A cold start to the year, just 4C at 0900hrs, but warming up to a pleasant 16C. At least two Common Crossbill on the pines opposite the petrol station mid-morning. An indication of our mild winter to date is that there have only been up to 3 Blackcap in the Calle Convento/Calle del Pino gardens and no Siskin, Hawfinch or other rarer winter visitors seen.
Posted by Paul at 19:02 No comments: