A mid-morning visit to the west slope of El Hacho produced the following:
10x Griffon Vulture, Southern Grey Shrike, 2x male Blue Rock Thrush, a minimum of 20 Black Redstart (there were 5 in one small dead tree and at least another 10 in a rocky area of no more than 5m2; they were everywhere), 10+ Meadow Pipit, Northern Wheatear, European Robin, Sardinian Warbler, a flock of 10 Greenfinch, Chaffinch, Goldfinch and Rock Bunting. Red-legged Partridge was heard.
Posted by Paul at 20:22 No comments:

After the warm 24C of yesterday, today's 22C felt appreciably cooler in the northerly wind. I've been out two or three times in the past few days looking for, or rather, listening for, possible Yellow-browed Warbler; as in the UK, there has been an, albeit smaller, influx of this Asiatic visitor in Spain, too, including at least 3 in the Montes de Malaga. Needless to say, all I've managed to find so far is a whole load of Chiffchaff sp! I'll keep looking for a bit but their time here is likely to be short-lived.....
Posted by Paul at 17:55 No comments:

A wonderful, warm autumn day. Early afternoon there were 35 House Martin just to the SE of the village and a group of 35 Griffon Vulture over the northern peak of Sierra Crestellina. At least two Chiffchaff sp., in the Walnut tree in the garden.
Posted by Paul at 20:46 No comments:

Whilst checking out new walking routes near Castellar I passed through a cattle farm where there were 150+ Griffon Vulture feasting on a couple of dead cows; an amazing spectacle. As the corpses were some distance from the live cattle they may have been left out deliberately as carrion for the vultures.

Other than the vultures, there were 3 Common Buzzard, small flocks of Meadow Pipit, large flocks of mixed finches, several Crested Lark, Woodlark, Stonechat and Sardinian Warbler. There were a lot of Chiffchaff sp. around including one singing Common Chiffchaff.

In nearby Jimena de la Frontera at the same time last year there were still Booted Eagle and Barn Swallow around, but none seen today.

After a couple of mostly cloudy days with frequent, occasionally heavy, rain showers, today was an improvement. 18L/m2 of rain fell between 1000hrs Tuesday and 1000hrs Wednesday.
At 1000hrs this morning I took a short walk along the Sierra Espartina during which the sun came out and it felt quite warm again. There were few birds to be seen but I did log Griffon Vulture, Great-spotted Woodpecker, Woodlark, Crested Tit, Robin, Sardinian Warbler and Common Crossbill.

Yesterday morning there was a Green Woodpecker along the Camino Gaucin-Cortes just past Muebles Las Palas and there were a fair few Chiffchaff sp. calling from the cork oaks.
Posted by Paul at 17:10 No comments:

Heard several Chiffchaff sp. whilst walking around La Umbria this morning, including one Common Chiffchaff singing. Blackcap and Robin numbers are building up and the Calle Convento House Sparrow flock is up to an impressive 45+ which is probably why there was a Eurasian Sparrowhawk right up amongst the houses yesterday evening!
Posted by Paul at 12:10 No comments:

Back home after a week in the UK where I did very little birding but it was good to catch up with the numerous Red Kite that frequent the Thames Valley. On Tuesday 15 October I spent an hour at Port Meadow, Oxford; a great circular walk from the town centre, along the River Thames towpath and back via the Oxford Canal towpath. The meadow wasn't flooded but there was still a motley selection of geese including 2 White-fronted Goose and 4 Bar-headed Goose as well as a flock of 250+ Golden Plover and a handful of Northern Lapwing. Along the canal there were a couple of Common Chiffchaff, one still singing a few notes.

A walk around the Southern edge of Gaucin this morning produced little of note other than a Peregrine, Blue Rock Thrush and Crested Tit but it definitely feels more autumnal with the likes of Common Redstart and Pied Flycatcher giving way to Black Redstart and wintering Robin; there was, however, a reminder of summer with a flock of 100+ House Martin above the castle. Several butterflies on the wing including Tree Grayling.
Posted by Paul at 16:09 No comments:

At 0815hrs there were 45 Griffon Vulture and a Peregrine above Sierra Crestellina and at 1000hrs a Short-toed Eagle and a Peregrine over the Rio Manilva at the Utrera Gorge. Walking down to the gorge there were several Stonechat, Sardinian Warbler and a couple of Crested Lark.

There was a Short-toed Eagle just to the South of Gaucin village at 1845hrs.
Posted by Paul at 18:13 No comments:

Whilst walking near San Martin de Tesorillo this morning there was a Booted Eagle around. In Gaucin early evening there were 2 Swift sp. and 20+ House Martin high over Calle Convento.
Posted by Paul at 12:58 No comments:

Not much to report today, just an interesting sighting of 10 Raven circling above the village at 1415hrs and a handful of House Martin hanging on. I went to the West side of El Hacho at 1900hrs but forgot about the first rule of Sunday birding; don't go anywhere where there might be hunters! Other than the usual Stonechats and Sardinian Warblers, a pair of Thekla Lark, a pair of Peregrine and an heroic Red-legged Partridge atop the summit, there was very little braving the gunshots.
Posted by Paul at 16:52 No comments:

A visit to the coast gave me a chance to check out the heathland at Mesas de Chullera, just inland West of Duquesa. It's a great spot, totally quiet with lovely views, but there were very few birds around, unless you were looking for Sardinian Warbler or Stonechat! I did see Booted Eagle, Common Kestrel, Eurasian Jay, 6 Barn Swallow, House Martin, Spotted Flycatcher, Willow Warbler, Linnet, Goldfinch and Serin. The highlight was in a small recently-ploughed field just alongside the heath where there were no fewer than 9 Northern Wheatear.

This morning Janys and I checked out the superb drive along the recently resurfaced Jimena de la Frontera-Alcala de los Gazules road through the stunning Alcornocales National Park. We drove the 10km to the peak at Garganta Honda which, despite being lower than Gaucin at approximately 620m, has superb 360 degree views. It wasn't a birding trip but I did manage to see many Griffon Vulture, dark morph Booted Eagle, Common Buzzard, great views of a female Hen Harrier, Kestrel sp., Raven, Blue Rock Thrush, a lovely autumn plumaged Northern Wheatear and Dartford Warbler. It's definitely a location that needs to be afforded some dedicated birding time! 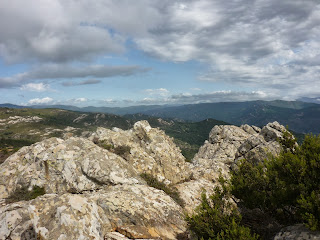 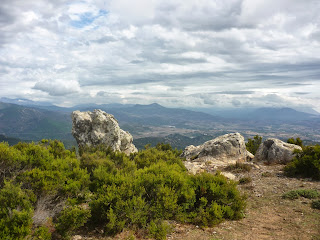 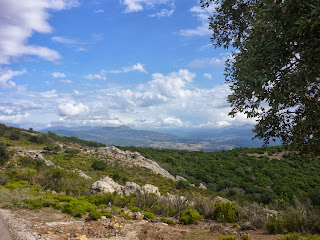 
After 2.5Lm2 of rain overnight, accompanied by a bit of thunder and lightning, today was mostly clear and bright. On the way to the coast at 1000hrs there were 3 Black Kite heading West over the A-7P toll road between Manilva and Estepona. Back in the village at 1700hrs there was a Common Crossbill singing at the top of a Cypress tree in Calle Convento and at 1800hrs there were 250+ House Martin, the majority being juveniles, in 2-3 groups between Calle Convento and Calle del Pino with many landing in turn on both a Palm tree and the ledge of an unoccupied building, see photo and video.

The following sightings were made by Tim Birkhead whilst staying in Gaucin during September - thanks Tim:

23 Sep: we had a juv Black Stork in the valley below Gaucin (Casares-Secadero track).

24 Sep: we had a stunning visit to Tarifa with hundreds of raptors (mainly Booted Eagle, Short-toed Eagle, but also Black Kite, Sparrowhawks) and Black and White storks seen from the mountain viewing place including flocks of storks over the town.

27 Sep: Peregrine over the village as it was getting dark.

29 Sep: we went back to Tarifa. It was still raining when we arrived at the migration watching place, but within 10 minutes the rain stopped, the sun came out and so did the migrants. Nothing we hadn't seen before and small numbers: raptors and Black Storks. We went off to La Janda, and saw Montagu's and Hen Harriers, lots of White Storks, Common Snipe, Greenshank, Lapwings (20) and a pair of Jackdaws.

30 Sep: we ducked under the cloud this afternoon into intermittent sunshine along the Barca Moreno-Marchenilla track and had great views of a mongoose along the road plus about 100 Corn Buntings with a similar number of Linnets. We then walked along the track from the Jimena metal bridge towards Los Lobos, and saw a Wryneck - fabulous views, we watched it for about ten minutes on the ground and on fence posts. On our way back we had 200-300 Alpine Swifts very high overhead - spectacular.

Back to warmer temperatures after several cooler days. At 1500hrs there were 3 Booted Eagle high up over the South of the village and at 1845hrs a pair of 'local' Pallid Swift over Calle Convento.

A brief visit to the West slope of El Hacho from 1915-1945hrs produced a good sighting in the form of a 1cy Egyptian Vulture which was circling the summit for 30min with one short rest, see photos. Also seen from the roadside were Peregrine, Southern Grey Shrike, Blue Rock Thrush, Stonechat, Thekla Lark and Sardinian Warbler.

150+ House Martin around Calle del Pino/Calle Convento during the morning and at 1800hrs 20+ Barn Swallow were seen moving through.
Posted by Paul at 09:05 No comments: