Monday 28 June, 2130hrs, Calle Convento. Whilst watching the sunset a male Sparrowhawk cut through the middle of an impressive Swift flock and landed on the railing of the terrace just 2metres away.
Posted by Paul at 14:20 No comments:

Working on my top terrace I took a coffee break and watched the hordes of swifts flying above the village, there were two Alpine Swifts in with the usual Common and Pallid Swifts. I am convinced that a prolonged 'swift watch' will produce a White-rumped Swift over the village - watch this space!
Posted by WINGSPANNER at 12:00 No comments:

A lovely warm afternoon walk along this pretty stretch of the river. We drove into Colmenar and turned left just before the railway track. After about 100m we turned right and followed a dirt track to the river-side and then after about another 500m we stopped at a weir. The birds on and around the river included Grey Wagtail, White Wagtail, Cetti's Warbler, Spotted Flycatcher, Grey Heron and lots of Green, Gold and Chaffinches coming to drink with Serins.

We walked back towards the village passing a row of tall eucalyptus on the river bank and mature cork oaks in the scrub on our left. We found many species there but had great views of a Wryneck which we found in a cork oak which then moved down into the scrub and showed well. We also saw a Hawfinch in the same cork oak as well as a Great Spotted Woodpecker (4), Eurasian Nuthatch, Iberian Chiffchaff, Blackcap, Sardinian Warbler and plenty of Blue Tits. At the river near the tall eucalyptus we watched several Golden Orioles flying to and fro across the river, a couple of Ravens flew by and a Cetti's Warbler showed extremely well in a dead bush in the middle of the river!

During the drive to and from Colmenar from Gaucin we noted Short-toed and Booted Eagles, not a bad afternoon's excursion, we made a promise to return during an early morning.
Posted by WINGSPANNER at 21:20 No comments:

A great morning's birding in this beautiful valley. First stop was Estacion de Cortes where we walked to the weir along the west side of the river. Lots of Blackcaps singing plus the odd Nightingale and Cetti's Warbler. Birds encountered along the walk included: Cirl Bunting, Woodchat Shrike, Hoopoe, Turtle Dove, Stonechats, lots of Goldfinches and Linnets. On the river we saw Grey and White Wagtails, Little Ringed Plover and to our delight we saw a White-rumped Swift coming down to the water to drink with Common and Pallid Swifts.

Above Montejaque we spent some time at the 'dam' watching Alpine Swifts, Black Wheatear, Blue Rock Thrush, Griffon Vultures, Short-toed Eagles, Common Raven, Red-rumped Swallow, Red-billed Chough and several Spanish Ibex. But special for us all was a pair of showy Bonelli's Eagles.

In a cork oak forest we added Short-toed Treecreeper, Bee-eater, Bonelli's Warbler, Serin, Gt Spotted Woodpecker, Nuthatch, Green Sandpiper (at a small resevoir). In all we logged 50 species in 5 hours which demonstrates what a great area this is.
Posted by WINGSPANNER at 18:20 No comments:

Saturday 12 June, 1900hrs, cloudy: A quick bit of birding before the England v. USA World Cup match....up on the ridge below Gaucin castle looking out towards the Sierra de Libar to the West and the Sierra de las Nieves to the North-East....Common buzzard, Black kite, Booted eagle and Griffon vulture.
Posted by Paul at 17:43 No comments:

Tuesday 08 June: 3 Common buzzards over the village at 1030 including a very pale juvenile that was virtually white from below except for dark carpal patches and some darkening to the primaries, lesser coverts and neck/head.
Posted by Paul at 11:51 No comments: 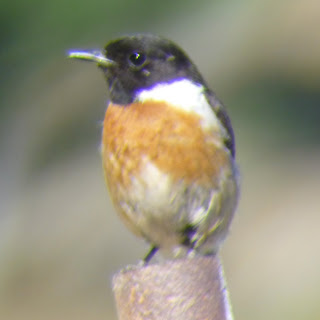 Sunday 06 June, Camino de Gibraltar, 1900hrs, clear but hazy skies: At one point I saw Honey buzzard, Red-billed chough and Booted eagle in the same binocular view! Excellent close-up views of pale phase Booted eagle and Short-toed eagle. The choughs passed in front of the village only about 25m from the houses. Oh, there was a pair of Stonechats, too!
Posted by Paul at 11:44 No comments:

Friday 04 June, 1130hrs, clear skies, little or no wind: 3 Honey buzzards circling around the back of Gaucin castle then heading off up the Genal valley.
Posted by Paul at 15:41 No comments:

Thursday 03 June, 1200hrs: with the unseasonably warm temperatures, 35C+ for the last few days, birding has been tough! but.....2 short-toed eagles over the village.
Posted by Paul at 22:28 No comments:

Sunday 30 May, 2215hrs: Red-necked nightjar right over the houses and gardens between Calle Convento and Calle Pino. Initially heard the distinctive 'cu-tok' call from down in the valley. Red-billed chough and Blue rock thrush behind Gaucin castle.
Posted by Paul at 22:12 No comments: