Some significant Swift sp. movement over Gaucin today with some observations as follows:

At 1845hrs a kettle of 80 White Stork drifted from above San Martin de Tesorillo towards Castellar/Jimena and an adult Bonelli's Eagle was patrolling the northern end of Sierra Crestellina.

The post-breeding House Sparrow flock in the Calle Convento/Calle del Pino gardens is now up to 30+ individuals and the past couple of days there have been two dark morph Booted Eagle around.

We are properly into summer, now; yesterday in Estepona the temperature was still 35C at 2030hrs, though thankfully the mornings remain cool, at around 18C. This morning I left at 0730hrs to bird a circular route through the Genal/Guadiaro valleys with some visitors to Gaucin. Our first stop, opposite Sierra Crestellina, produced little other than a couple of loafing Griffon Vulture as it was too early for the raptors to be up on thermals!

After a coffee and cake stop in San Martin de Tesorillo we drove on to the farmland area between San Pablo de Buceite and Marchenilla, stopping on the way to check out more Booted Eagle, Short-toed Eagle and a few high-drifting Griffon Vulture. It was now quite hot and generally fairly quiet but along the track we were rewarded with superb views of three Rufous Bush Robin; two juveniles and one adult, displaying and delivering short bursts of song, just 5m away (guess who left their camera in the car?!). Also seen were between 50-60 European Bee-eater, 3 Common Buzzard, one of which was giving a Short-toed Eagle a very hard time, more Booted Eagle, Peregrine, Lesser Kestrel, Woodchat Shrike and 5x Golden Oriole, including two colourful males. On the way back to San Pablo de Buceite we were treated to the lovely sight of a couple of White Stork that flew directly over the car at a height of just three or four metres.
Posted by Paul at 15:33 No comments:

Of note today, an Eagle Owl calling at 0430hrs this morning from below Calle del Pino; also a report of many Alpine Swift moving through, presumably heading south.
Posted by Paul at 12:55 No comments:

After a couple of days of mainly westerly winds, the more usual summery easterly levante is back. This morning at 0845hrs there were 3 Hawfinch in the gardens between Calle Convento and Calle del Pino. Swift numbers are reducing and a large proportion of the local House Martin population has already left for the wintering areas; groups of European Bee-eater, including one of 35 individuals, to-ing and fro-ing throughout the day.
Posted by Paul at 09:11 No comments:

An Iberian Chiffchaff, calling and singing in short bursts, visited the garden this afternoon, presumably already on its way southwards from its breeding grounds. Ann, who is on holiday in Gaucin, reported 100+ Griffon Vulture over the village mid-afternoon. Walking thorugh the mixed woodland just to the north of Gaucin at 1900hrs I noted Griffon Vulture, Booted Eagle, Great-spotted Woodpecker, a flock of 120+ Common Swift which included 2 Alpine Swift, Eurasian Nuthatch, Short-toed Treecreeper and Firecrest.

The past few days have seen mostly light SE winds with clear skies/hazy sunshine and temperatures in the high 20s and today was no exception as Bob and I, plus Peter, staying in Gaucin on holiday, set off at 0700hrs towards San Pablo de Buciete in search of Rufous Bush Robin. Parking alongside an unmade track that runs towards Marchenilla we checked the surrounding fields and bushes logging many species before we finally spotted our target bird, Rufous Bush Robin; there were at least three, including a male still delivering short bursts of song. Other sightings of note were: Short-toed Eagle (including one with a completely white head), Common Buzzard, Lesser Kestrel, European Bee-eater, 3x Little Owl, Red-legged Partridge, Red-rumped Swallow, Woodchat Shrike (including many juveniles), Wryneck, Tawny Pipit, Common Nightingale (one still singing), Common Whitethroat, Melodious Warbler and Crested Lark; nearby, at the Rio Guadiaro, there was an adult Olivaceous Warbler feeding a youngster and a couple of others including one in song.


Next we moved on to the Rio Guadiaro near Secadero, checking in on a Lesser Kestrel colony on the way - there were still 5 or 6 birds around but they were quite distant. At the river there were many birds about including Griffon Vulture, an early southbound Osprey, Short-toed Eagle, Booted Eagle, the great sight of 2ad and 1juv Bonelli's Eagle, Common Buzzard, Peregrine, White Stork (flock of 10 flying over), Grey Heron, Little Egret, Little-ringed Plover, Eurasian Hoopoe, several European Bee-eater, Common Kingfisher, White Wagtail and several well-marked juvenile Corn Bunting.
On our way back to Gaucin we had a quick stop at Casares where we added Common Raven, Blue Rock Thrush and Common Swift to our list.

There are currently a lot of Scarce Swallowtail Iphiclides podalirius butterflies around, including this one along the Camino de Avedin: 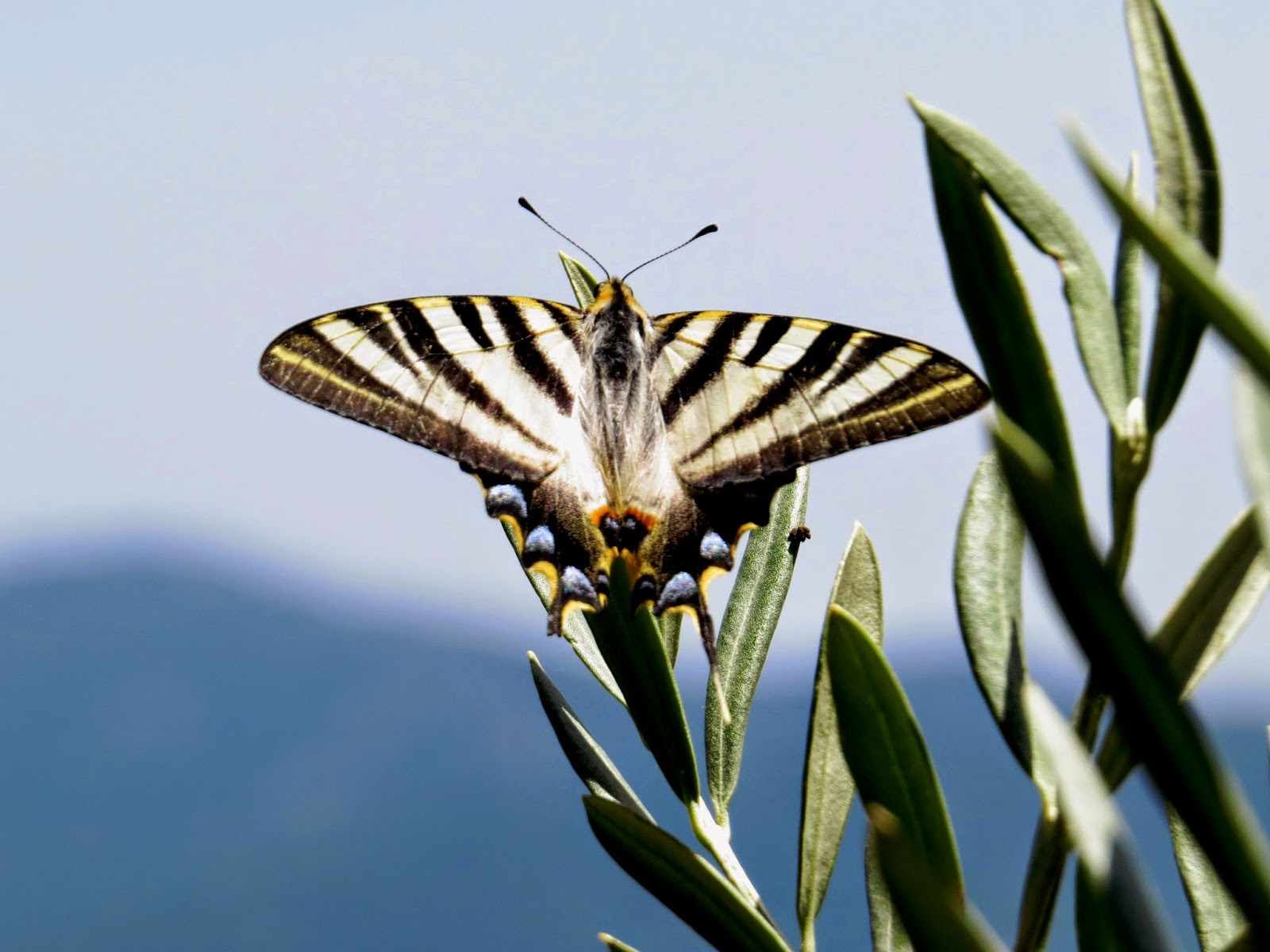 Walking under cloudy conditions from the Gaucin-San Roque road up to Castellar de la Frontera at 0730hrs the following were recorded:
Griffon Vulture, Short-toed Eagle, Booted Eagle, Common Buzzard, Lesser Kestrel (at least 10 in and around the castle), White Stork, 4 Turtle Dove, European Bee-eater, Crested Lark and Zitting Cisticola; there were at least 4 Bonelli's Warbler along the track through the woods and a Common Quail was heard in the grass surrounding the potato crop alongside the railway.
Posted by Paul at 11:40 No comments:

It's been very quiet birdwise over the last few days which is fairly typical for July. After a cool weekend with NW winds and temperatures in the low 20s the wind has now veered to levante and more summery weather has returned. There have been some early signs of post-breeding, pre-migration activity with House Martin forming small flocks, and messing about around the corners of buildings, and European Bee-eater making noisy forays over the village, groups of 4 or 5 over the weekend but a bigger group of 16 at 1915hrs this afternoon. At 1800hrs this afternoon a pair of Common Buzzard drifted across the south of the village and a lone pale morph Booted Eagle circled high above the Camino de Gibraltar.
Posted by Paul at 19:43 No comments:

As the summer continues to stumble on with low temperatures and an absence of the usual clear, hot July days, Wingspanner, John and I headed up to the Cueva del Gato near Benaojan to look for (White-throated) Dipper. After checking the river Guadiaro on the edge of the village without success we walked the 2km to Cueva del Gato where we spent a wonderful hour watching Alpine Swift (100+), Crag Martin and, most impressive of all, a family of European Water Vole Arvicola amphibius. Also here was Olivaceous Warbler with two adults that appeared to be still in the process of constructing a nest.
With no sign of the Dipper we started our walk back, taking a few minutes for a last scan of a likely spot - lo and behold, a Dipper duly appeared, see rubbish record shot! It was great to see this species in our local area.
On the walk back we also saw Griffon Vulture, Short-toed Eagle, Booted Eagle and Golden Oriole. All-in-all, well worth leaving home at 0700hrs for!

Back in Gaucin at 1830hrs, whilst scanning Sierra Crestellina, I picked up an adult Bonelli's Eagle and, flying E-W just this side of the Strait of Gibraltar, a flock of 12 White Stork.

After commenting on Sunday about the continued presence of the Common Nightingale it has now been quiet/absent since Monday! Hopefully it has just moved on and not met an untimely end. An early evening walk along the Sierra Espartina produced little birdlife aside from a Short-toed Eagle, Booted Eagle and a few Chaffinch amongst the pines.

Talking to another birder today we noted the distinct split in the Swift sp. populations, with the east side of the village holding mostly Common Swift and the west side mostly Pallid.