Nothing to do with Gaucin but everything to do with the indifference of government to the will of the people and to the protection of nature.....
Please click on the link below to view an article about the new fracking trespass law which was surreptitiously announced today.....deliberately timed to coincide with the parliamentary vote on air strikes against 'ISIS' or just fortuitous?

Fracking Law slides in under the radar.......

When is a SSSI not protected??
Nightingales under threat....
Posted by Paul at 22:51 No comments:

A few more Booted Eagle seen moving through today, with 3 at 1430hrs and a total of 6 between 1920-1940hrs; at 1940hrs, a group of 6 Honey Buzzard were also seen. Local Booted and Short-toed Eagle were present, too, and at least one Common/Pallid Swift.
Posted by Paul at 22:45 No comments:

The weather pattern is definitely more autumnal; there were a few big drops of rain today, but nothing measureable! Little to report for Friday/Saturday but Tim Birkhead recorded 2 (possibly 3) Bonelli's Eagle at Sierra Crestellina and 2 Turtle Dove at the Rio Genal below Gaucin on Friday. The last couple of evenings there have been 100+ House Martin in the Calle Convento/Calle del Pino area.

There was some migration action over the village this afternoon as follows:

During this time there were at least 3 Common Swift, 1 Barn Swallow and several House Martin around the south of the village.
Posted by Paul at 09:58 No comments:

At the Mirador de Africa (opposite the turning to Benarraba) at 1700hrs there were 3 pale morph Booted Eagle, a Short-toed Eagle and 2 Rock Bunting, plus two Common Swallowtail butterflies.

Tim Birkhead reported 80+ Griffon Vulture and 6 Common Raven, presumably feeding on a carcass, near Jimena de la Frontera; also 20+ Alpine Swift near Jimena and 2 Common Crossbill in pines on the north side of Gaucin village.

Today saw the first measurable rain, after yesterday's drizzle, with 15mm falling. There was little to see bird-wise, though during a brief dry interlude at 1745hrs a male Montagu's Harrier and 3 Common/Pallid Swift were over the village.

A couple of Griffon Vulture from yesterday....... 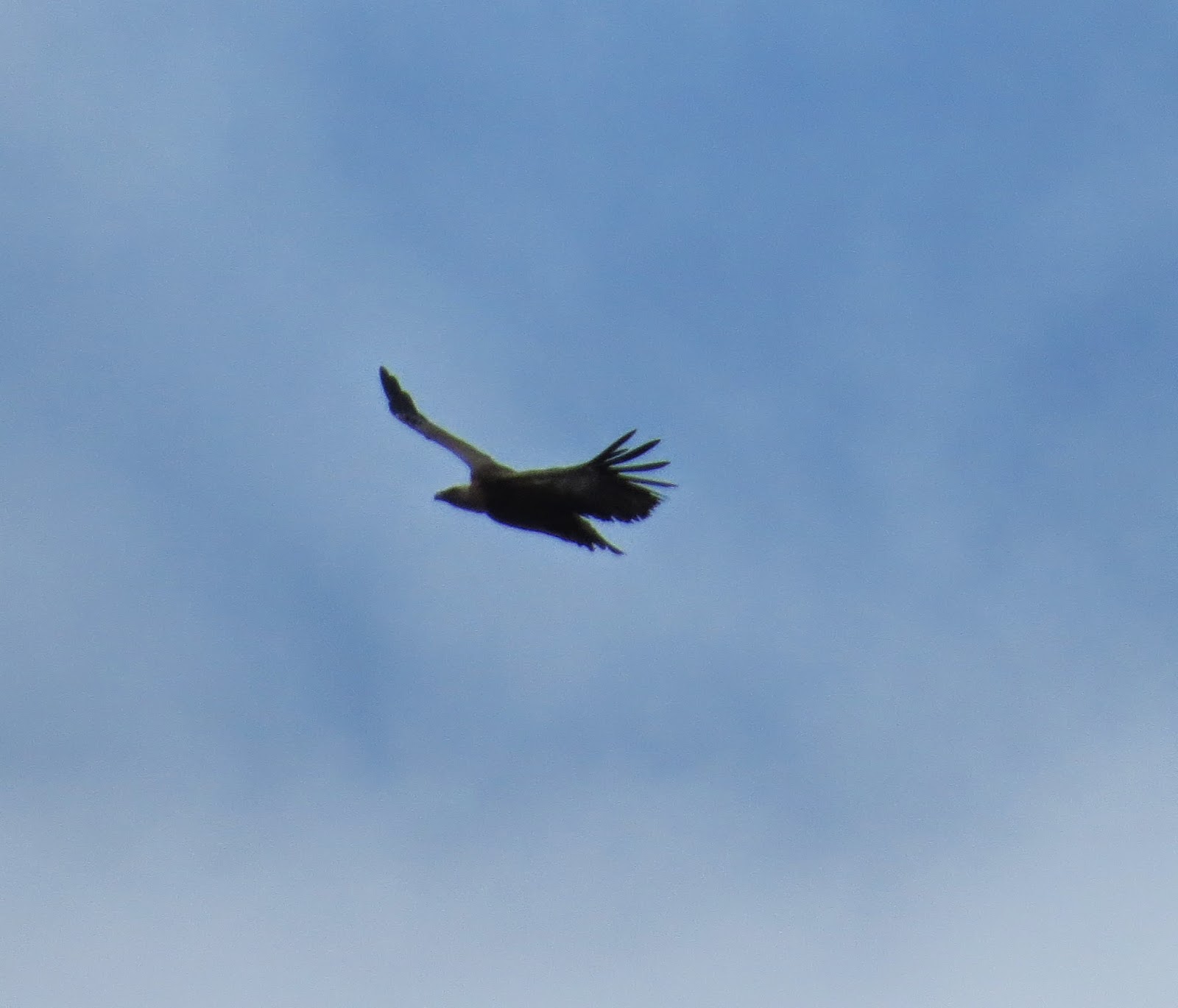 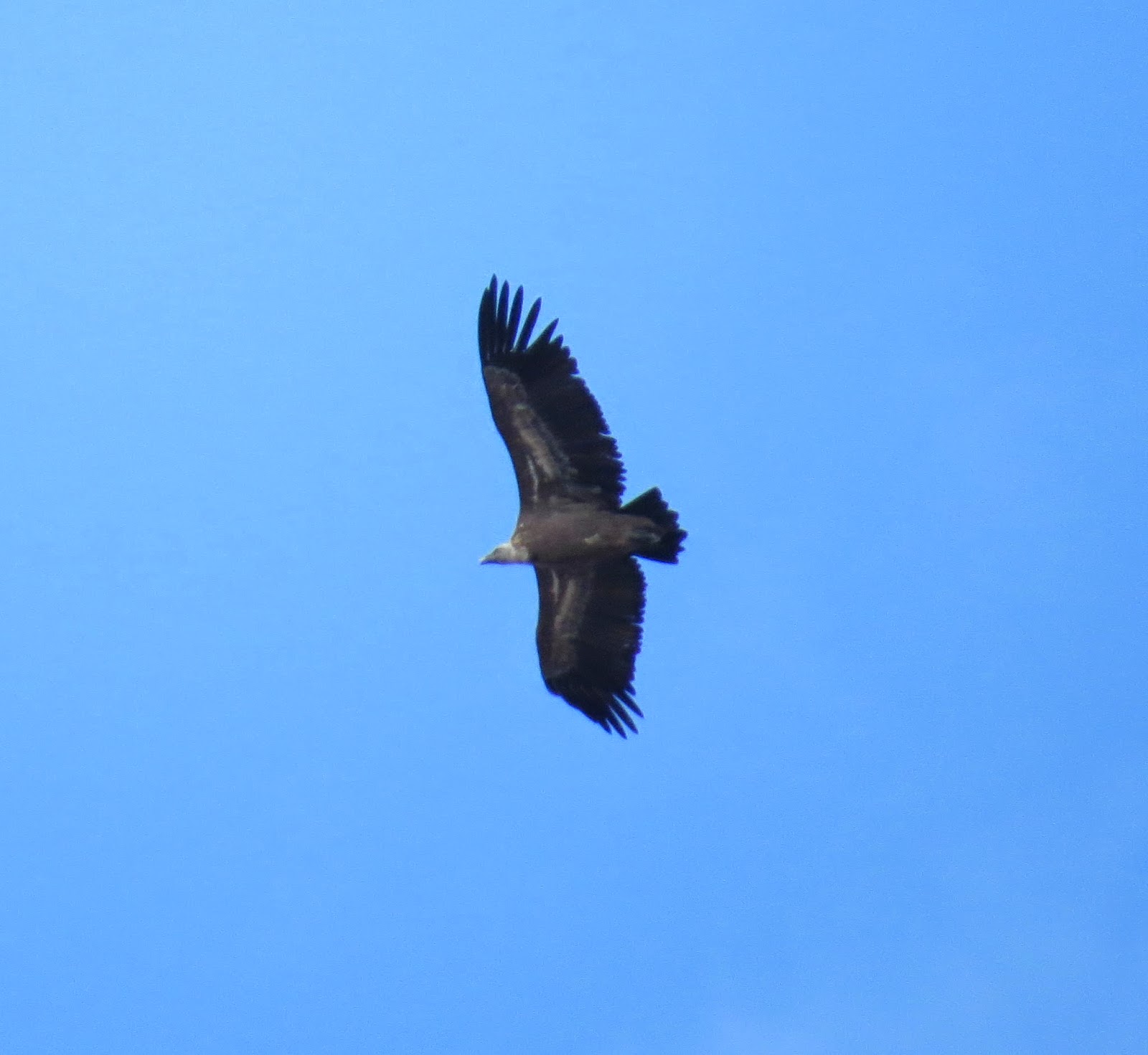 Today saw the first 'rain' (very light showers) since 24 June and the frequent brooding skies over El Hacho were a strange sight! Although the temperature did reach 26C at one point, for most of the day it was down in the low 20s. There was some light raptor passage throughout the day with 2 'kettles' of 15 Honey Buzzard just south-east of El Hacho at 1000hrs and small groups, including 10 Black Kite, and singles moving through between 1030-1130hrs. There were two 'local' pale morph Booted Eagle and a Short-toed Eagle around all day and small numbers of Honey Buzzard continued to move through during the afternoon; also seen was one Pallid Swift over Calle Convento and quite a few Griffon Vulture, the largest group being 30+. Tim Birkhead reported 70+ Griffon Vulture and a Montagu's Harrier over El Hacho during the afternoon.
Posted by Paul at 09:48 No comments:

Yesterday morning there was a Dartford Warbler behind El Hacho (northern side) and there were 2 Swift sp., over Calle Convento at around 2030hrs; Tim Birkhead reported the following:

This morning Tim and I took a trip out to the track that runs from Casares to Secadero, alongside the Rio Genal and later the Rio Guadiaro. It was a very pleasant start with little wind and good visibility and as we passed Sierra Crestellina, a group of 6 Red-billed Chough flew low over the road. On pylons next to the Rio Genal we had good views of 2 Short-toed Eagle and a Common Kestrel perched on telegraph wire long enough to be photographed. Other birds seen along the track included: Griffon Vulture, Booted Eagle, Lesser Kestrel, a 'kettle' of 17 Black Stork, Red-legged Partridge, Eurasian Hoopoe, Crested Lark, Stonechat, Sardinian Warbler and Cirl Bunting; European Bee-eater was heard but not seen.
At the Rio Guadiaro and in the adjacent fields we noted Grey Heron, Little Egret, Cattle Egret, Common Buzzard, Honey Buzzard, great views of a Marsh Harrier hunting over Alfalfa fields that were being irrigated by spraying, 6 Green Sandpiper, Little-ringed Plover, 20 Alpine Swift, Common Swift, Barn Swallow, Red-rumped Swallow,  Sand Martin, Common Kingfisher, White Wagtail, Whinchat, Zitting Cisticola, Serin and a group of four or five Rock Sparrow.
On the way back to Gaucin we passed through San Martin de Tesorillo and checked out the track to Marchenilla; it was now quite warm and there were very few birds around apart from a couple of Common Raven, Common Kestrel, a few Corn Bunting (singing their 'subsong'), 3 Willow Warbler, and at the river, a Grey Wagtail. Over 50 species seen or heard, not a bad morning's work.

Yesterday there was a Garden Warbler in the Calle Convento/Calle del Pino gardens at 0900hrs and a single Common Swift over Calle Convento at 2030hrs.

Tim Birkhead reported a Pallid Swift over Gaucin bridge both am and late pm yesterday, also 3 dark morph Booted Eagle and a Eurasian Sparrowhawk in the Genal Valley. This morning he saw a Stonechat on the roof of the old convent and a Northern Wheatear on an adjacent aerial, also a single Black Stork at Estación de Gaucin.

Thanks to Tim Birkhead for sharing these photos of what looks like a Viperine Snake Natrix maura catching its lunch.... 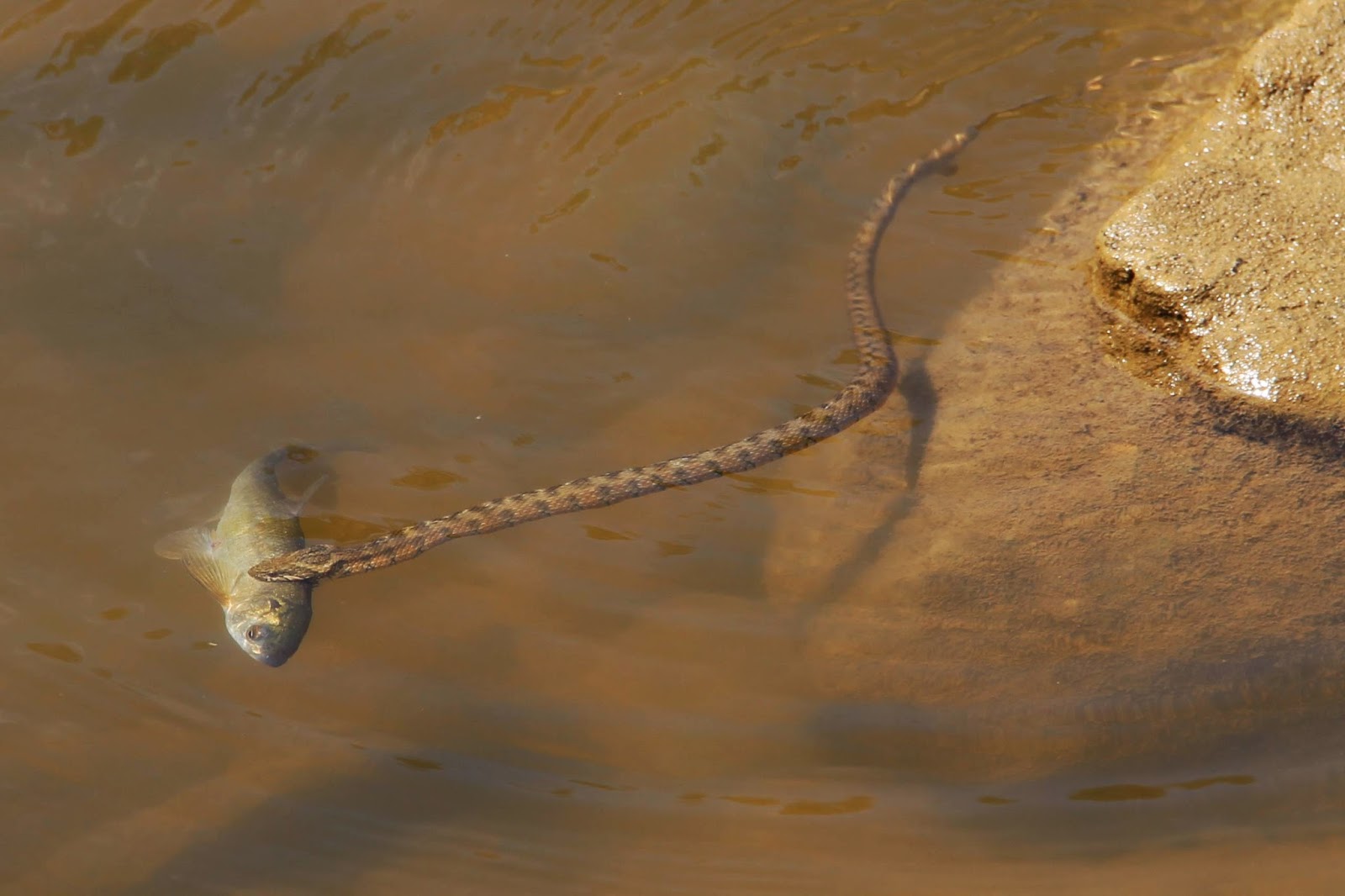 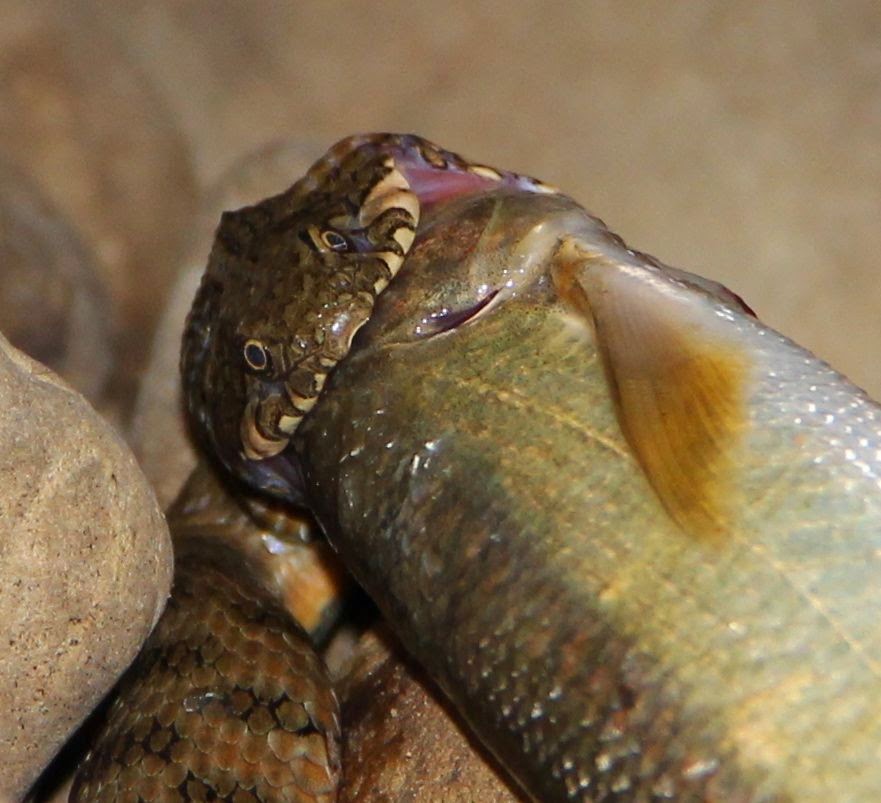 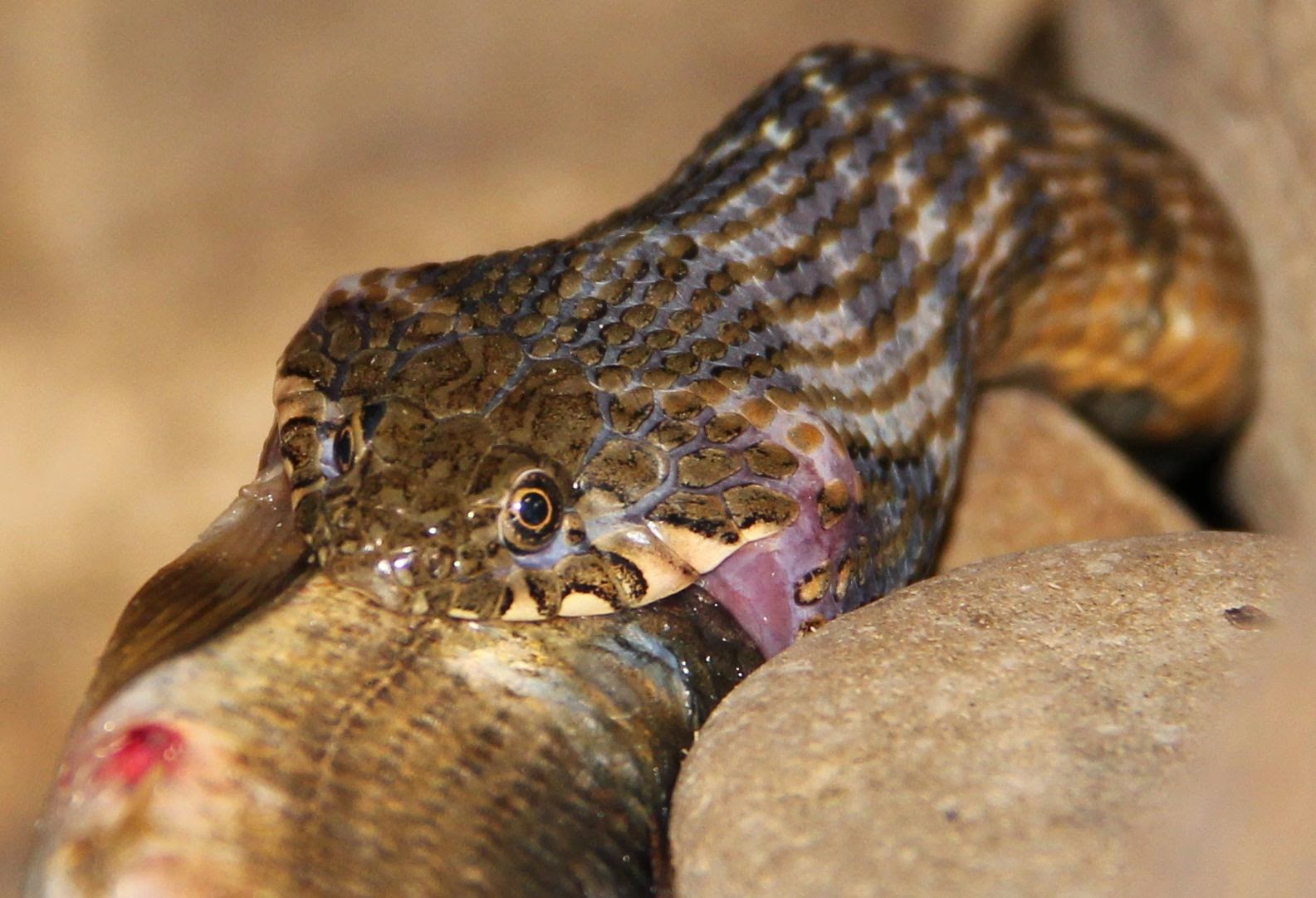 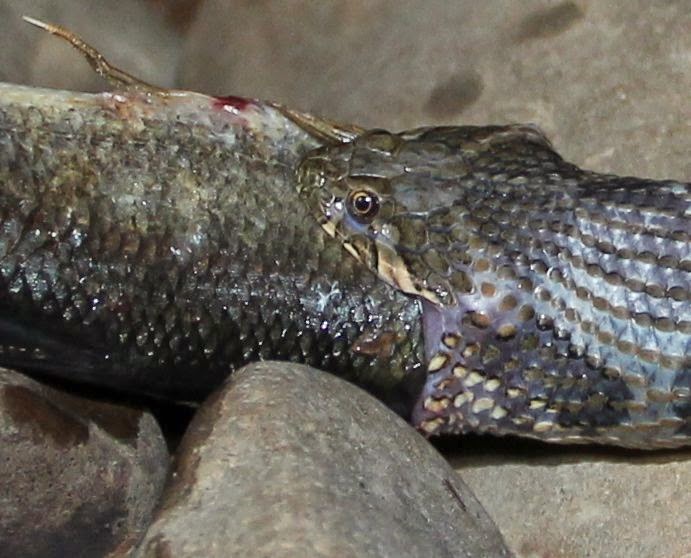 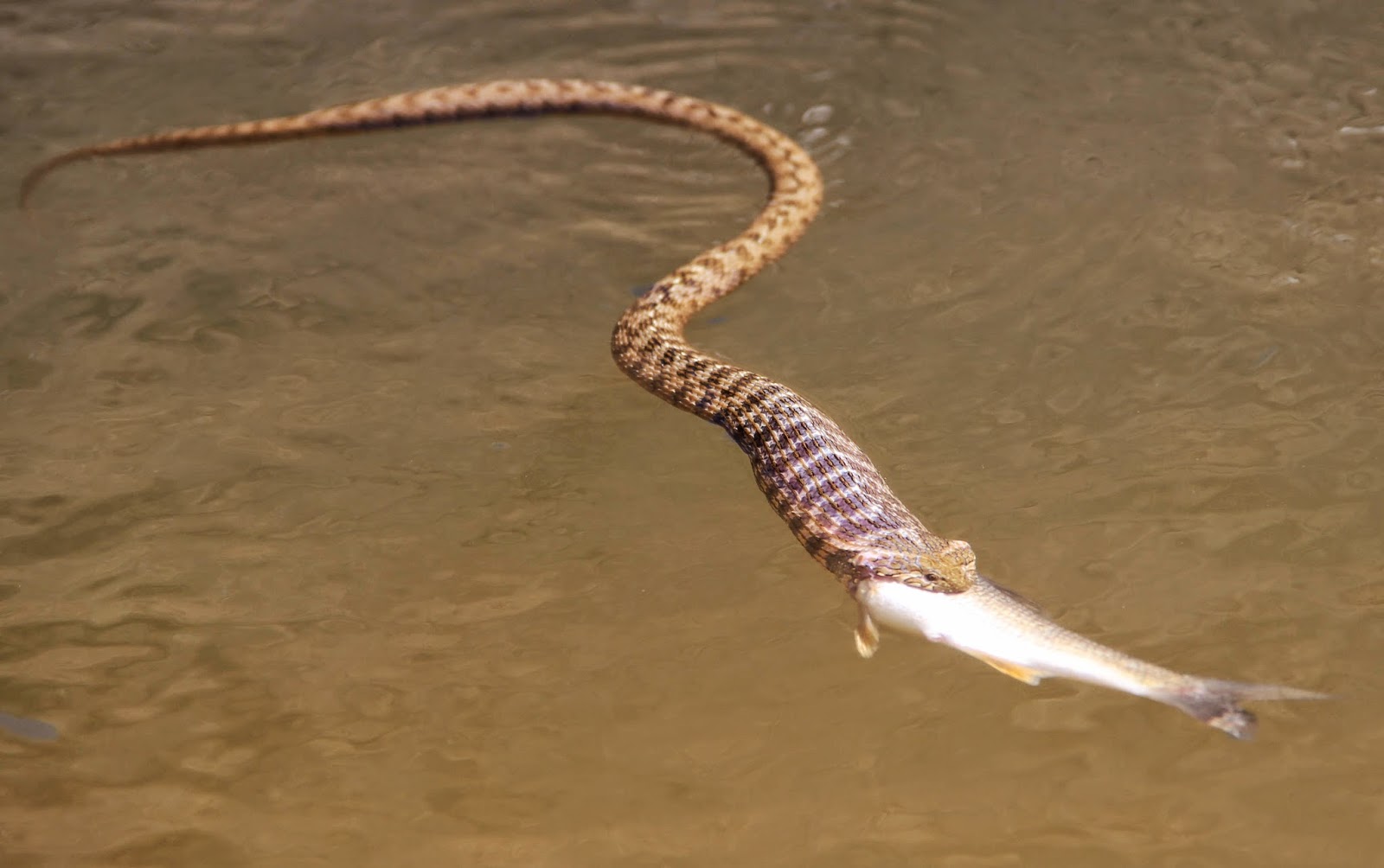 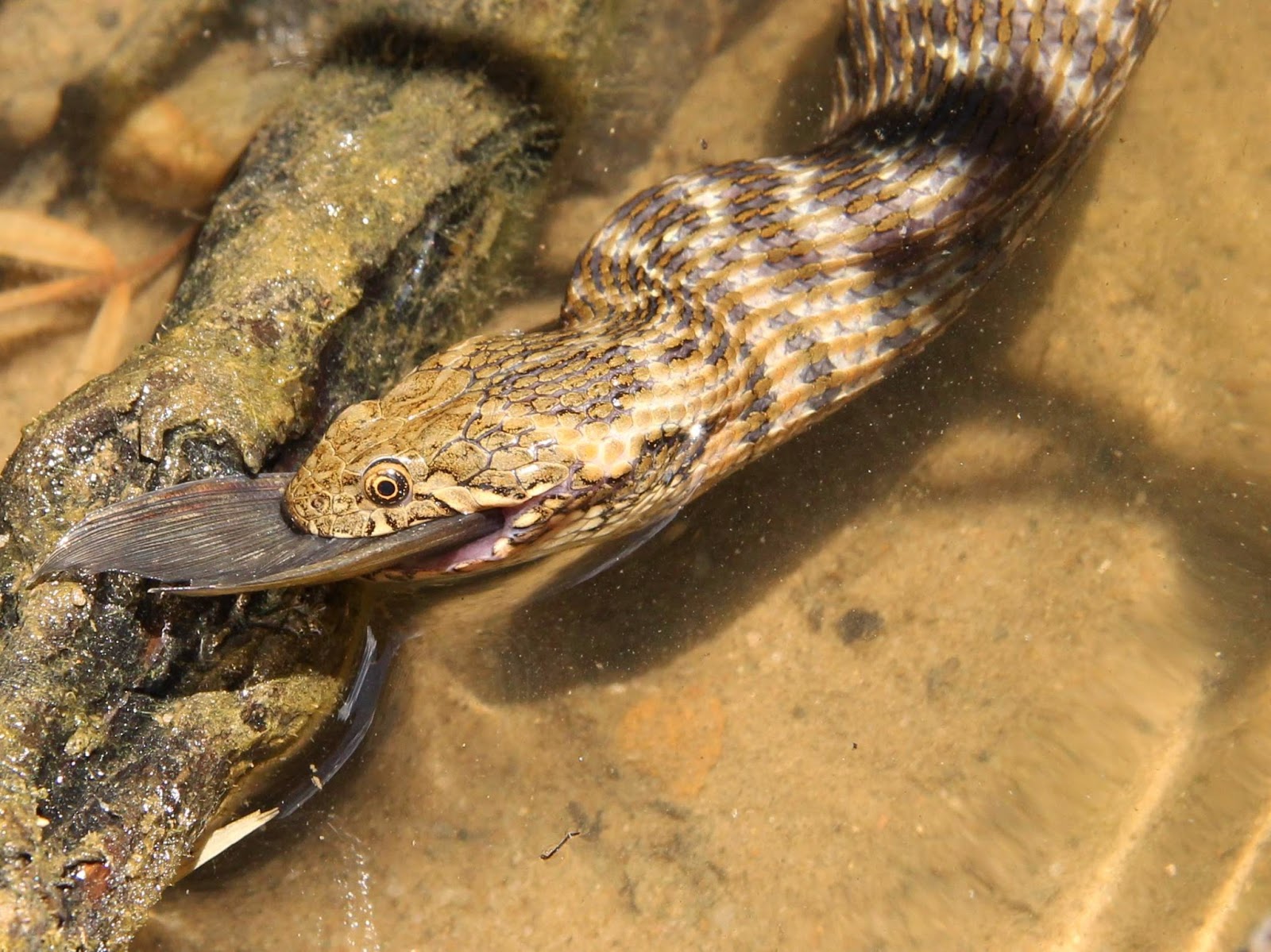 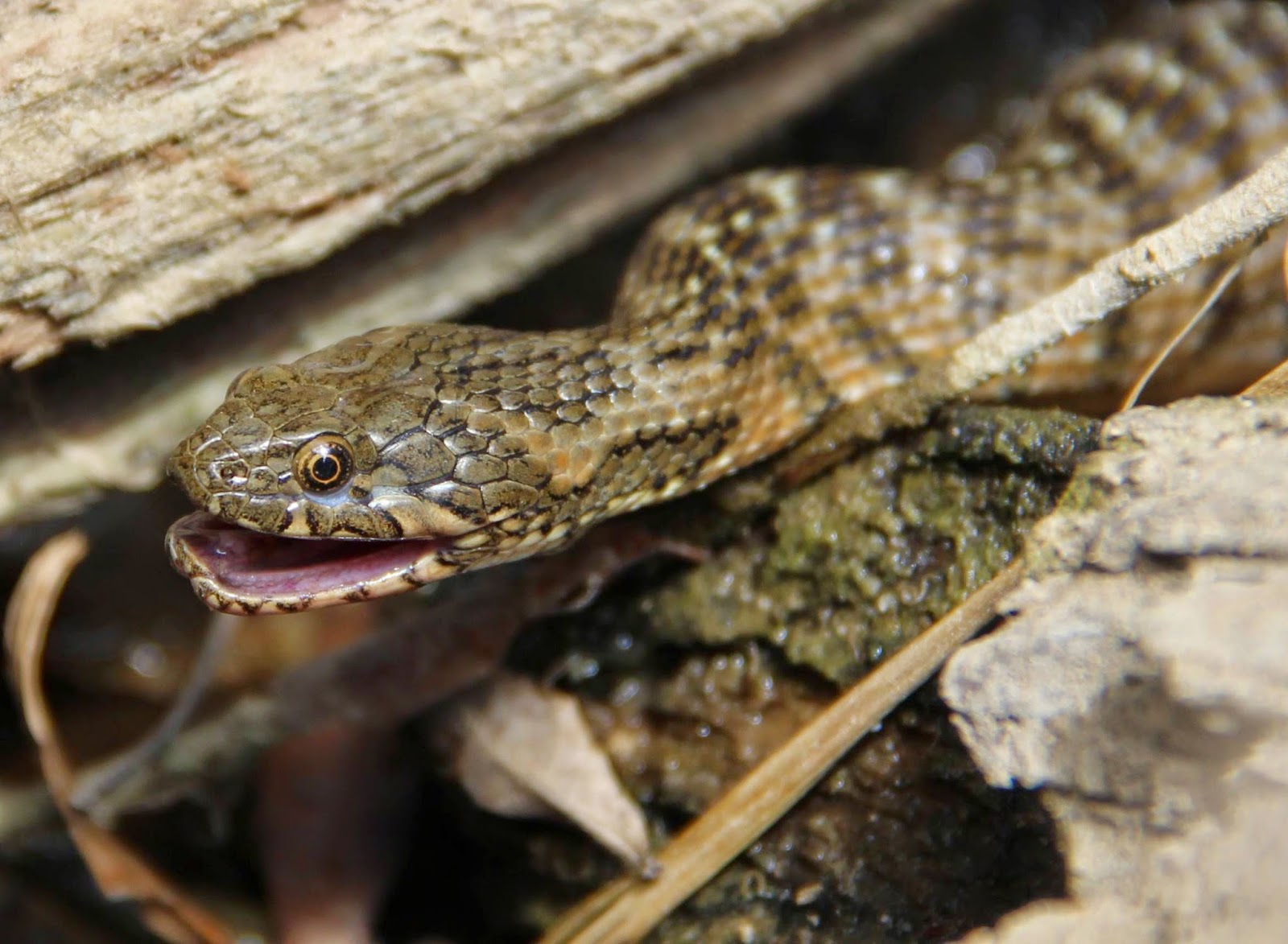 A visit to the west slope of El Hacho from 0900-1000hrs proved rather quiet but two birds that did show were a female/1st winter Whinchat and a female/1st winter Ortolan Bunting - not bad! Also seen were Griffon Vulture, Short-toed Eagle, Common Kestrel, Red-legged Partridge, Sardinian Warbler, Chiffchaff sp., and Cirl Bunting.

Tim Birkhead reported 6 Honey Buzzard and several European Bee-eater over the village during the morning.
Posted by Paul at 14:24 No comments:

The change in wind direction this morning from the prevailing westerlies lasted all of a few hours. Raptor passage is currently VERY high and mostly not visible with the naked eye, so just a few observations to note:


Tim Birkhead reported a female Eurasian Sparrowhawk perched on the roof of the Convento building which was harrassed by Starlings for about 15min before flying off; also 2 Swift sp., and 2 Alpine Swift over the village. Tim was down at the Cazalla raptor watchpoint near Tarifa where it was rather quiet but he saw Northern Goshawk, Egyptian Vulture and several Montagu's Harrier, Black Kite and Booted Eagle. Returning via san Pablo de Buciete he saw 20 Alpine Swift feeding with 100+ European Bee-eater.
Posted by Paul at 10:46 No comments:

Article on Wildlife Crime in Spain

Click on the link for an article on wildlife crime in Spain written for Birders Against Wildlife Crime:

http://birdersagainst.org/guest-blog-wildlife-crime-in-spain/
Posted by Paul at 09:25 No comments:

Watching the skies from 1700-1800hrs I logged the following:

Continuing westerly winds and poor weather further north means raptor passage remains quite quiet. This morning there were two Blue Rock Thrush around the castle, one singing occasionally. Over Camino de Avedin at 1600hrs there was a Peregrine, 2 local Short-toed Eagle and a pale morph Booted Eagle and moving through:
1625hrs: 7 Honey Buzzard and 1 Black Kite
1720hrs: 29 raptors, very high, but from what I could make out, mostly Honey Buzzard with a couple of Black Kite

Tim Birkhead reported 100+ Alpine Swift at 2000hrs today, hawking newly-hatched flying ants also a flock of 50+ European Bee-eater. I wrote off the Calle Convento Swifts too soon as there was a single Common Swift around at 2030hrs this evening.

There are quite a few butterflies around, especially Wall Brown (what a dull name for a great-looking butterfly), including this rather scruffy individual with part of its hind wing missing! 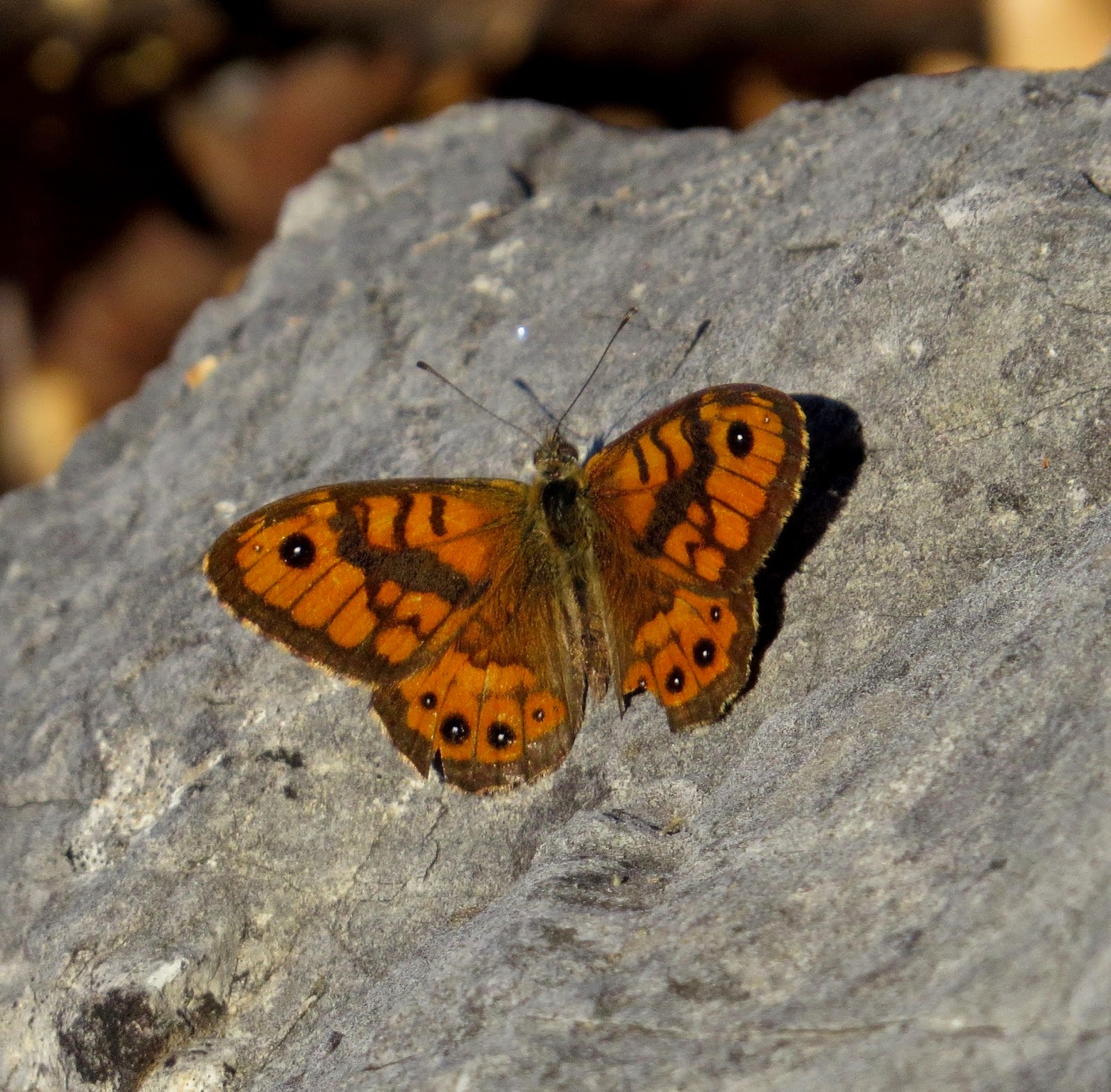 From Wednesday to Friday, three successive days of westerly winds brought very little in the way of migrating raptors over the village with just a few Honey Buzzard to note. Temperatures of 32-34C also meant less inclination to be outside observing, too!

Today it was a little cooler and there was a flurry of activity mid-afternoon, as follows:

There are still are still a few Swift sp. feeding at height during the day, again including one Alpine Swift today, but the last (Common) Swift in Calle Convento was seen on Thursday evening; there are a dozen or so House Martin around and a couple of Barn Swallow. There was an autumnal feel on a walk along Camino de Avedin at 0900hrs this morning as the carob or algarroba harvest was in full swing - though at a reward of just 30 centimos a kilo there wasn't much enthusiasm amongst those doing the harvesting - there were some autumnal birds, too with both Pied Flycatcher and a lovely male Common Redstart both putting in an appearance; also seen were 6 Common Raven, Great-spotted Woodpecker, Spotless Starling, several Firecrest, Short-toed Treecreeper, Eurasian Nuthatch, Crested Tit, Long-tailed Tit, European Robin (numbers increasing as wintering birds move in/through), Blackcap, Sardinian Warbler, Chiffchaff sp., and Bonelli's Warbler; Green Woodpecker was heard.

After a couple of days of light SE winds and temperatures in the late 20Cs with little to report but a trickle of ones and twos Honey Buzzard sightings, today saw some interesting early afternoon passage as follows:

The sun broke through around lunchtime after quite a cloudy morning. Whilst walking near Castellar de la Frontera between 0830hrs and 1130hrs there were lots of Honey Buzzard, Black Kite and Booted Eagle moving through, with great close views of all three species up near the castle; also seen was an adult Egyptian Vulture.

Back in Gaucin during the afternoon a quick look skywards at 1845hrs produced 20+ Honey Buzzard, several Black Kite and 2 male Montagu's Harrier!
Posted by Paul at 11:11 No comments:

Whilst walking near San Martin de Tersorillo during the morning sevearl groups of 20+ Honey Buzzard were seen. In Gaucin there were 12 Black Kite at 1830hrs, 9 Honey Buzzard at 1845hrs and, with half-a-dozen Common Swift at 1900hrs, a single Alpine Swift.
Posted by Paul at 11:04 No comments: