A very muggy, airless day today after yesterday's sprinkling of rain (just the 1mm!). I wrote the Swifts off too early as this evening there were 150+ over the southern fringes of the village, couldn't see an Alpine, though.

In contrast to a large part of last summer, this year's temperatures remain bearable and most days are blessed (unless you are birding!) with a fresh, cooling levante breeze.
Post-breeding, pre-return migration indicators are appearing with Swift sp. numbers down significantly, maybe only 50-or-so south of the village, 10-15 European Bee-eater on aerial electricity cables in the valley just to the south and House Martin beginning to congregate in 20s and 30s on telegraph wires. Amongst the Common and Pallid Swift early yesterday evening was an Alpine Swift, which came quite low over our terrace several times.
Despite the winds, a couple of walks around La Umbria produced the usual woodland species, with Great-spotted Woodpecker, Firecrest, European Nuthatch, Short-toed Treecreeper and Bonelli's Warbler all showing.
The dark morph Booted Eagle continues to parade over Calle Convento/Del Pino and a Short-toed Eagle, perhaps released from crèche duty, has been see a couple of times, too. A pair of Eurasian Sparrowhawk were seen in the woods just to the north of the petrol station on Saturday morning.

There have been reports of a few raptors already heading south over the Straits of Gibraltar at Tarifa; these are presumably non-breeders but it won't be too long before the main migration begins.
Posted by Paul at 17:15 No comments:

A very hot day today that coincided with the first 'wildfire' of the summer, between La Linea and San Roque. The fire, almost certainly arson, burned for most of the day and has no doubt destroyed a swathe of scarce coastal habitat. Let's hope there are no more.
A trip to Gaucin station yesterday enabled a visit to the Alcornocales natural park on the other side of the Guadiaro river valley.....all great, apart from the fact that the temperature was 38C which made birding pretty much impossible!
Locally we've had some stunning displays from the Swift sp. with 250+ in the air south of the village from 20:00hrs most days. Occasionally a Booted Eagle gets careless and is swamped by the smaller, more agile fliers! The European Bee-eater are just starting to move around again with small groups of 10+ swirling noisily over the village early morning and late afternoon.

Some rather strange weather yesterday with another sprinkling of dusty rain and an electrical storm during the early hours. The local Booted Eagle are performing well, particularly over Calle Convento/Calle del Pino where I've seen the dark morph individual hanging just a few metres above roof height - very impressive (but never when I have my camera with me!).
On a morning to visit to the west slope of El Hacho on Friday there were plenty of Sardinian Warbler and Stonechat on show, also a female Peregrine, a small covey of Red-legged Partridge including some very young fledglings, Crag Martin, Blue Rock Thrush and Cirl Bunting.
On Saturday evening there were at least 2 Alpine Swift amongst the Commons/Pallids flying around below Gaucín castle.
Walks around the footpaths to the north of the village (Venta Socorro- La Claridad) have produced Griffon Vulture, Booted Eagle, Common Buzzard, Eurasian Jay, Great-spotted Woodpecker, Green Woodpecker, Firecrest, Short-toed Treecreeper, Eurasian Nuthatch, Spotted Flycatcher, Iberian Chiffchaff, Bonelli's Warbler and Cirl Bunting. 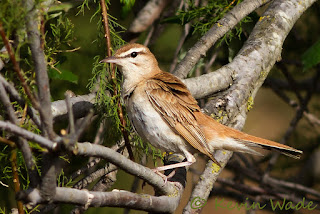 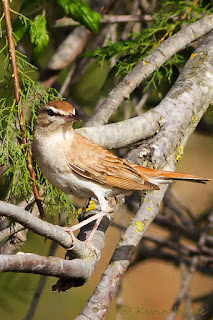