Following 7mm rain overnight it was a damp start to the day but it cleared quickly. A couple of 'armchair' observations....

Over the past few weeks I've been struck by the relative lack of birds around, in particular smaller passerines; I thought I was being overly-pessimistic but two people have, without prompting, mentioned the same thing to me. Could be nothing, or is there something amiss??

Spring came to a grinding halt today, after two days with a reasonable amount of sun but a chilly north-westerly wind, as the temperature peaked at 6C and 27mm rain fell between 0800hrs and 2200hrs. There are now at least 8 Swift sp. around Calle Convento/Calle del Pino, at least 4 of them being Pallid Swift; other than that, precious little to report bird-wise.
Posted by Paul at 15:27 No comments:

Just a few Black Kite moving through with 7 over the village at 1130hrs, 4 at 1145hrs and a single bird at 1715hrs. The local pair of Short-toed Eagle around to the South for most of the day as usual.
Posted by Paul at 10:15 No comments:

A Common Cuckoo was calling from just South of Gaucin from 0730-0830hrs. At 1230hrs a group of 7 Black Kite passed high over the centre of the village (they were very high, I only picked them up because I was checking a lower, but still quite high, group of Griffon Vulture); at 1300hrs there was an unusual sight of 45 Great Cormorant high over the Rio Genal just South-East of Gaucin - they circled for a few minutes before heading upstream. During the afternoon there were at least 2 Short-toed Eagle and one pale morph Booted Eagle and a Common Kestrel around to the South of the village.
Posted by Paul at 09:15 No comments:

A much better day than yesterday but, although seemingly ideal for raptor passage over the village, there was nothing to be seen. There was, however, a pale morph Booted Eagle over the centre of the village at 1200hrs and 3 Short-toed Eagle together at 1300hrs; also Blue Rock Thrush and Sardinian Warbler in full song below Gaucin castle.

A few butterflies around including these two....

1mm of rain fell this afternoon, the first since 02 March; a chance for this male Blue Rock Thrush to give its feathers a preen.... 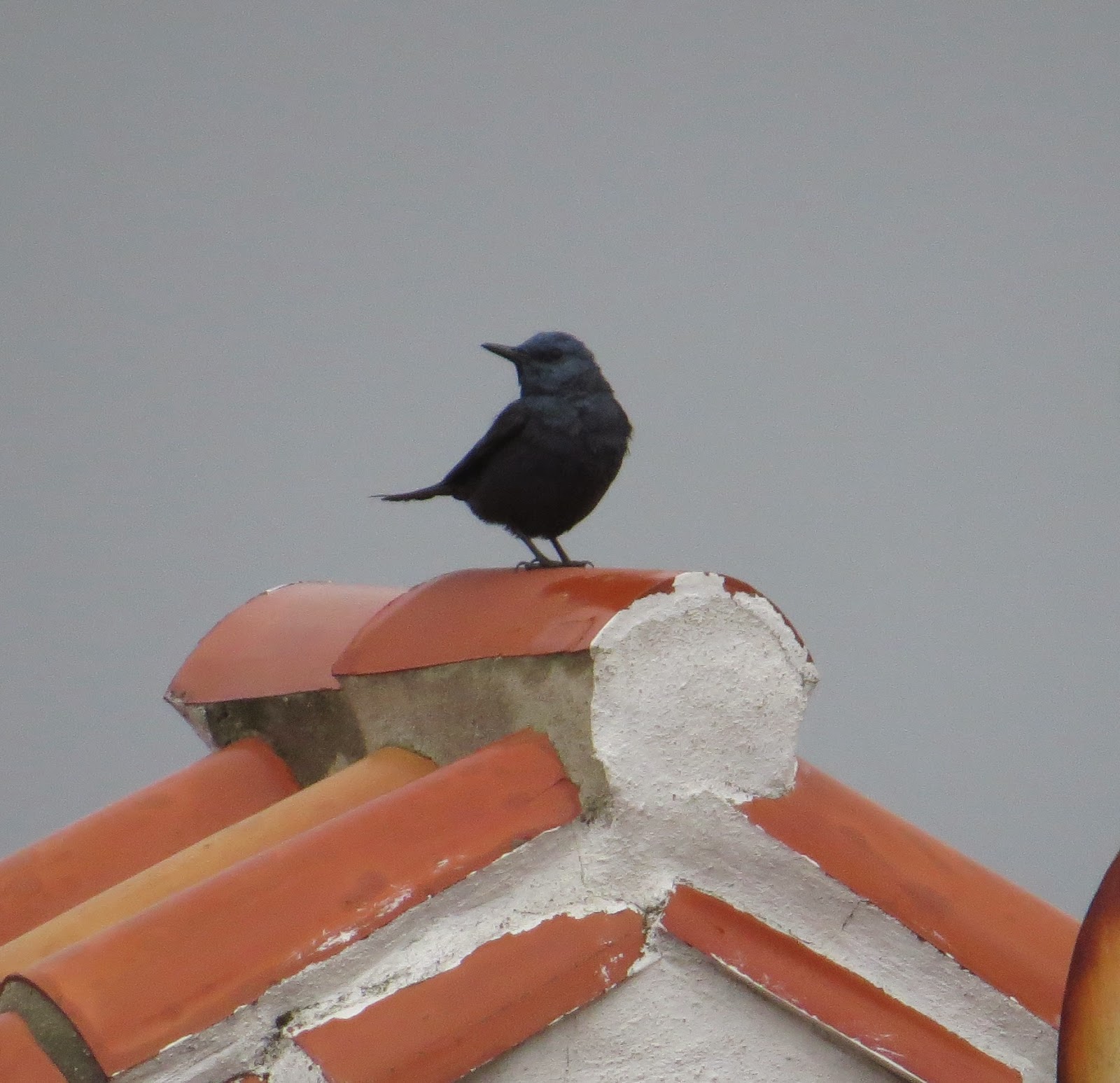 Please click the link below to read an article about a genuine threat to European vulture populations from the use of veterinary Diclofenac.

Diclofenac approval in the EU - bad news for vultures!

Please sign the change.org petition if you feel that use of Diclofenac for veterinary purposes within the EU should be stopped.
Posted by Paul at 23:19 No comments:

On the way back from the coast at 1700hrs I stopped to check the Bonelli's Eagle nest on Sierra Crestellina; within 5 minutes I'd seen 10+ Griffon Vulture, 2 adult Egyptian Vulture, 2 adult Bonelli's Eagle and a Red Kite! The Bonelli's were flying together some way from the nest so there's presumably no egg yet....getting a bit late? Back in Gaucin at 1900hrs I finally managed to get a good look at the Swifts that were flying between Calle Convento and Calle del Pino and can confirm that they are Pallid Swift.
Posted by Paul at 22:02 No comments:

Back in Spain....a few more House Martin and Barn Swallow around. Yesterday and today, there were a couple of Swift over Calle del Pino but only at dusk when a Common or Pallid ID was tricky! At 0730hrs there was a Common Cuckoo calling from the valley to the South of the village and there was a pale morph Booted Eagle over the South of the village at mid-day.
Posted by Paul at 22:30 No comments:

A beautiful Spring day ideal for watching migrant raptors, apart from the change in wind direction which seems to have pushed them all westward! There are now 2 Short-toed Eagle patrolling their territory just south of the village and mid-afternoon there was a flock of 40+ House Martin in the same area. Barn Swallow numbers up to 6+ in front of Hotel Fructuosa and around lunchtime there was a Peregrine, visible from Calle Convento, swooping in and out of a small group of Griffon Vulture that were circling the summit of El Hacho.
Posted by Paul at 10:40 No comments:


After a misty, cold start it turned into a warm, clear day. There were great views of 15 Black Kite and 3 Short-toed Eagle battling against a strong headwind just SW of Casares at 1030hrs and a further 17 Black Kite low over Gaucin at 1430hrs. It's not all spring-like as there is still a female Black Redstart in the gardens between Calle Convento and Calle del Pino.

An article relating to seabird research in the UK....

Nature Studies: We’re denying help to our seabird communities when they most need it

The timing couldn’t be worse. Thousands of birds have died in the storms.

Some truths are strongly counter-intuitive. For example, you simply would not think, would you, that seabirds can be killed by the sea? Creatures which have spent millions of years evolving in a particular environment, you might assume, would long ago have learned to deal with any difficulties which that environment might throw up. And you would be right. On the whole.

But there can be circumstances for which evolution has not quite prepared some living things, and the recent exceptional spate of Atlantic storms has been one of them. Not only did it bring flooding and destruction to parts of the human environment in Britain, especially in the West Country; it is becoming clear that British seabirds, in the Western Approaches particularly, have suffered a parallel natural disaster.
Tens of thousands of birds – particularly auks such as puffins, guillemots (pictured) and razorbills – have died as a result of the seemingly endless gales of the last two months. Their remains are now being washed up on the coasts of Wales, Cornwall and the Channel Islands, and even more so on the Atlantic coast of France – that is, the beaches of the Bay of Biscay, which is where large numbers of British puffins and their auk cousins spend the winter.
It is one of the largest “wrecks” of seabirds ever witnessed and bears comparison with the huge bird mortalities caused by the oil spills from tanker disasters of recent years, such as the Amoco Cadiz in 1978 and the Erika in 1999, both off the coast of Brittany, as well as the 1993 spill of the tanker Braer off Shetland and the 1996 spill of the Sea Empress off south Wales.
And counter-intuitive though it may be, it is indeed the sea that’s killing them. The birds are dying because this winter, they have had to expend too much energy fighting big waves and big winds over a long period at a time, when food is harder than ever to find, since fish shoals are broken up in the storms. Latest estimates from the Wildlife Trusts partnership suggest a confirmed death toll of around 25,000, which is expected to rise steadily as more corpses are washed ashore.
This natural disaster only serves to underline how vulnerable our seabirds are to other threats, such as the oil spills, and increasingly to two more dangers – climate change, and overfishing. Seabird colonies in northern Britain, in areas such as Orkney and Shetland, are doing increasingly badly – in some, only a fifth of the breeding birds are raising chicks – and this has happened because their food, largely small fish called sandeels, has disappeared. It may be because of too much trawling, or it may be because in rising water temperatures the sandeels have moved north – but they’re no longer available, and fears are growing that all British seabird colonies may similarly suffer.
Yet just at this very moment, the single most sophisticated tool for monitoring seabird populations in Britain is being thrown on the scrapheap by a new Welsh quango. Natural Resources Wales, set up last year to incorporate the old Countryside Council for Wales with the Welsh sections of the Environment Agency and the Forestry Commission, is abolishing the funding for the long-term monitoring of the large guillemot colony on Skomer island – it has more than 20,000 pairs – off the coast of Pembrokeshire.
Carried out by the University of Sheffield under Professor Tim Birkhead, this has been going on for 40 years and is so detailed that it can detect real (as opposed to apparent) influences on the colony’s population very quickly. There is nothing else quite like it in Britain – yet it’s being scrapped “so that we can provide best value for money”. It strikes me as crazy. The funding is peanuts in corporate terms – £12,000 a year. Hedge funders spend more on a single bottle of wine.
“This programme generates absolutely critical data,” said Dr Lizzie Wilberforce, conservation manager of the Wildlife Trust of South and West Wales. “The funding is being withdrawn just when we need it most. The timing couldn’t be worse – we really need to understand how our birds are reacting to these threats if we are to be equipped to help them.”
As you look at the images of dead seabirds, then, remember the name:  Natural Resources Wales. It’s a moderately obscure new quango, and the chairman, Professor Peter Matthews, and the chief executive, Dr Emyr Roberts, have had hardly any national publicity. But they’re going to get some now, for one of the most irredeemably stupid decisions that a body supposed to have the protection of the natural world at its heart could possibly take.
Posted by Paul at 21:43 No comments:

At 1630hrs a couple of Black Kite moved through to the east of Gaucin, passing just behind the castle; also two reported from Casares at 1030hrs.
Posted by Paul at 08:58 No comments:

March got off to a wet start with 15mm rain falling on Saturday and another 9mm today; with Gaucin in cloud for much of the weekend there was little to see apart from a few Griffon Vulture drifting around and the occasional House Martin as a reminder that spring migration is underway!
Posted by Paul at 10:41 No comments:

This morning at 1000hrs, 80+ Black Kite passed over Castellar de la Frontera; Lesser Kestrel are back with 10+ at Castellar castle and 6 at their usual colony near the bridge over the Rio Hozgarganta on the Gaucin-San Roque road.
Posted by Paul at 09:12 No comments:

Warm out of the wind. A good day for raptors with the following all viewed over the Genal valley from Camino de Avedin: 20+ Griffon Vulture, 6x Short-toed Eagle, Peregrine, Common Buzzard, Eurasian Sparrowhawk and Common Kestrel; also a probable female Marsh Harrier but it was too high for a positive ID. Over the west slope of El Hacho from 1700-1800hrs there were 10+ Griffon Vulture, 2x adult Egyptian Vulture, 2x Peregrine, Thekla Lark and a flock of 100+ Goldfinch.

During the past few days there have been a number of butterflies around including Large Tortoiseshell, Spanish Festoon, Cleopatra and Small Copper.
Posted by Paul at 09:07 No comments: