We checked on the old Bonelli's Eagle nest on Sierra Crestellina and, as others have reported, the site now seems to be occupied by Griffon Vulture; as yet there are no clues as to where the eagles have gone.

In the village over the past couple of days there have been a scattering of Honey Buzzard, most notably around mid-day on Thursday when 20+ flew very low over Plaza del Santo Niño. There were two juvenile Blue Rock Thrush and an adult male on a ruin in Calle Convento, suggesting that they most probably bred there this year - a good record for the centre of the pueblo following breeding in 2015 in a ruin adjacent to cafe/bar El Puente.
Posted by Paul at 16:48 No comments:

This afternoon there was a juvenile Blue Rock Thrush begging for food from a male on one of the ruins in Calle Convento: 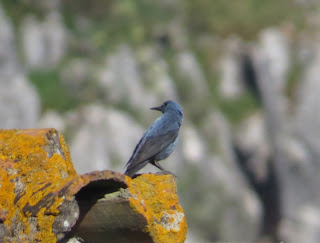 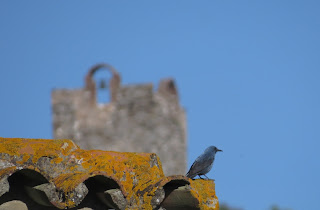 Today continued a nice run of clear, warm days during which there was very little bird news! On Wednesday lunchtime there was a single White Stork high over Calle Convento and on Thursday at 20:30hrs 3 Honey Buzzard were heading north over the centre of the village.

There was a male Common Kestrel cruising around and vast numbers of Swift sp., many taking advantage of the exponential increase in insects since the recent rains, also a good number that looked like migrants as they were very high and heading determinedly northwards.

After 9 consecutive days of rain (the Mays of the previous 3 years had just 3 days each) today was dry, if you discount the 1mm that fell in the early hours!

There were 2 Black Kite just north of El Peso during the morning and another 4 low over the village around mid-day. 3 Common Crossbill flew over Calle Convento late afternoon but the star performance was by 4 Red-necked Nightjar that hawked insects low over our terrace between 21:45 and 22:00hrs. We used to see these wonderful birds each Spring around this time but in recent years they've not been so reliable; great to see them back!

After experiencing temperatures of 25C+ in London over the weekend, it came as a bit of a shock to return to a cold, damp Gaucin. The past five days have all seen significant rainfall, with more than 60mm falling in total since Friday when 3 Black Stork were reported over the village.  On Saturday a European Roller was reported (thanks to Julie and Pete) on telephone wires between San Pablo de Buceite and Los Angeles (Estacion de Jimena) - pretty much in the same place where one was seen in July 2012 and not far from other sightings in July 2013; couple this with a juvenile seen about 5km away in late July 2013 and it adds up to a strong possibility of breeding in the area.

Some good vulture news for a change!

Three Bearded Vultures released in Andalucia
Posted by Paul at 20:11 No comments:

Very little to report over the last few, sunny and warm, days. A handful of Honey Buzzard and the usual 'local' Booted and Short-toed Eagle sightings but no big migration numbers - as others in the region have also reported. This afternoon there was a Blue Rock Thrush singing away on a rooftop in Calle Convento and also a male on the building next to cafe El Puente - this could mean there are two pairs breeding within the village, which would be great. Down on the Rio Genal on Monday there were at least 3 Little-ringed Plover but no sign of the Common Sandpiper from the other day; also Golden Oriole singing but not seen.

Some nice flowers around the north of El Hacho this morning: 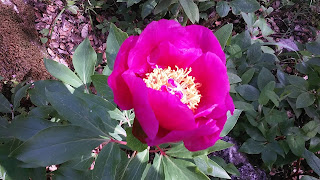