Saturday 30 June: final photos from Extremadura last month....all from the Gredos mountains area apart from the Great Reed Warbler which was seen at several other sites. First up a rather distant but superb male Rock Thrush... 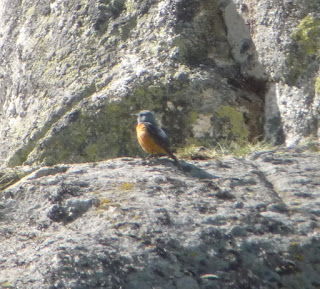 An impressive Ocellated Lizard. This one was about 30cm long but they can grow to 90cm... 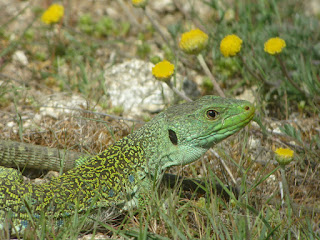 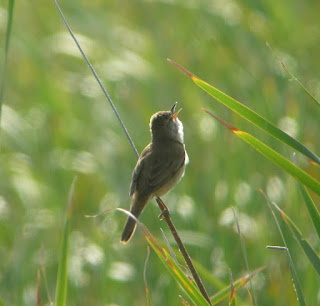 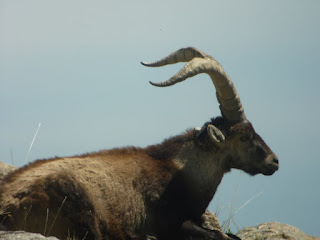 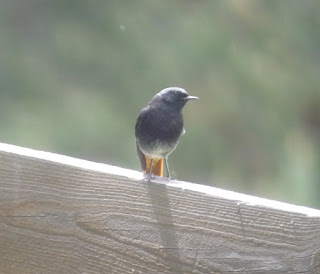 Not a great photo, but my first sighting of Red-backed Shrike... 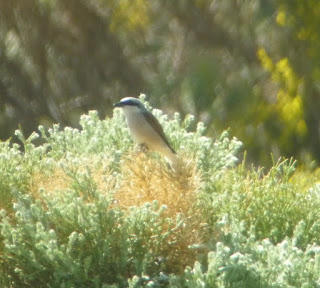 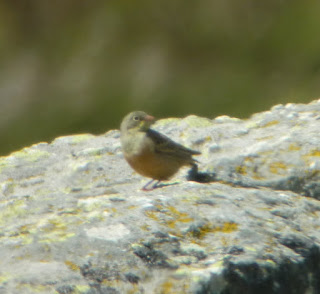 Saturday 30 June, sunny, light-fresh NW wind, 28C: Thankfully cooler today (never satisfied!) in the NW wind but little to report on the bird front....an Alpine Swift with a small Common/Pallid Swift flock just to the south of Gaucin at 1730hrs and a Sparrowhawk drifting around in the same area at 1930hrs. Common Buzzard calling from down in the valley to the south of the village during the afternoon.
Posted by Paul at 20:03 No comments:

Thursday 28 June, hazy sunshine, light SE wind, 37C: very warm again today, reaching 39C just a couple of km south of Gaucin village. The coast was cooler early afternoon (1300hrs) at about ~29C and whilst there I made a quick visit to the 'chullera' heath behind Duquesa. There wasn't a lot of activity but I did see Lesser Kestrel, Turtle Dove (heard), Woodchat Shrike, Bee-eater, Common Swift, Barn Swallow, Red-rumped Swallow, Stonechat, Sardinian Warbler, Serin and at least 200 House Martin on a couple of telegraph wires.
Posted by Paul at 19:45 No comments:

Tuesday 26 June, mainly overcast, occasional short sunny spells, still air-light SE wind, 30C: Another very humid day but I ventured out at 1830hrs along the Camino de Gibraltar just down to the, currently not working, water treatment plant. Clearly most birds had more sense as it was very quiet with just a few Common Swift, House Martin and the occasional Barn Swallow swooping overhead. Things perked up a bit around 1930hrs with two Booted Eagle passing over (probably the same pair that were displaying earlier in the afternoon above Calle del Pino) and in the far distance towards Sierra Crestellina there were three Bee-eater (there have been very few locally this summer) and a patrolling adult Bonelli's Eagle. Other than that there was White Wagtail, Serin, Goldfinch and Greenfinch. Cirl Bunting and Cetti's Warbler were heard.
Posted by Paul at 09:45 No comments:

Monday 25 June, overcast, humid, light SE wind, 28C: Not much to report....a couple of Booted Eagle over the south of the village yesterday afternoon, also a female Sparrowhawk getting the 'treatment' from the Swift flock. This morning I went to check on the Red-rumped Swallow nest at Loma de Avedin and it seems that, despite it being so dry, they are managing to find some mud somewhere and are continuing to build (see photo). 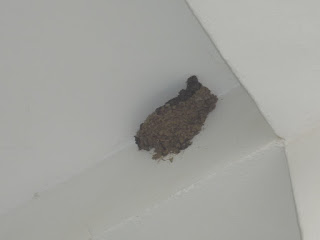 Saturday 23 June, cloudy start, clearing mid-morning, light SE wind, 26C (at 1100hrs): This morning I visited one of my favourite spots, a rural track close to Barca Morena near San Pablo de Buciete. It was a cloudy/humid start, with hundreds of tiny biting midges and several locals collecting wild fennel and/or snails making it hard to concentrate on birding, but the wind soon got up a bit and the skies and the midges cleared. There were some good species around today including the site 'mascot', Rufous Bush Robin , (there were several individuals, including at least one juvenile and one singing male), Woodchat Shrike (including juveniles), Griffon Vulture, Common and Lesser Kestrel, Common Buzzard, Booted Eagle, Short-toed Eagle (at least 4), Raven, Little Owl, Collared Dove, European Bee-eater, Tawny Pipit (including displaying male and juveniles), Spotless Starling, Crested Lark (see photo of one with what appears to be an unfortunate grasshopper), Barn Swallow, Red-rumped Swallow, House Martin, Stonechat, Common Whitethroat, Sardinian Warbler, Melodious Warbler (they were everywhere, at least 20 birds including many juveniles and recent fledglings, see photo), Goldfinch, Greenfinch and Linnet. 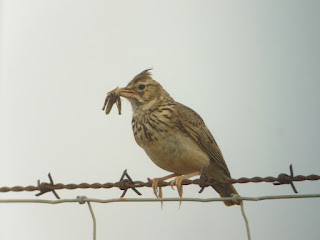 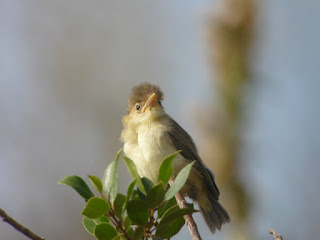 Thursday 21 June, sunny, light NW wind, 27C but feeling hotter in the strong sun! A morning visit to the Rio Guadiaro at 'Estacion Cortes' was rewarded with a sighting of the elusive, and rather rare, White-rumped Swift. It took twenty or so minutes of scanning the Common/Pallid Swift flocks but a single individual eventually showed itself at quite close quarters for half a minute. Just to prove how hard it is to find this species I couldn't relocate it during the next hour. Other birds seen included Griffon Vulture, Short-toed Eagle, Common Kestrel, Little-ringed Plover, Turtle Dove (heard), Alpine Swift, Woodchat Shrike (including juveniles), Kingfisher (see photo), Spotless Starling, Barn Swallow, Red-rumped Swallow, White Wagtail, Grey Wagtail. Great-spotted Woodpecker, Green Woodpecker, Nightingale, Cetti's Warbler and Cirl Bunting (all heard), Sardinian Warbler, Linnet, Greenfinch (see photo) and Goldfinch. 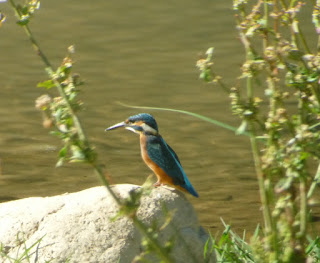 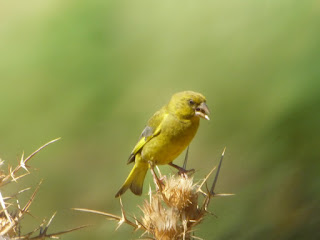 It's always nice to see the Sweet Chestnut trees in full bloom...see photo. 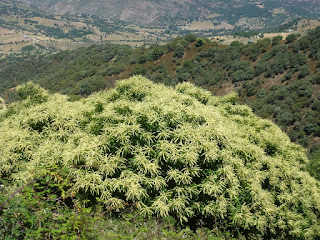 Wednesday 20 June, sunny, warm, light-fresh SE wind, 29C: 0930hrs, amongst the many Swifts feeding high just to the south of Gaucin was one Alpine Swift.
Posted by Paul at 14:05 No comments:

Saturday 16 June, Gaucin, sunny, hot, light-fresh S wind, 34C: No respite from the heat today with a hot southerly wind adding to the oven effect - it's early in the summer to be getting temperatures as high as this. Birding opportunities have been few and far between but there have been a few Booted Eagle around and this afternoon a well-marked Short-toed Eagle was above the Gaucin-El Colmenar turning. There is a pair of Red-rumped Swallow trying to nest-build on a house on the Loma de Avedin in Gaucin but as it's so dry they must be having difficulty finding any mud (see photo of early-stage nest); this is the first time I've seen this species nesting so close to Gaucin. This evening the Swifts were on fine form with some coming within less than a metre of me. Interestingly, many were landing on the house roof and seemingly resting a few seconds before rejoining the rest of the flock. 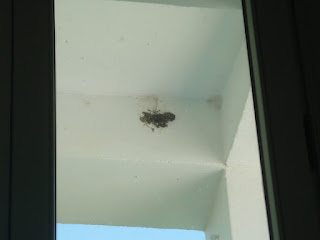 Sunday 10 June, Gaucin, a very warm day today, it was already 26C by 1000hrs and reached 33C during the afternoon: A good record of a Hobby passing over the village from the south at 0930hrs.
Posted by Paul at 20:04 No comments: 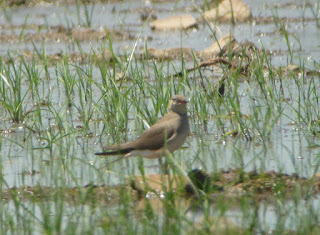 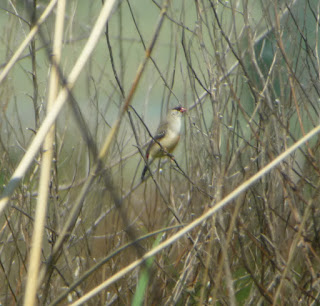 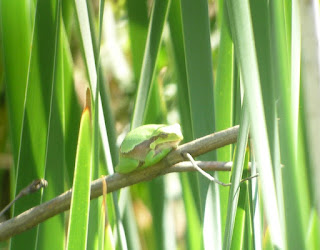 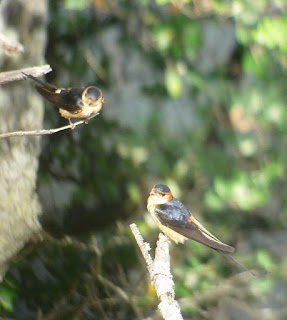 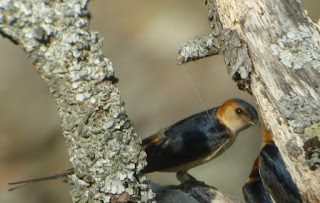 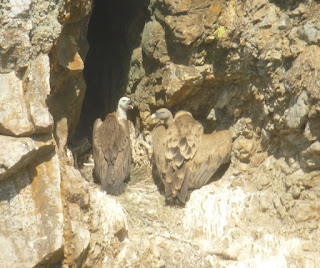 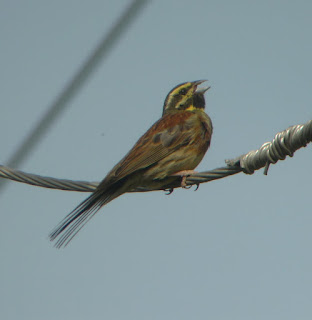 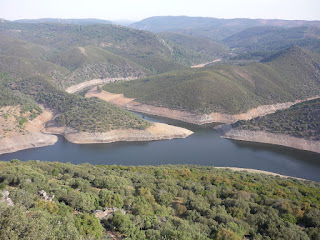 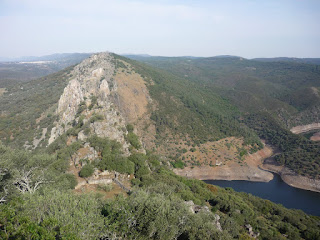 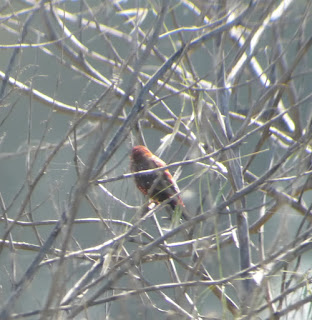 An Azure-winged Magpie on the rice fields...we saw many of these birds and they were flitting around Finca Santa Marta all day, but they hardly ever stood still! 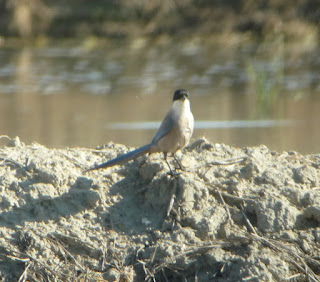 Wednesday 06 June, sunny, light S-SW wind, 33C: Another hot day....yesterday a Sparrowhawk tried it's luck mid-afternoon with the swifts just above our terrace in Calle Convento; with a loud 'whoosh' the predator dived amongst the prey but with a couple of quick direction changes the swifts were gone and the Sparrowhawk was left hungry - as it has been everytime I've seen it chasing swifts! A couple of photos from Extremadura last week....a bridge over the Rio Almonte and the White Stork nests in the grounds of Finca Santa Marta: 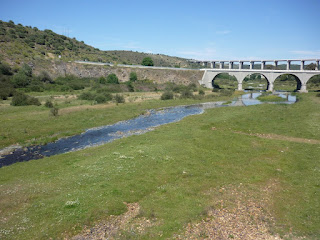 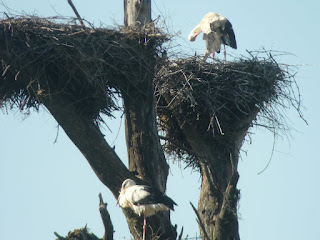 Monday 04 June, Gaucin, light W wind, sunny, hot, 28C: Not much to report for the last few days. It has been very warm, 34C nearer the coast today, and I've had other things to do after being away for a week! A couple of Red-billed Chough flew across the valley just to the south of the village; the Swifts are here in great numbers, enjoying the abundance of small flies; both Cuckoo and Nightingale are singing regularly in the valley to the south; occasional Booted Eagle sightings throughout the day. Hoping to put some of my Extremadura photos up soon - there are not many good bird ones due to viewing distances and the constant heat haze!
Posted by Paul at 09:50 No comments: