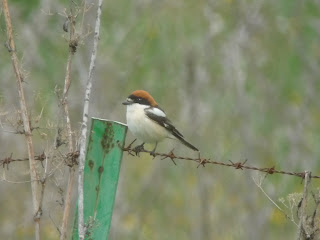 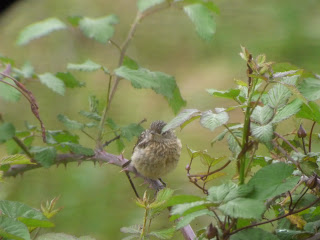 Sunday 27 March: Just remembered we heard a Cuckoo, too, and saw a female wild boar with about 10 little stripey piglets!
Posted by Paul at 14:43 No comments:

Saturday 26 March, light westerly breeze, mostly sunny: The first Bee-eater sighting of the year with a group of 9 passing directly over Gaucin village at 1745hrs, also a Sparrowhawk and a light morph Booted Eagle.
Posted by Paul at 19:09 No comments:

Friday 25 March, 0930hrs, light E wind, partly cloudy: Both Sparrowhawk and Goshawk seen from Gaucin village in the valley to the south. 1415hrs: Booted Eagle over the village - my first this year but I'm sure there must have been earlier ones. 1630-1730hrs - disused cement works behind El Hacho, Gaucin - Pair of Short-toed Eagle, 2x Booted Eagle (1 pale morph, 1 dark morph), Peregrine Falcon, Common Kestrel, Thekla Lark, several pairs of Stonechat, Black Redstart, Song Thrush. I also saw two raptors that I saw over the village late yesterday afternoon but couldn't identify as they were very high up - unfortunately they were still high up and I only viewed them for a couple of seconds before they flew off behind El Hacho but they looked like two juvenile Bonelli's Eagle, one much paler underneath than the other. Hopefully they'll stick around and I'll get some better views!
Posted by Paul at 10:22 No comments:

Wednesday 23 March: Back in Gaucin to cold and cloudy weather - what happened to Spring? Nothing much to report other than a pair of Short-toed Eagle displaying down in the valley below the village during late afternoon and an increase in the number of Swift. We are still stuck with fresh SE winds so not ideal for migrants over the village.
Posted by Paul at 09:43 No comments: 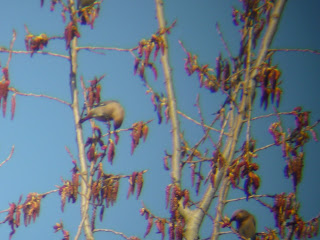 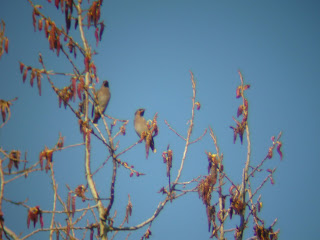 Saturday 19 March: Decided to have another look for the Waxwing so got up at 0600hrs and braved the frost to head off to Morrison's car park in Woosehill near Wokingham. Shortly after I got there I bumped into the guy who saw them yesterday and we spent an hour looking for them without success. He then left to go home and I carried on looking - after about 10 minutes he came running back excitedly telling me he'd seen a flock of 21 Waxwing in some Poplar trees about 200m away. We spent another 30 minutes looking before he gave up and went home leaving me to scour the treetops with ever decreasing confidence that these elusive birds would show themselves. At 0830hrs I decided to have one more look in the birds' favoured Poplars before going home to warm up my near frostbitten toes! To my surprise some movement right at the top of one of the trees proved to be a Waxwing, closely followed by another 20, or so. I watched them for a further 10 minutes before something spooked them and they flew off out of sight. I managed to get a couple of distant photos through my binoculars just to prove that they did turn up!
Posted by Paul at 17:00 No comments:

Friday 18 March: Went off to the local supermarket car park at 0900hrs to look for a flock of Waxwings that were seen there yesterday afternoon. Needless to say they were nowhere to be seen....and it stared raining heavily! But I did see 20+ Redwings which was a nice surprise. Apparently the Waxwings were there at 0800hrs this morning so I'm going to have to have another look later on if the rain stops!
Posted by Paul at 12:43 No comments:

Thursday 17 March: A few days away from Gaucin! An morning run around Whiteknights Lake near Reading produced several Great Crested Grebe, a pair of Mandarin Duck and a pair of Egyptian Goose with four young! Even more Red Kite in the area than usual - at one point there were 7 together over Earley.
Posted by Paul at 15:49 No comments:

Monday 14 March: The wind has changed to SE and brought with it yet more torrential rain - there'll be no birding today!
Posted by Paul at 13:22 No comments:

Saturday 12 March, 1600hrs: Group of 15 Short-toed Eagles heading North over Gaucin during a welcome break in the rain - one or two looked a bit ragged but there were a couple in stunning adult plumage!!
Posted by Paul at 16:06 No comments:

Saturday 12 March: Finally the wind has changed direction to a Westerly which should bring more migrants over Gaucin; the problem is it has brought yet more rain so viewing opportunities ar going to be limited!
Posted by Paul at 12:36 No comments:

Thursday 11 March, 1430hrs: After nearly 48hrs of non-stop rain there is finally a break although it's still cloudy! The fresh Easterly wind of the last few days hasn't been conducive to passing migrants but one rather bedraggled looking Black Kite just passed low over the centre of Gaucin.
Posted by Paul at 15:00 No comments:

Tuesday 08 March, Gaucin, 0830hrs, mostly cloudy, gusty SE wind: A Hoopoe seen flying out of the pine trees behind the Nanta animal feed shop opposite the petrol station.
Posted by Paul at 09:15 No comments:

Monday 07 March: Good report from the Gaucin-Manilva road at 0800hrs of a flock of 15 Common Crane flying high up the Genal valley (per Wingspanner).
Posted by Paul at 21:39 No comments:

Sunday 06 March: What a difference a few hours makes - after an night of electrical storms and a morning of heavy rain the skies cleared in the late afternoon (1730-1830hrs) to allow a quick walk down the Camino de Gibraltar. Good views of a female Sparrowhawk, plus Black Redstart, Serin, Stonechat, Griffon Vulture, Common Kestrel, Spotless Starling, Blackbird, Blackcap, Chaffinch, Goldfinch, Barn Swallow, House Martin and my first Common Swift of the year. Both Cetti's Warbler and Cirl Bunting were heard. Sitting writing this looking out of the window down towards Gibraltar there at least two Common Swift wheeling away in front of the village. There hasn't been much raptor migration visible from Gaucin for a while with fresh E-SE winds keeping the birds farther west and the forecast for the next few days isn't too favourable, either but you never know!
Posted by Paul at 18:46 No comments:

Thursday 03 March: Today I was lucky enough to join Chris and Penny on a Wingspanner day tour to La Janda, visiting Los Barrios land fill site, the Ojen Valley and Los Lances beach near Tarifa. It was a still day with varying amounts of cloud. 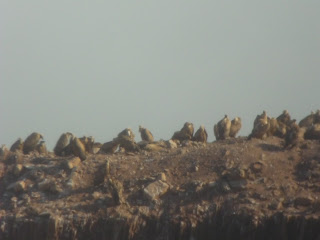 At the land fill site we saw many Black Kite, a lot of which were perched nearby in trees, and also lots of Griffon Vulture - see photo for an idea of the landscape! The first few hundred metres of the Ojen valley produced no less than 7 Short-toed Eagle and we imagined a day with the skies full of incoming migrants - but it was not be; despite the ideal weather conditions we only saw a few more groups of Black Kite over La Janda and that was it! Further into the valley we spotted a few Common Kestrel and a couple of Common Buzzard as well as Song Thrush, Robin, Sardinian Warbler, Black Redstart, Blackcap, Jay, Goldfinch, Chaffinch, Greenfinch and we heard a Mistle Thrush singing. 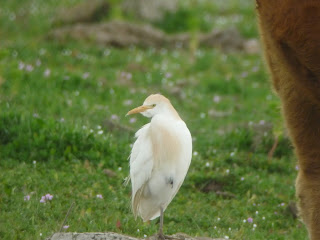 We stopped at the reservoir hoping to find a Long-legged Buzzard or Osprey but only picked up Cattle Egret (see photo), some Mallard, Thekla Lark and a Green Sandpiper.
After exiting the valley we headed for the beach at Los Lances. 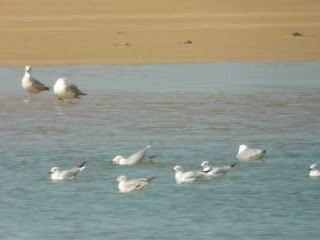 In amongst a few hundred gulls was a group of about a dozen Audouin's Gull (see rather poor photo of one, with it's head dipped, amongst the Black-headed Gulls - I left my glasses in the car and there was a heat haze!), also Yellow-legged Gull, Lesser Black-backed Gull, Black-headed Gull, Sandwich Tern and a single Caspian Tern. Waders included over 50 Sanderling, some Dunlin and a single Redshank. We also saw Cattle Egret, Spotless Starling, Meadow Pipit, Crested Lark, Barn Swallow and a few House Martin.
We then drove on to La Janda - one of my favourite birding spots. We stopped just inside the area at the junction with the 'main' track and it wasn't long before we spotted a couple of hundred White Stork, at least 400 Common Crane, Marsh Harrier, a superb male Hen Harrier, lots of Grey Heron, Little Egret, Cattle Egret and Calandra Lark. Most notable was a male Bluethroat that surprised us all by coming out into the open ditch and having a quick drink - better than the usual glimpse between reed stems of this famously shy species!
In one of the flooded rice fields, we estimated there were at least 200 Yellow Wagtail (Ibericae), 100 White Wagtail and a fair few Meadow Pipit and they were joined by several Water Pipit a couple which were in summer plummage. Other birds found in the fields included many Common Snipe, Spoonbill, Greenshank, Ringed Plover, Redshank, Green Sandpiper (4) and a good sized flock of Corn Bunting. At one point almost everything took off in a hurry and we weren't surprised to see a Peregrine swoop across the field - as it gained height it even harrassed a couple of White Stork!
Next we stopped on the track to Benalup where we watched a hillside for sightings of raptors. First we found another Hen Harrier (a ringtail this time), male and female Marsh Harrier, lots of Griffon Vulture and several groups of Black Kite passing overhead. We also had distant views of Spanish Imperial Eagle there were 2 possibly 3 juveniles including two that were intent on chasing one another for several minutes.
As we began the drive home we stopped to look at Red-legged Partridge and spotted a large flock of Golden Plover flying high overhead. But to cap a great day's birding we saw a perched Black-winged Kite. It took off and began hovering not too far away and it was interesting to note the different hovering style when compared with Common Kestrel.
Thanks to Wingspanner for allowing me to join his tour and also for some of the text above!
Posted by Paul at 10:19 No comments:

Tuesday 01 March, Rio Genal, 1530-1630hrs, clear, cold NE wind: Following Wingspanner's sighting of a Great White Egret down on the river and a Goshawk nearby I popped along this afternoon hoping to catch up with them. Unfortunately I didn't see either but there was a Green Sandpiper and a very bright Grey Wagtail and along with an influx of House Martin and Barn Swallow a 'first-of-the-year' Red-rumped Swallow.
ps. There was a possible Goshawk above the end of Camino de Avedin this morning but by the time I had retrieved my 'emergency' binoculars from the car I was left with a 1-second glimpse as it dived down behind the trees! Another day, maybe.
Posted by Paul at 18:44 No comments: