Saturday 30 July: Another warm day but with a change of wind direction to N-NW. Personally I didn't see any Black Kite today despite looking to the skies at every opportunity! I suspect any passage was further to the east given the wind direction and other observers appear to support this with reports of over 1000 passing down the Genal valley towards Casares this afternoon. I did see a couple of juvenile Red-rumped Swallow along the Los Ranosos track almost opposite the entrance to La Almuna on the Gaucin-Jimena de la Frontera road; they were chasing in and out of a covered terrace where Barn Swallows have nested previously so I'm hopeful that we may get some breeding nearby next year. Also 25-30 European Bee-eaters on the wires opposite the Brenaverde restaurant just outside Gaucin on the same road.
Posted by Paul at 23:25 No comments:

Saturday 30 July: Huge numbers of Black Kites drifted down the Genal Valley on Saturday evening (30th). Between 6pm - 8pm at least 1,000 birds were seen with more pouring through before then. (per John & Penny Hale - Casares).

Gibraltar will be the place to be on Sunday 31st July to watch them cross the Strait of Gibraltar! (posted by Wingspanner).
Posted by WINGSPANNER at 22:16 No comments:

Friday 29 July, Gaucin, clear skies, very warm, variable E-SE wind: There was an impressive passage of Black Kite today with reports of 150 passing by the north-west of the village during the morning (per Jorrian van de Schaaf) and another 150, and a single female Marsh Harrier, during early afternoon (per Wingspanner). These birds were mostly flying along the Genal valley then 'turning right' in front of Sierra Crestellina before heading SW towards Tarifa. These reports inspired me to brave the heat and have a concerted look which was rewarded with a further 225, most of these birds passed directly over the centre of the village, in a 10-minute period between 1720 and 1730! The Black Kite were joined on the thermals by the occasional, presumably local, Booted Eagle (one pale morph and one moulting dark morph) and Short-toed Eagle.
Posted by Paul at 10:42 No comments:

Thursday 28 July: Very quiet; since the small party of Black Kite seen by Wingspanner last weekend there's been no sign of returning migrant raptors. Still plenty of Swift activity including another Alpine Swift over Calle Convento at 1915hrs today.
Posted by Paul at 20:50 No comments:

Tuesday 26 July, clear skies, hot: A couple of Short-toed Eagle displaying over the valley below Gaucin during the late afternoon and an Alpine Swift low over Calle Convento at 1830. Wingspanner reported a couple of White-rumped Swift over the river Guadiaro in Cortes on Sunday afternoon.
Posted by Paul at 10:15 No comments:

Tuesday 26 July: Another report of an Eagle Owl in Gaucin village; at 01:30hrs this morning one was seen low over the rooftops in C/Lorenzo Garcia - thanks to Tony Bays. This is the third record of a bird within the Gaucin urban area since January this year.
Posted by Paul at 14:57 No comments:

Monday 25 July: Wingspanner reported 15-20 Black Kite over the village on Saturday afternoon so the 'reverse' migration has begun!
Posted by Paul at 11:09 No comments:

Saturday 23 July: I've been scanning the skies for the first sign of returning migrant raptors but so far there's just the occasional 'local' Booted Eagle and Short-toed Eagle. Bee-eater numbers around the village are beginning to build up so it won't be long before the first Black Kite drifts over towards Morocco.
Posted by Paul at 11:06 No comments:

Tuesday 19 July, Rio Guadiaro, Cortes de la Frontera, 0730-1000hrs, cool at first, mostly sunny: Another early start for Wingspanner and me as we headed down to the river at Cortes de la Frontera. We soon saw several warbler species in the trees and dead branches along the river; Melodious Warbler, Cetti's Warbler, Iberian Chiffchaff, Blackcap but best of all a scarce Sedge Warbler. Down on the shingle were several White Wagtail and Grey Wagtail, including several juveniles, and Little Ringed Plover (see photos, the bright yellow eye showing nicely in the second one!). 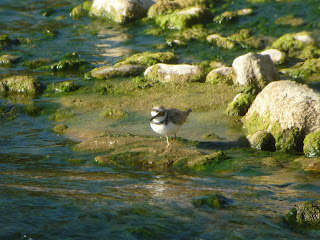 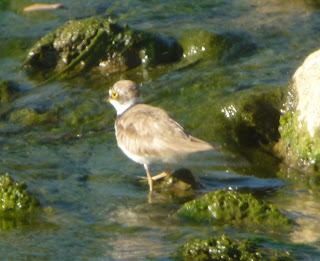 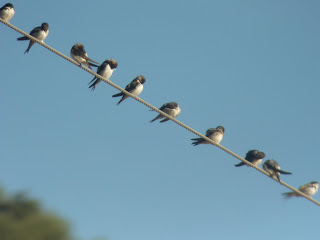 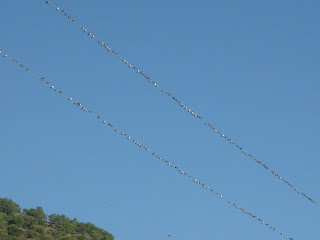 Finally, we saw a couple of Rock Sparrow (see photos in the second one the yellow throat spot is just visible if you zoom in!). 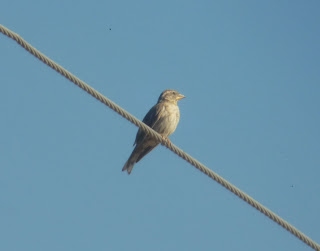 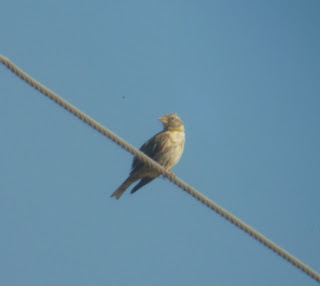 Sunday 17 July, circular walk to the South of Gaucin, starting along the Camino de Gibraltar and returning along Camino de Los Molinos, 1000-1130hrs, mostly clear, warm: At the bottom of the valley there were at least 50 European Bee-eater circling around and making a real noise! Also seen were Golden Oriole, Blue Rock Thrush (on rocks below the castle), Crag Martin, Common Swift, Short-toed Eagle, Booted Eagle (pale and dark morph), Griffon Vulture and Sardinian Warbler.
Posted by Paul at 12:28 No comments:

Thursday 14 July, Gaucin, sunny, hot: Photos of a Short-toed Treecreeper that flew through an open window into our house this afternoon (flew out soon after, unhurt) and of a Short-toed Eagle that landed in a tree in the valley below the house. 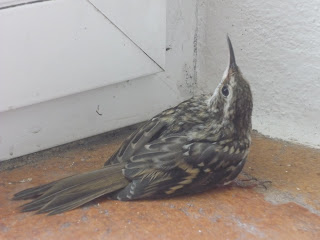 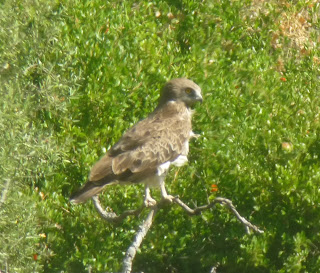 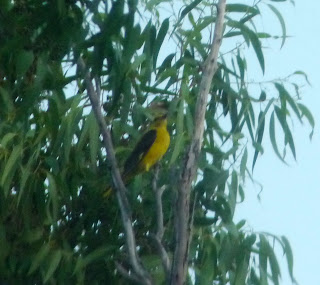 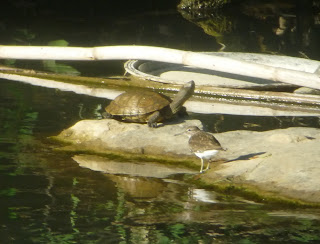 Sunday 10 July, 0830-0900hrs, Rio Genal, Gaucin: Pair of Little Ringed Plover on the shingle with at least one chick - nice to know that they are still breeding there in spite of the fact it's a regular picnic spot! Also, Red-rumped Swallow, Grey Wagtail, Golden Oriole, Cetti's Warbler and Blackcap. 0930-1015, track oppposite Sierra Crestellina: Was hoping for some warblers but other than Sardinian Warbler, no luck, but did also see Southern Grey Shrike (2), Sparrowhawk, Griffon Vulture, Short-toed Eagle, European Bee-eater, Goldfinch, Linnet and Greenfinch.
Posted by Paul at 11:30 No comments:

Saturday 09 July: Very impressive Swift display over the village this evening from about 2100-2200hrs - no sign of any Alpine Swift, though.
Posted by Paul at 11:29 No comments:

Tuesday 05 July, track North of San Pablo de Buciete, 0730-1100hrs, clear, warm: Wingspanner and I set off at 0700hrs in search of one of my favourite species, the tricky Rufous Bush Robin. Our first scans delivered a couple of Melodious Warbler, including a juvenile, and a possible Olivaceous Warbler of which our views were frustratingly fleeting. After half-an-hour, or so, we heard an instantly (un)recognisable snippet of song and knew that something interesting was afoot! Soon we tracked the song down to an adult Rufous Bush Robin that paused briefly on a wire fence before disappearing off into the scrub. After a good hour and a couple more glimpses we eventually located two individuals on the track and managed to get some reasonable photos, including the under-tail pattern and one sitting on a telephone wire, see below - for a generally shy species these two were extroverts in the extreme! To round the morning off we also got good views of the Olivaceous Warbler as well as seeing Short-toed Eagle (very well-marked adult), several White Stork, Common Whitethroat, juvenile Tawny Pipit (see photo), Common Buzzard, Sardinian Warbler, European Bee-eater (see photo), Collared Dove, Woodchat Shrike (including many youngsters), Corn Bunting, Goldfinch, Zitting Cisticola, Cetti's Warbler, Red-rumped Swallow, Raven, Greenfinch, Spotless Starling, House Sparrow, Blackbird, Stonechat, Barn swallow, House Martin and Common Swift. A great morning's birding, well worth the early start! 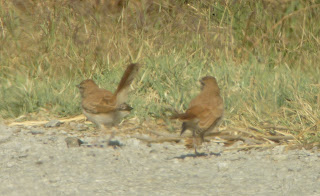 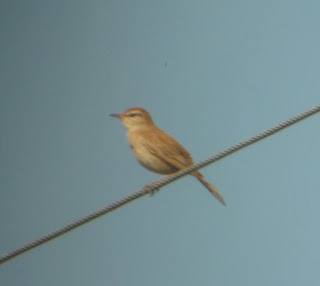 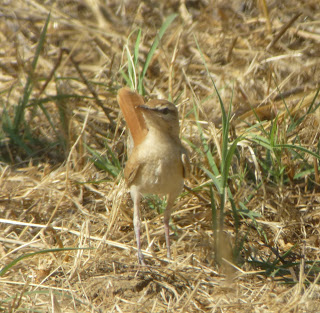 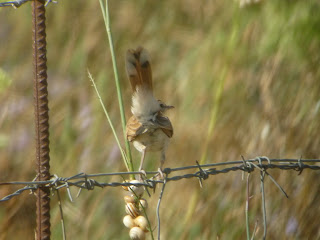 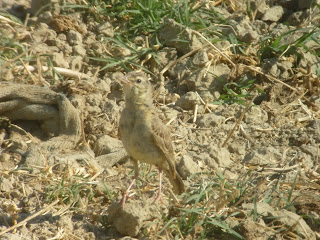 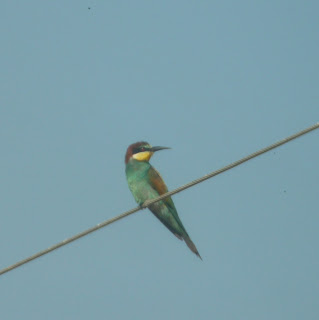 Sunday 03 July, La Umbria walk, Gaucin, 1100-1320hrs, warm, mostly cloudy: Just a solitary Booted Eagle a Cirl Bunting and a Great-spotted Woodpecker to get excited about! Noticeably less butterflies about, too, as the flowers die off but still a few Spanish Marbled White and Spanish Gatekeeper. In the photos, a Geranium Bronze. 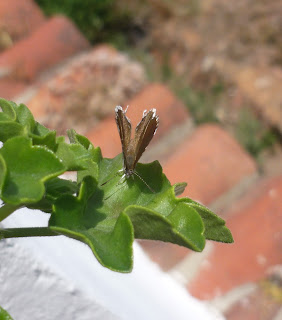 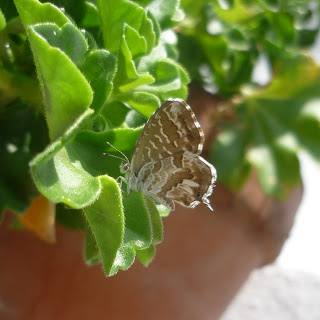 Saturday 02 July, 0930hrs: A pair of Red-rumped Swallow just down the 'Los Ranosos' track opposite the entrance to La Almuna. 1830hrs: a quick visit to the 'Arroyo del Moro' track below El Hacho but quiet with just a couple of Blackcap still singing away and a Booted Eagle and Short-toed Eagle lazily drifting around but very little otherwise.
Posted by Paul at 09:11 No comments: