Tuesday 26 February, Gaucin, partly cloudy, fresh NE wind, 10C: After the 4 Short-toed Eagle in Marchenilla yesterday there was a single bird at 1130hrs over Camino de Avedin in Gaucin today; also a Peregrine at 1500hrs.
Posted by Paul at 18:21 No comments:

Sunday 24 February, Gaucin, mostly sunny, light-fresh NW wind, 11C:  After another 37L/m2 of rain on Friday night there's a lot of water around and many small streams that have been dry for some time are bubbling back to life. A check of the gull flock on Estepona beach yesterday produced no surprises with 80+ Yellow-legged Gull, a dozen or so Black-headed Gull and the same number of Mediterranean Gull; offshore were 20+ Northern Gannet and a handful of Great Cormorant and along the promenade a couple of Chiffchaff sp. and a Black Redstart. A lunchtime walk around the Punta de Umbria today produced Griffon Vulture, 4 Raven, Crested Tit, Nuthatch, Blackcap, Song Thrush and a Firecrest was heard. Butterflies included Spanish Festoon, Large Tortoiseshell, Wall Brown and Small Copper. In the Camino de Avedin area this afternoon there was a Sparrowhawk, the usual pair of Common Buzzard and a distant Blue Rock Thrush on the rocks around the castle.
Posted by Paul at 22:42 No comments:

Thursday 21 February, Gaucin, rain, fresh-strong W-SW wind, 9C: A quick morning walk down Camino de Avedin in the drizzzle produced a Firecrest, Great-spotted Woodpecker, a Serin in full song and a small party of Long-tailed Tit. There was light rain falling virtually all day and late evening the heavens opened with approximately 45L/m2 rain recorded in the 12hrs to 0900hrs Friday (the rain gauge only goes up to 40L/m2!).
Posted by Paul at 10:22 No comments:

Wednesday 20 February, Gaucin, mostly sunny, light NW wind, 13C: A single Black Kite passed northwards along the Genal valley at 1230hrs and there was a Raven low over Calle Convento at 1700hrs.
Posted by Paul at 23:19 No comments:

Tuesday 19 February, Gaucin, rain, light-fresh SE wind, 9C: A cold, wet day spent mostly in the cloud with nothing but a couple of Griffon Vulture to see! A total of 47L/m2 of rain fell in 36hrs and the forecast remains unsettled for the coming week. Still waiting for some Black Kite passage although small numbers have been reported further east along the coast.
Posted by Paul at 09:48 No comments:

Saturday 16 February, Gaucin, mostly sunny, light NW wind, 15C: Janys spotted this interesting plant whilst walking around Punta Umbria the other day and took the photo with her phone....it's Aristolochia baetica also known as Dutchman's Pipe or Pipe Vine and is a member of the small Birthwort family. 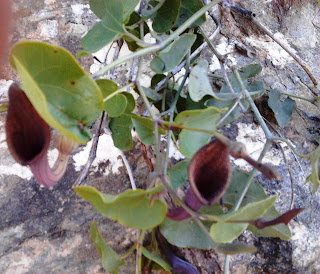 Friday 15 February, Gaucin, sunny, light NE wind, 18C: Nothing to report locally but on an afternoon drive to Cordoba spotted Black-winged Stilt and Greater Flamingo in road-site pools just outside Campillos. In Cordoba itself there were 7 Black-crowned Night Heron roosting in trees alongside the impressive roman bridge. In the absence of any bird photos, here's one of the roman bridge: 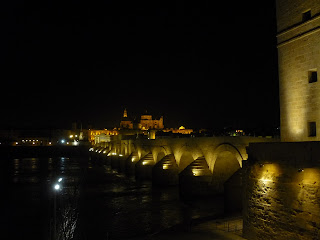 Thursday 14 February, Gaucin, sunny, light NE wind, 19C: A short early evening visit to the west slope of El Hacho produced Griffon Vulture, a pair of Peregrine, Common Kestrel, Red-legged Partridge, Song Thrush, Blue Rock Thrush, Black Redstart, Crag Martin, Stonechat, Sardinian Warbler and Blackcap. Earlier in the day there was a pair of Common Buzzard above Camino de Avedin (they seem to be around and about most days) and yesterday a pair of Peregrine high up above the same track. Robin, Chaffinch, Blackcap and Serin are all in full song but so far no Chiffchaff.

Photo is the sunset from last Sunday..... 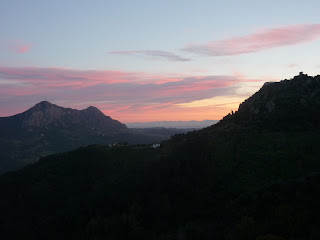 Monday 11 February, Gaucin, mostly cloudy, fresh NW wind, 7C: A very cold day for Gaucin, feeling positively wintry in the fresh NW wind; small puddles were icing over by 1900hrs. The 20 or so House Martin that have already arrived must be wondering why they bothered. There's been little change in the bird-life, a couple more Barn Swallow seen in the village but still no visible Black Kite movement. A group of Griffon Vulture were trying hard to find an early morning thermal and several 'couples' were locking talons in mating displays. Walking into the village along Camino de Avedin the last few days I've seen Firecrest and Short-toed Treecreeper plus some small mixed finch flocks that included at least a couple of Siskin.
Posted by Paul at 13:05 No comments:

Saturday 09 February, Gaucin, sunny, light-fresh NE wind, 14C: An early morning visit to the Rio Genal below Gaucin was very quiet, just a group of about 12 White Wagtail in the field alongside the river and a Cirl Bunting singing in a Eucalyptus tree. It was pretty chilly, too, with a white frost on the top of the ploughed soil. I moved on to the Casares-Secadero track where it was also quiet but I did pick up the first Red-rumped Swallow of the year, plus 4 Common Buzzard, Common Kestrel, Little Owl, Raven, Great Cormorant, Yellow-legged Gull, Grey Heron, Cattle Egret, Little Egret, Blue Rock Thrush (strange to see one on rocks beside the river), House Martin, Song Thrush, Black Redstart, Crested Lark, Cirl Bunting and small flocks of Linnet, Chaffinch and Greenfinch. In the afternoon there was a Peregrine circling above Camino de Avedin and 2 Common Buzzard perched on the top of a pine tree on La Umbria hill. In the fading light of dusk there was what appeared to be a Little Egret making its way along the Genal valley before turning right to pass over Gaucin in front of the castle. There are several Chiffchaff about now but none singing yet so not identifiable as Common or Iberian; also still a few Black Redstart around on the outskirts of the village.
Posted by Paul at 10:10 No comments:

Wednesday 06 February, Gaucin, sunny, light N-NW wind, 14C: The first Black Kite of the season with a single bird seen just to the north-east of the village at 15:00 hours.
Posted by Paul at 22:32 No comments:

Tuesday 05 February, Gaucin, sunny, light NW wind, 17C: The first Barn Swallow of the year in the village with one flying around the bridge behind the panaderia. Walking back from the village to Camino de Avedin both Siskin and Linnet were heard in full song; also more Blackcaps beginning to sing. More butterflies on the wing including small Tortoiseshell, Cleopatra and Small Copper. Yesterday afternoon there were 70+ Griffon Vulture over Sierra Bermeja.
Posted by Paul at 22:16 No comments:

Saturday 02 February, Gaucin, cloudy am, sunny pm, fresh N wind, 14C: A sprinkling of rain overnight and the coldness of the N wind seemed to stop Spring in its tracks! There were still some brave Sardinian Warblers persisting with their scratchy song and Robins were on full volume. A couple of butterflies were on the wing rather early in the year, a lovely Spanish Festoon and a pair of unidentified small blue, probably Common Blue.
Posted by Paul at 09:51 No comments: