After a brief spell of westerly winds, a return to easterlies and a cooling in the temperature resulted in stormy conditions that this afternoon brought the first rain since 27 April, with 9mm falling during a short period of thunder and lightning. Early afternoon 4 Honey Buzzard and 1 Black Kite moved through and, taking advantage of the calm air after the storm, at least 35 Honey Buzzard and 3 Black Kite were seen between 1830-1930hrs.

Today the temperature was back to a more 'normal' mid-20s for the middle of May. Just a single Honey Buzzard over the village at lunchtime plus at least 2 Alpine Swift amongst a large flock of Pallid/Common Swift over Calle del Pino from 1830hrs.

The main story, however, comes from last week......and involves Red-footed Falcon!
The first report, of '5 small falcons' flying north between El Hacho and Gaucin village, came from Tim Birkhead at 1115hrs on 11 May; although they were moving through at a fair height, he thought they were Red-footed Falcon, including 2 adult female and 1 immature. At 1450hrs on 14 May Tim picked up a further 15 falcons, on at least some of which a rufous vent was seen; this time Tim was sure that they were Red-footed Falcon.  A couple of days later a search of the internet revealed that a female Red-footed Falcon was seen in Osuna, not so far away in Sevilla province, on 15 May; also, there were reports of an influx into Morocco and the Iberian peninsular, including 'several sightings in Andalucia' over the previous few days. Finally, a report from Girona in north-east Spain from 16 May noted no fewer than 18 birds together!
This species is infrequent here at the best of times, although there was an influx in Spring 2008, so an event such as this, though not unprecedented, is pretty spectacular - shame I failed to see a single one (I'm still looking, though, just in case)!

Reports for yesterday, weather similar to today but a couple of degrees warmer, included 12 Honey Buzzard, 4 Booted Eagle and 2 Short-toed Eagle heading north over El Puente around midday and 4 Common Cuckoo (3m 1f) on El Hacho (per Tim Birkhead); I managed just 3 Honey Buzzard mid-afternoon.
Today there were 4 Honey Buzzard over La Umbria at 1030hrs, also in the area, a first for me here in early summer, was a Turtle Dove plus at least 3 Bonelli's Warbler, Iberian Chiffchaff and a family party of European Nuthatch. There were two Booted Eagle displaying just above the rooftops over Calle Convento at 1330hrs.
A couple of superb photos of a male Blue Rock Thrush, nesting in the centre of Gaucin, courtesy of Tim Birkhead: 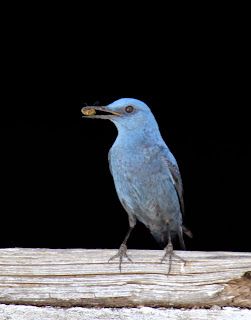 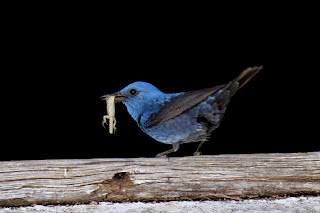 The last couple of days have been rather warm and slightly hazy and today was no different. Very little to report....Honey Buzzard passage has dried up, with just 12 reported by Tim Birkhead today, there was a pair of Booted Eagle displaying just south of the village on Sunday afternoon; a Common Cuckoo was heard and two Short-toed Eagle seen just below Puerto del Negro on Sunday morning, also a Common Cuckoo calling and Golden Oriole, Woodchat Shrike and Common Nightingale all singing near La Herriza hotel this morning; several Melodious Warbler along the 'paseo' towards the Estacion de Gaucin turning - thanks again to Tim and also for these two superb photos of Rufous Bush Robin, seen near San Pablo de Buceite a couple of days ago: 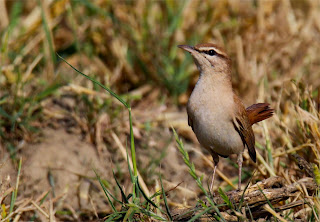 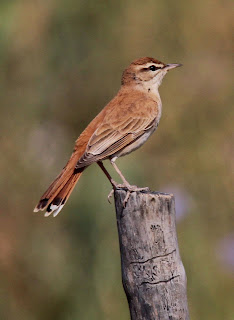 This morning's calmer conditions saw a return of big numbers of Honey Buzzard with Tim Birkhead reporting 500-600 passing over the village between 1000 and 1130hrs; just south of the village I saw 150+ between 1030 and 1100hrs with at least one Black Kite and one Booted Eagle amongst them. The wind picked up during the afternoon and the Honey Buzzard passage stopped abruptly.
Tim also reported a Common Sandpiper at Estacion de Gaucin and Janice MacBeth saw 3 Golden Oriole just upstream from the bridge over the Rio Genal below Gaucin.
Posted by Paul at 12:35 No comments:

Down near Casares in the area of Sierra Crestellina during the morning as support for a sponsored walk, Chicas Challenge, in aid of the PAD animal charity based in Gaucin, see links below:
Chicas Challenge

I realise that the event is over, but the charity does a wonderful job (100% voluntary) re-homing abandoned dogs and cats, as well as running a successful neutering programme that has vastly reduced the number of stray and suffering animals in Gaucin; it can do with all the financial support it can get.

On the birding front, an adult Egyptian Vulture was a good early sighting, but by 1000hrs it was all about Honey Buzzard as at least 200 moved through over the course of an hour and a half, some were passing along the ridge of the sierra at quite low altitude; most were adults but there were a few juveniles, including some superb specimens, see one in photo below. In amongst the buzzards gaining height on the thermals were at least one Black Kite and a couple of White Stork (migrating, or just having a break from the San Roque breeding colony?). Also around were Griffon Vulture, Short-toed Eagle, Booted Eagle and Lesser Kestrel, with Blue Rock Thrush and Bonelli's Warbler seen in the wooded area below the ridge.
In Gaucin there was more Honey Buzzard passage with with several groups of 20+ seen during the afternoon. 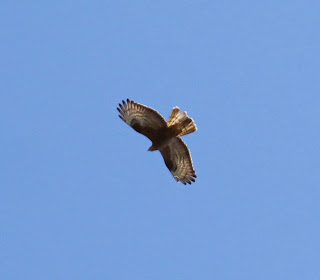 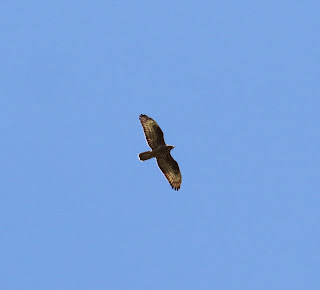 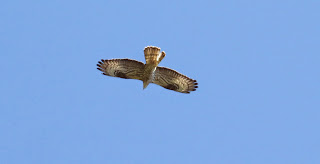 In Sevilla (where it was a very warm 35C) for the weekend but I had several reports from Gaucin of large numbers of Honey Buzzard continuing to move through. This morning there were 20 Honey Buzzard at 1200hrs and a further 16, plus 7 Black Kite, at 1230hrs; all east of the village, following the Rio Genal. West of the village at 1230hrs there were 3 Black Stork. A few singles and twos of Honey Buzzard were seen during the afternoon.
Posted by Paul at 08:51 No comments: 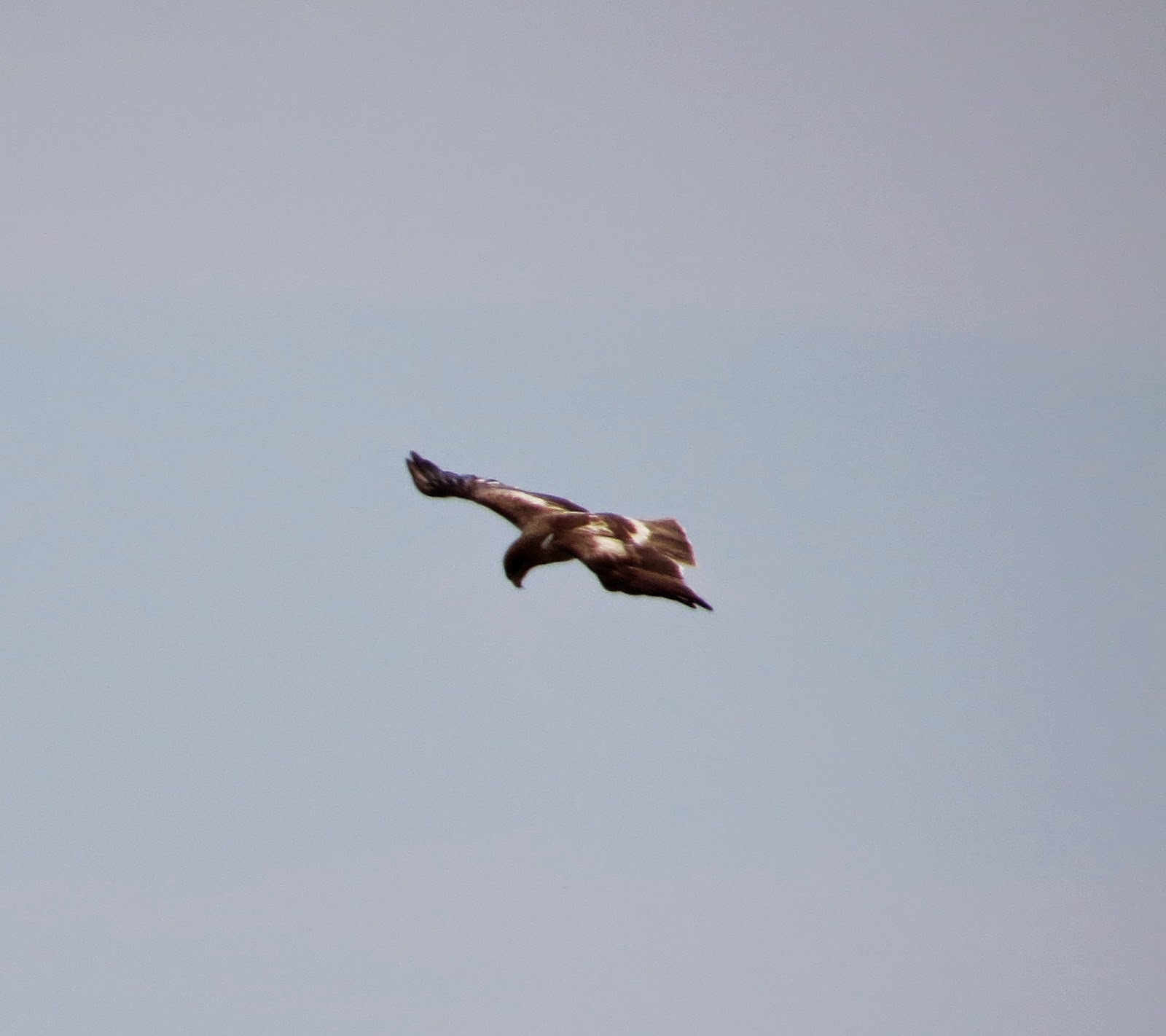 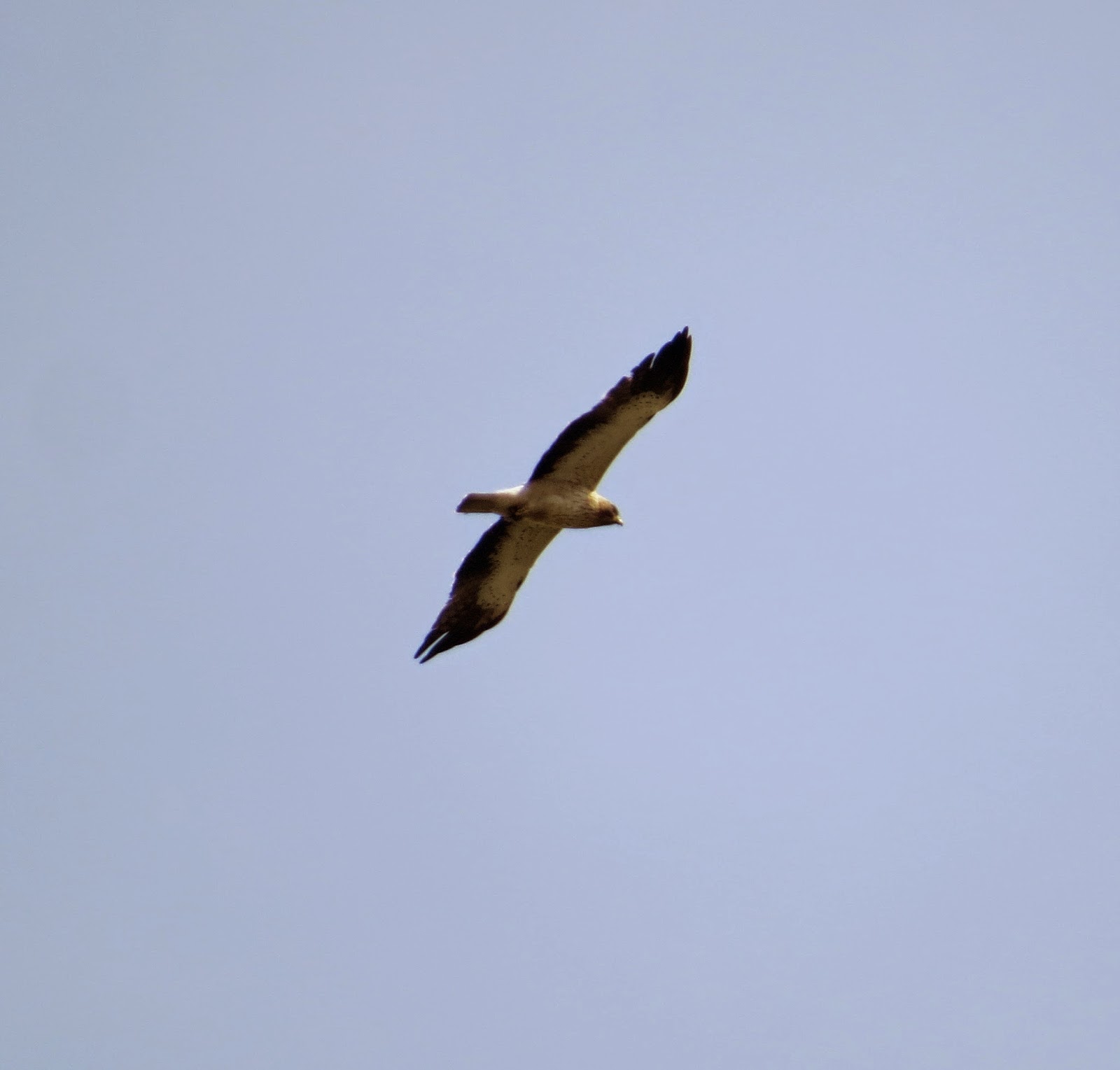