Wednesday 29 May, Gaucin, sunny, light-fresh W-NW wind, 18C:  There was a Tawny Owl calling last night just south of Calle del Pino. At 0945hrs there were 10 Honey Buzzard climbing on a thermal above Camino de Avedin.

Tuesday 28 May, Gaucin, cloudy, light-fresh W-NW wind, 17C: There was a single Honey Buzzard through on Sunday morning whilst I was doing the second Semana Cultural bird walk but not much else of note. Today, in the wind, it felt cooler than the 17C it was. A mid-afternoon walk up the slope leading to El Hacho produced few birds, a couple of singing Cirl Bunting and Sardinian Warbler the 'highlights'. There were a few butterflies on the wing, including Spanish Gatekeeper and Spanish Marbled White, see photos. Also still a lot of superb flowers around including Corymbose Sheep's Bit Jasione corymbosa and Rampion Bellflower Campanula rapunculus, see photos.

Saturday 25 May, Gaucin, sunny, calm air-light W-SW wind, 23C: At 1000hrs I led a 'birdwatching walk' to La Punta Umbria as part of Gaucin's Semana Cultural (Culture Week). Despite the presence of several young children and a large dog we still managed to see or hear all of our target species except European Bee-eater (though I did hear some a couple of hours later whilst at home!). Everyone was thrilled to see several Honey Buzzard moving North as well as a Peregrine, especially as they weren't on our list. Small numbers of Honey Buzzard continued to move through throughout the afternoon and surprisingly one group of 12 was accompanied by four, presumably late-arriving, Black Kite.
Posted by Paul at 09:40 2 comments:

Thursday 23 May, Gaucin, mostly sunny, light W wind, 24C: A second day's birding with Pat and Kev and much improved weather over last Saturday! As I went to get the car I heard a Crossbill singing in a Cipress tree in the old builder's yard on Calle Convento - interestingly it was a female; they do sing, but infrequently. Our first stop was in the Haza de la Beata area between Barca Moreno and Marchenilla with the target bird Rufous Bush Robin. Despite spending nearly three hours up and down the track we only caught a couple of brief glimpses as individuals darted out of the undergrowth for a quick feed on the ground. We did, however, have some superb raptor sightings with the highlight being stunning views of an adult Egyptian Vulture; other species seen included Griffon Vulture, Booted Eagle, Short-toed Eagle, Common Buzzard, Honey Buzzard (still a few passing through), Peregrine, Lesser Kestrel, Raven, White Stork, Turtle Dove, Common Cuckoo, European Bee-eater, Spotless Starling, Stonechat, hundreds of Common Swift, Tawny Pipit, Crested Lark, Nightingale, Zitting Cisticola, Melodious Warbler, Sardinian Warbler, Blackcap and Corn Bunting. We also saw Red Fox, Rabbit and a Weasel.

After a quick bar stop to drink some hand-squeezed orange juice in the home of Andalucian orange production we moved on to San Enrique Wood where we picked up several Tree Sparrow and Spotted Flycatcher; along the river Booted Eagle, Kingfisher and Little-ringed Plover; Cetti's Warbler was heard. A short visit to the lagoon at Torreguadiaro was unproductive other than a brief view of a Purple Swamp Hen - the reeds have grown so tall the water is now virtually unviewable. At the bridge over the Rio Guadiaro we saw Red-rumped Swallow and Barn Swallow and a fledgling Serin being fed. It was now 28C with a nice cooling breeze.

We drove back to Gaucin via the Secadero-Casares track where we stopped above the river and had great close views of Booted Eagle and also saw Grey Heron, Little-ringed Plover, Woodchat Shrike, Olivaceous Warbler and lots of Crested Lark. At the water's edge and beside a couple of small puddles half-a-dozen Linnet took the opportunity to drink and bathe, including one male in striking summer plumage its red breast shining bright in the sun. By now the wind had picked up appreciably and it made for difficult viewing so we moved on spotting a further four Honey Buzzard heading North.

Our final stop was on the Casares-Gaucin road opposite Sierra Crestellina where we were treated to some wonderful aerobatic displays by a pair of Bonelli's Eagle that seemed to be oblivious to the chick flapping in their nest! What a great way to end a lovely day's birding.
Posted by Paul at 10:59 No comments:

Tuesday 21 May, Gaucin, mostly cloudy, rain showers, light W-NW wind, 13C: With temperatures struggling in the low teens and regular periods of rain, 4L/m2 over the past 24hrs, it's still feeling like early Spring. The garden Common Nightingale is much quieter with just the occasional burst of song and the Common Cuckoo in the valley is only calling intermittently. A pair of pale morph Booted Eagle continue to patrol over the village accompanied now and then by a Short-toed Eagle; other than that not much to report.
Posted by Paul at 09:47 No comments:

Saturday 18 May, Gaucin, cloudy am, partly cloudy pm, fresh W-NW wind, 14C: It was quite wet Friday and overnight into Saturday with 8L/m2 of rain. Today felt much colder than 14C with the cooling effect of the rain and wind. An attempt to do some birding with Kev and Pat at the Llanos de Libar was abandoned and we saw only a couple of Blue Rock Thrush and Rock Bunting before being forced away by the rain - at Montejaque it was just 5C at 1000hrs! We drove on to Encinas Borrachas where at least the rain had stopped but it was quite windy and very cold and birds were hard to find but we did get good views of Griffon Vulture, Booted Eagle, a flock of 20 Red-billed Chough, Black-eared Wheatear, Southern Grey Shrike, Woodchat Shrike, Woodlark, Thekla Lark, Corn Bunting and Cirl Bunting; Golden Oriole, Common Cuckoo, Orphean Warbler and Bonelli's Warbler were heard. When the cold got too much we moved on back towards Gaucin, stopping en-route to get views of Common Kestrel and Black Wheatear. A walk to Punta Umbria produced good views of a very pale and ragged Short-toed Eagle, also Common Buzzard, Booted Eagle, Great-spotted Woodpecker, Spotted Flycatcher, Bonelli's Warbler and Iberian Chiffchaff; European Bee-eater was heard.
Posted by Paul at 10:36 No comments:

Tuesday 14 May, Gaucin, partly cloudy, light E-NE wind, 21C: Reasonable numbers of Honey Buzzard moving through with a group of 20+ over El Hacho at 1300hrs and twos and threes throughout the day. Some delayed reports.....there was a pair of Alpine Swift over Calle Convento on Thursday afternoon, Janys reported an adult Egyptian Vulture over the southern end of El Hacho on Saturday morning and there was a singing male Blue Rock Thrush on a roof in Calle Larga on Sunday morning.
Posted by Paul at 09:44 No comments:

Saturday 11 May, Gaucin, partly cloudy, light W-SW wind, 27C: The Honey Buzzard passage is now in full flow with a slow build up on Thursday, some larger groups moving through on Friday, also a female Marsh Harrier, and today vast numbers with several 'kettles' of 100+ individuals seen during the morning and early afternoon. I couldn't manage any accurate counts as I spent most of the day moving between various Spanish first Communion events!

On Friday there was a good showing of orchids along the La Umbria walk, some shown below:

Wednesday 08 May, Gaucin, mostly sunny, light W-SW wind, 29C: A few more Honey Buzzard moving North today with several groups of 4-8 individuals catching the thermals over the village. Most seemed to be following the river Genal then swinging NW as they reached Gaucin.
Posted by Paul at 09:09 No comments:

Tuesday 07 May, Gaucin, mostly sunny, calm ait-light S-SE wind, 26C: A lovely warm Spring day. There have been a few small groups of Black Kite heading North in the last couple of days - it's getting quite late for them, now. Also a few singles and twos of Honey Buzzard but no big groups so far. The garden Common Nightingale is back on form and singing throughout the night.

Sunday 05 May, Gaucin, mostly sunny, light NE wind, 20C: After Friday's climb of Sierra Crestellina was thwarted by a combination of time and rain Janys and I made another visit this morning. The views were pretty good, though it was a little hazy, and we picked up some good bird sightings, too; flowers included the lovely Spotted Rock Rose Tuberaria guttata and the impressive Elaeoselinum asclepium. We climbed to the northernmost peak, the Cerro de Las Chapas at 926m. Best of the birds were great close-up views of Griffon Vulture, an adult Egyptian Vulture, Short-toed Eagle, Booted Eagle, Red-billed Chough, Crag Martin, Blue Rock Thrush, Black-eared Wheatear (two females right at the very top of the peak) and Dartford Warbler.

Saturday 04 May, Gaucin, mostly sunny, light E-NE wind, 16C: A late afternoon walk with Janys to check out another section of the canal at Castellar. As well as some superb flowers in the fields, see photo, we logged Griffon Vultute, a pair of Black Kite (most likely breeding rather than migrating), Booted Eagle, White Stork, Woodchat Shrike, European Bee-eater, Firecrest (heard), Zitting Cisticola, Common Nightingale (several heard), Sardinian Warbler and Corn Bunting. Earlier in the afternoon there was some light passage of Honey Buzzard along the Genal valley in front of Sierra Crestellina with three or four small groups of 1-3 birds moving through. 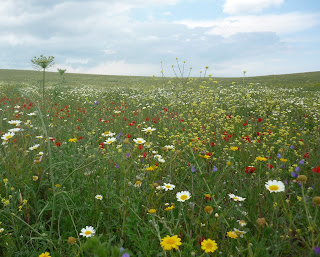 Friday 03 May, Gaucin, cloudy with light rain am, partly cloudy pm, light E-SE wind, 15C: A morning walk from Casares below the two peaks of Sierra Crestellina produced few birds due to the unexpected low cloud and rain - just a pair of calling Peregrines to report and quite a few Bee Orchid Ophrys apifera. Whilst driving down to the coast at 1600hrs a Goshawk flew over the road as it headed down to the Genal valley oppposite the north end of Sierra Crestellina. Swift numbers in the village have increased significantly this week and the Barn Swallows are once again nesting in the entrance to the post office.

Wednesday 01 May, Gaucin, mostly sunny, light S-SE wind, 16C: Janys and I had a great mid-morning exploratory walk along the disused Castellar-San Roque canal and some of the surrounding Almoraima estate. Bird-wise we saw Griffon Vulture, Booted Eagle, Lesser Kestrel (including at least 6 at the colony at bridge near the turn-off of the Gaucin-Algeciras road to San Martin de Tesorillo), White Stork (many nesting alongside the main road at Estacion San Roque), European Bee-eater, Eurasian Jay, Common Swift, Barn Swallow, House Martin, Woodchat Shrike, Stonechat, Sardinian Warbler, Blackcap, Bonelli's Warbler and Corn Bunting; Common Cuckoo, Common Nightingale, Orphean Warbler and Cetti's Warbler were heard. A Bee Orchid Ophrys apifera was the prize flower on display, see photos. Also seen were two Roe Deer and two Egyptian Mongoose. The whole area looks pretty good for birding, especially the mixed woodland/heathland to the south and I hope to go back for another visit soon. 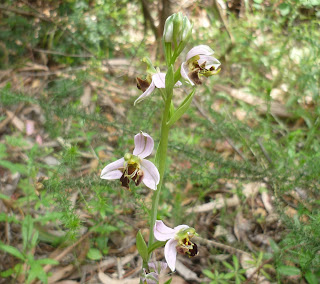 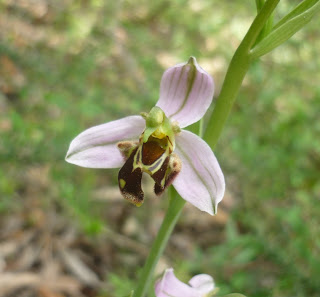