Once again, a chilly start but feeling quite warm in the afternoon sunshine.
This morning Janys and I had an easy walk down by the Rio Genal - birds were curiously few and far between with a Common Kestrel and a distant view of one of the over-wintering Booted Eagle the highlights!
This afternoon I made another attempt to see Ring Ouzel on the west slope of El Hacho and, guess what....another no show! There were some interesting species, though, including 20+ Griffon Vulture, Peregrine, Common Kestrel, Red-legged Partridge, Southern Grey Shrike, Blue Rock Thrush, 10+ Song Thrush, Black Redstart, Stonechat, Crag Martin, Dunnock (possibly one of those I saw a few days ago, but it was two to three hundred metres away from the first site), Sardinian Warbler, Blackcap, 25+ Goldfinch, Greenfinch, Cirl Bunting and Rock Bunting. Back in the village there was a first winter Blue Rock Thrush in Callejon del Pino or, as it's now known, 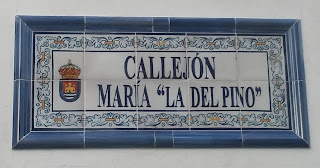