We had a brilliant day out with the most beautiful weather - not a cloud all day, not a whiff of wind and the light was just exquisite.

Dawn and I collect John & Mary on the edge of Gaucin and we all drove down to Casares where we picked up Penny. From there we drove straight to Tarifa to visit Los Lances Beach. What a great start to our birding, the still air produced perfectly calm water giving wonderful reflections of the surrounding mountains in perfect light.

On the beach feeding around the pools we saw a good selection of waders and several species of gull loafed around in the pools. Grey, Ringed and Kentish Plovers, Sanderling, Dunlin and Turnstone made up the wader numbers whilst Audouin's, Black-headed, Yellow-legged and Lesser Black-backed Gulls were joined by a single Sandwich Tern. Dozens of Crag Martins dashed above the beach and other species such as Little Egret, Grey Heron, Goldfinch, Linnet and Robin made up the numbers.
At La Janda we were surprised to be enshrouded in a thick mist but this soon burnt off to reveal a flat landscape of rice fields, reed-filled ditches, flat pastures and distant hills, the whole area was brimming with birds.

Along the first section we noted Great White Egret, Lapwing, Stonechat, Corn Bunting and Common Buzzard, as we reached the central track we stopped for coffee and cake, how nice! From this raised track we had splendid views of our surroundings, the water level in the central 'drain' (canal) was very low  creating a reed-fringed muddy environment which was excellent habitat for wintering Bluethroats, which was exactly was we saw next. What a stunner, a perfectly marked male white-spotted Bluethroat, marvellous! 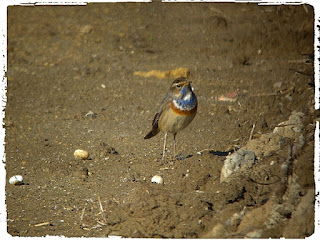 Green Sandpiper, Common Crane, White Stork, Calandra Lark, Zitting Cisticola, Purple Swamphen were seen in the ditches and fields whilst a lovely male Hen Harrier sat preening in a pasture giving lovely scope-views. A flock of some 300 Common Cranes landed in a distant field just as we began our trek along the track.


As we worked our way along the central track we added more species to the list with Marsh Harriers turning up quite often and good numbers of Little Egrets, Spoonbills, Grey Herons and White Storks lining most of the ditches and rice fields.
A few more waders appeared, with Greenshank, Common Snipe and a very surprising Wood Sandpiper (not a bird I would expect to find wintering in Spain). A number of raptors circled on thermals we found a couple of real goodies, first a Bonelli's Eagle and then a Spanish Imperial Eagle joined three Marsh Harriers, wow could it get any better?
Well, yes it could. Our next sighting was of a Kingfisher and then we found another unexpected migrant when a Wryneck landed in the top of a nearby bush.

A second Bonelli's Eagle appeared as we stopped for lunch and during lunchtime we saw Cetti's and Sardinian Warblers, Great Tit, Red-legged Partridge, Common Kestrel, Griffon Vulture and a second Kingfisher.


We drove off La Janda about 3pm stooping several times to watch even more birds, but we missed sightings of Short-eared Owl, Black Stork and Black Winged Kite which has all been seen recently, never mind you can't see them all.

A quick stop along the road to Vejer de la Frontera was made to look for an Eagle Owl, which often sits out in the day time, proved fruitless, however we did see Black- Redstart, Raven, Common Buzzard and lots of Jackdaws.

At Barbate we stopped at the main bridge near the mouth of the river Barbate, the tide was turning and began to ebb as we watched the marshes from a grassy verge. More waders appeared, we saw both Common Redshank and Spotted Redshank standing side by side, also Black-winged Stilt, Grey Plover, Greenshank and a dozen more Sandwich Terns. A Caspian Tern in flight was nice and a closer view of Spoonbill was enjoyed by all.

On Barbate Marsh Reserve we hoped to finish in flurry but we were disappointed by the lack birds on the lagoons, we discovered why when we saw a powered-paraglider preparing to take off. Nevertheless sightings of more waders, Spoonbills, a couple of Ospreys, 5 Stone Curlews and a bunch of Calandra Larks was very nice to finish off the day.


It was now 5pm the sun was dropping, we were losing the good light and temperature was falling so we called it a day and set off home. It had been a wonderful day, we logged 75 species with some real beauties on the list.