Weather: a cloudy, much cooler morning with a stronger, colder south-westerly breeze.

Castillo del Aguila - (eagle castle) is just a stone's throw from our house and a fairly good spot for birding. During the winter the shrubs and trees provide shelter and food for a number of species, the community park on the west side is often sheltered from cold winds by the castle itself.

That was the case this morning as I walked up to the castle entrance, a good number of Chiffchaffs fed in the bushes with dozens of Blackcaps. A Blue Rock Thrush (a nice blue male) flew up the rock face but disappeared too quickly. Other common garden species seen included: Chaffinch, several Robins and Blackbirds. 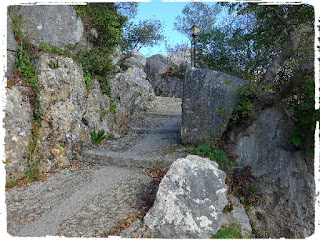 We took an afternoon walk below the village leaving from the bottom of Calle Casares and returned via a track up to Calle Arrabalete.

It was much warmer this afternoon and the cloud had dispersed somewhat so more sunshine warmed us up. Nineteen Griffon Vultures circled high above the Castle, it must be so nice for them to roam freely like that and not have to share their winter air-space with the summer migrants such as Booted and Short-toed Eagles and Black Kites, the latter incidentally, will begin to arrive at the end of this month.

Our walk took us to the hugh rock face, where an Eagle Owl was seen by Paul last year, I scanned the nooks and crannies not expecting to see one at this time of the day but you never know, 'stranger things have happened at sea'.


We saw our first butterflies of the year when a female Brimstone flew by and we had sightings of two Red Admirals. Bird-wise it was much the same as this morning except that we found larger numbers of Chaffinches and a small flock of Serins that fed in the grasses of an orchard.

On the way back up a Common Buzzard drifted over and one or two Crag Martins dashed about the rock face.