Tuesday 30 April, Gaucin, partly cloudy, light SW wind, 13C: Another cool day after a night when 7.5L/m2 rain fell in the pueblo and on the top of Los Reales, just across the Genal valley, it fell as snow, see photo. Further up the valley towards Ronda the aptly-named Sierra de las Nieves was covered with a thick layer of snow. Is it really May tomorrow? The Common Nightingale in the garden had some competition today from a very vocal Blackbird (which for me has the better voice, anyway!), one of a couple of males that have been chasing each other around for a week or so. 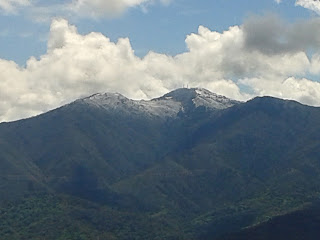