Saturday 06 April, Gaucin, mostly sunny, light-fresh W-NW wind, 13C: After another 18L/m2 of rain yesterday it was great to wake up to a clear sky, albeit feeling a bit chilly in the wind. A morning walk around the base of El Hacho was rewarded at 1200hrs with the passage of 360+ Black Kite, 60 low over the NW shoulder of the mountain followed by another 300+ a little further west, following the river Guadiaro valley. In amongst the kite was a single Osprey. Also seen were Griffon Vulture, Short-toed Eagle, Eurasian Nuthatch, Stonechat and a Red-billed Chough was heard. It was lovely to see so many of the streams in full flow, including the one in the photo that emerged from deep within the rockface and is part of the aquifer that provides water to the village. There were also several flowers out including Mirror Ophrys Ophrys ciliata, Yellow Ophrys Ophrys lutea and Spanish Bluebell Scilla hispanica (both blue and white forms).

Some observations from a visitor over the last few days....Thanks to Campbell Wood. On Monday at the Salto de Cura a Firecrest; on Tuesday afternoon down the Camino de Gibraltar sightings included 10+ European Bee-eater, Sardinian Warbler, Blackcap, Woodchat Shrike, Chaffinch and Crossbill. On Friday evening along the Camino de Gibraltar, Sparrowhawk, Serin, Stonechat, Sardinian Warbler and Linnet. 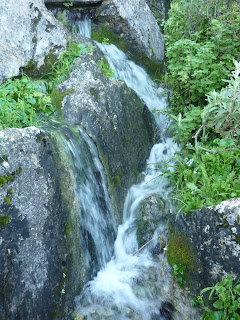