Sunday 14 April, Gaucin, sunny, light SE wind, 22C: Whilst walking from near San Martin de Tesorillo to Castellar de la Frontera on Friday morning I heard 3 Bonelli's Warbler and one Iberian Chiffchaff; once up at the castle at 1130hrs, 200+ Black Kite passed by and there were at least 6 Lesser Kestrel around the castle itself. An unusual sight was a Portuguese Squill Scilla peruviana growing by the side of a cotton field, see photo.

This morning I walked around La Punta Umbria and heard 2 Bonelli's Warbler and one Iberian Chiffchaff, also a Wryneck in the cork oaks. This afternoon, from 1730-1830hrs, I checked out the west slope of El Hacho and was treated to a Whinchat in addition to a pair of Peregrine mobbing an unfortunate Griffon Vulture that must have strayed too near their nest, pale phase Booted Eagle, Blue Rock Thrush, Thekla Lark and Cirl Bunting, see photo. Interesting that the 5 Northern Wheatear from last week seem to have moved on already. 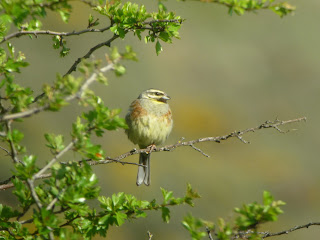 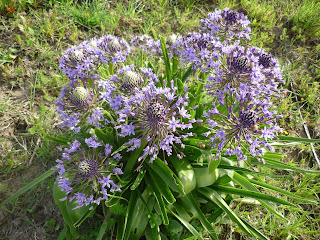