Sunday 29 July, sunny, fresh E wind, 32C: Collecting Janys from Malaga airport gave me another opportunity to visit the Guadahorce reserve from 1730-1900hrs. Despite the intense heat, it was 36C as I crossed the Rio Genal below Gaucin, there was more bird activity than my visit last Wednesday. With limited time available I concentrated on the Laguna Grande where the hide provided a bit of shade. The return passage of waders appears to have begun with 2x Curlew Sandpiper, moulting from summer plumage, 2x Dunlin still in full summer plumage, 1x Common Sandpiper, 6x Redshank (4 juvenile and 2 adult), up to 30 Little-ringed Plover and a single Spoonbill (see photos). Also of note were 4x Sandwich Tern and 2x Little Tern, plenty of Black-headed, Mediterranean, Yellow-legged and Audouin's Gulls and 2x Lesser black-backed Gull, Zitting Cisticola, Bee-eater and Monk Parakeet. There were at least 6 Audouin's Gull with colour rings - I'll add them to the ringing site data and if any have interesting histories I'll let you know. I've included a poor distant photo of a Little Tern dwarfed even by Black-headed Gulls - it's easy to forget just how small they are! 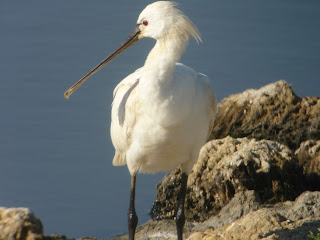 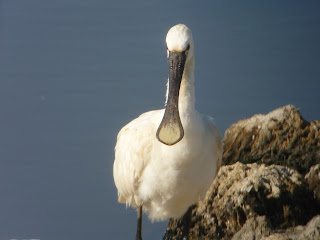 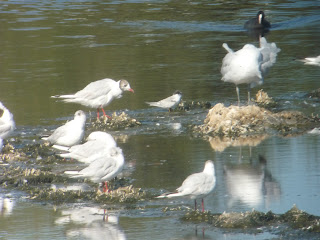