Tuesday 31 July, hazy sunshine, a few white clouds, light E-SE wind, 33C: When the phone rang at 0900hrs with news of a couple of Roller down near San Pablo de Buceite I quickly set off on my first Spanish 'twitch' (not really a twitch as only 15km away and an area that I watch anyway). As I drove along the road a Hoopoe passed in front of the car and then, sure enough, a couple of km on from the garden centre in San Pablo there was a Roller in a large tree about 200m away from the road. As I tried to get a little closer for a photo it flew off to be followed by a second bird that had been in a smaller tree just to the left. I didn't manage to get a photo but it was a very good sighting and the first for me in this area (thanks for the tip-off, Bob). A little further along the road I pulled off onto a track and logged Short-toed Eagle, female Montagu's Harrier, female Hen Harrier, Woodchat Shrike, Southern Grey Shrike (see photos), Bee-eater and Crested Lark. In the evenings there are now much fewer Swift around Gaucin village but last night at 2045hrs above Calle Convento there was an Alpine Swift; also a male Sparrowhawk being 'shepherded' by about 50 House Martin and a Great-spotted Woodpecker in the trees below Calle del Pino. 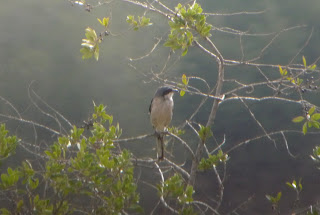 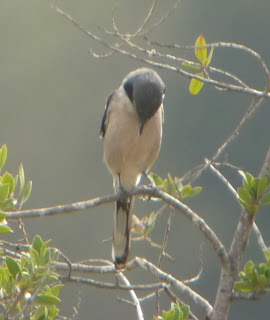