Tuesday 26 March, Gaucin, mostly cloudy, occasional light rain, calm air-light W wind, 11C: In an effort to escape the rain, and to buy what will hopefully be our last load of wood for this winter, Janys and I drove 'down the hill' to Castellar de la Frontera mid-morning. Around the atmospheric castle were Griffon Vulture, Lesser Kestrel, Common Swift, Barn Swallow and House Martin. After a lovely coffee, in the part of the moorish castle that was recently converted into a hotel, we headed back through Jimena de la Frontera where we saw a flock of at least 9 Alpine Swift, a Woodchat Shrike on a telegraph wire, a Hoopoe flying just over the car, a Black Kite, several White Stork and a couple of Short-toed Eagle.  At 1630hrs I ventured out into the intermittent drizzle to see if there was anything interesting around the side of El Hacho - it was all rather quiet, but there was a single Short-toed Eagle, and passing to the N, in the direction of El Peso, was a female Montagu's Harrier; also seen were a couple of pairs of Stonechat, a Thekla Lark, a pair of Cirl Bunting, a male Black Redstart still hanging on to it's wintering grounds, and several Sardinian Warbler. I also saw this interesting grass that I think is Lamarckia aurea or Goldentop Grass: 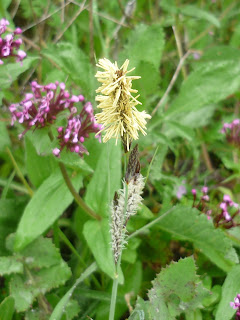