Tuesday 16 October, sunny, calm air-light E wind, 21C. A morning trip, 0830-1200hrs, to the Casares-Secadero track with Tim, who is visiting Gaucin, began on a high note with the appearance of a Black-winged Kite perched on an electricity pylon. In nearby fields were White Wagtail, Grey Wagtail, Crested Lark and a couple of very pale Skylark as well as large flocks of mixed finches (Goldfinch, Linnet and Serin). Down by the river we noted Osprey, Green Sandpiper, Common Sandpiper, at least 10 Great Cormorant, Grey Heron, Little Egret, Mallard, Kingfisher, Barn Swallow, House Martin, Sand Martin and Corn Bunting. Here we also saw a Black-winged Kite; it could have been the same individual that we saw at the start but at a distance of 2km, and given that the original bird was still there on our return, it could well have been a second one. Along a nearby farm track were 5 Hoopoe (see rather poor photo of one!), 2 Northern Wheatear (female/1st winter), Stonechat and Zitting Cisticola. Also seen on the drive along the track were Griffon Vulture, 2 Booted Eagle, Common Buzzard, Common Kestrel, Cattle Egret, Collared Dove, Southern Grey Shrike, Spotless Starling, Chiffchaff sp., Blackcap, Sardinian Warbler and Cirl Bunting; Raven was heard. 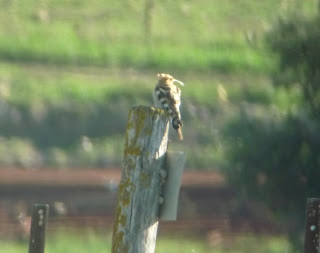