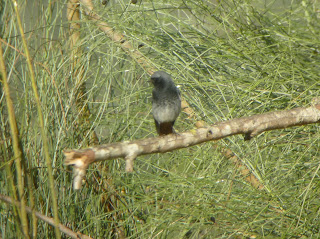 After the river we drove on to Montejaque to look for Ring Ouzel at the impressive Llanos de Libar (see photo). 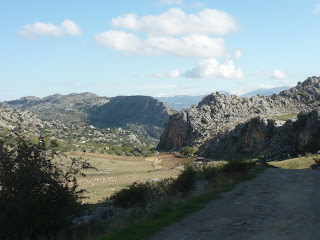 There were plenty of Griffon Vulture around, including some eerily vocal youngsters, and amongst them were two adult Bonelli's Eagle. Further along the track we saw Blue Rock Thrush, Rock Bunting, Sardinian Warbler, Blackcap and one or two Black Wheatear before finally catching sight of a Ring Ouzel; over the course of the next hour we located at least 6 individuals, male and female and got some good views (not good enough for my digiscoping skills but I've borrowed one of Bob's - thanks!).


On the way back to Gaucin we dropped into the Encinas Borrachas track; close to the entrance there was a huge flock of Golfinches (150+), a few Serin, Greenfinches, Linnets and some Stonechats. Further along we saw Red-billed Chough, Southern Grey Shrike, Green Sandpiper, Rock Sparrows, a couple of Skylarks, Thekla Lark and a large flock of Corn Bunting (25+).We didn't venture far as the rain set in quite heavily so we continued the drive back to Gaucin stopping at the chestnut woods, the rain had stopped by now, which enabled us to see no less than 3 Firecrest.
Posted by Paul at 16:27