Wednesday 04 April, Los Lances beach, Tarifa; La Janda; Marismas de Barbate, cloudy am, mostly sunny pm, light SW wind, 13-17C: I joined Wingspanner and two of his clients, Steve and Sue, on day 4 of one of his Andalucia 5-day tours. We started with a quick stop at a sand quarry near Castellar de la Frontera to see if the Bee-eaters had arrived back at a large nesting site... they hadn't but we did see a few in the area, plus several Black Kite, Booted Eagle and Griffon Vulture. Stopping at a road bridge near Estacion San Roque we saw about 12 Lesser Kestrel in and around their nest holes.

Finally we moved on to Las Marismas de Barbate, just outside Vejer, where the highlights were Black-winged Stilt (see photo), Little-ringed Plover and Red-rumped Swallow. 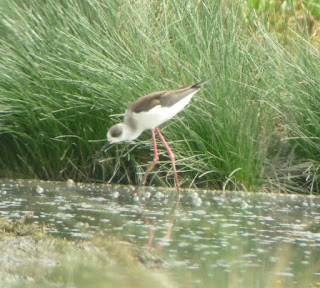 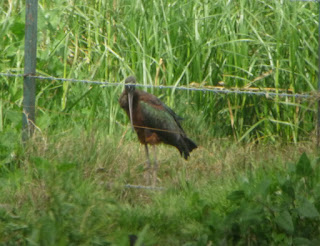 On our drive back along the coast towards Tarifa Steve spotted four Glossy Ibis in a field beside the road...as that was a strange place for them to be we went back for a closer look and found them to be Bald Ibis (see photo - this one was from the reintroduction programme that has introduced birds from NW Morocco). Further along the road we saw a further 22 in flight. 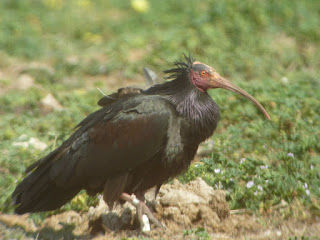 A great day's birding with 70 species seen and another 2 heard.
Posted by Paul at 10:40