A lovely warm late Spring day today with a couple of good sightings in the morning and a bit of excitement during the afternoon as I heard what I thought might be an Iberian Chiffchaff.

An afternoon walk around nearby crop fields/woods/stream produced another Common Buzzard, more Red Kite, a Little Egret and a strange phylloscopus warbler......Initially I heard a bit of a Willow Warbler-like cascade (would be late for a passing Willow Warbler) but it soon became apparent, as it began its song with chiff, chiff, that it was a Chiffchaff sp. My initial thoughts were Iberian but something about it wasn't quite right - the flourish was too strong and the song concluded with a couple more chiffs for good measure. I didn't get a good look at it and as I tried to record its song, someone appeared, calling after their dog, and the bird fell silent! Another look an hour or so later was fruitless. I alerted local birders, just in case, but spent a night doubting that it really was an Iberian!

I managed to hear it with another birder this morning (Tuesday 23 May) and our consensus was that it was a mixed singing Common Chiffchaff (a mix of Chiffchaff and Willow Warber). A new experience for me!


A couple of shots of a Roe Deer in the fields: 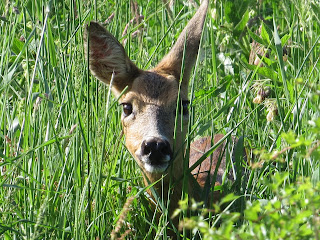 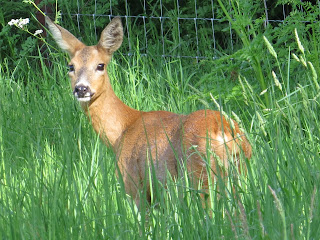