The weather continues to be fairly settled, with daytime temperatures holding up despite the occasional bit of light drizzle and a cool north/west wind - it has dropped to 4C on a couple of mornings.
Fairly quiet bird-wise but over Calle Convento/Calle del Pino in the last few days there's been Common Buzzard, Common Kestrel, Eurasian Sparrowhawk, a couple of duelling young Blue Rock Thrush, a Spotless Starling mimicking a Golden Oriole, Black Redstart and several Common Chiffchaff.
A visit to the west slope of El Hacho on Wednesday morning was curtailed by a strong north-westerly that kept most birds out of sight, apart from a few Black Redstart, a couple of Song Thrush and a brave Red-legged Partridge (there were hunters in the area!). A couple of Spanish Ibex were showing well, though.
On Thursday there were at least 5 Common Crossbill in the pines on the north edge of the village, with both male and female/imm singing. Also a Monarch butterfly over the Calle Convento/Calle del Pino gardens at mid-day and another, or the same one, 30 min later at La Cruz.

Some poor shots of Common Crossbill in the gloomy late afternoon light...... 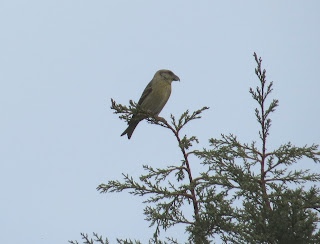 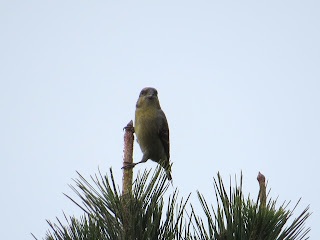 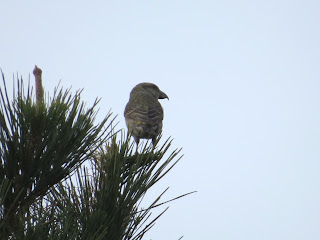