This morning Moira, Charlie and I walked the tracks and paths just to the north of Gaucin, through mixed cork and pine woods. before we met up I heard a Common Crossbill calling as it flew around overhead but couldn't locate it. A female Stonechat, 3 Sardinian Warbler, a pair of Collared Dove and a Eurasian Jay started our sightings as we passed by the open fields behind the petrol station. Further along the track we glimpsed a couple of Bonelli's Warbler, a female/1st summer Pied Flycatcher and a female Common Redstart. Eurasian Sparrowhawk, Eurasian Nuthatch, Goldfinch, Greenfinch, Chaffinch, Blue Tit, Great Tit, Garden Warbler and Blackcap were all logged before we caught up with a couple of specialities of the woods, Crested Tit and Firecrest. As it began to warm up 20+ Griffon Vulture took to the air, along with a Short-toed Eagle, a pair of Common Buzzard and a few House Martin and Common/Pallid Swift. On the final section of the walk a party of 5 Long-tailed Tit and a wonderful male Common Redstart popped up to top off a great morning's birding.

Name that bird.....juvenile Northern Goshawk.....or Short-toed Eagle? A Goshawk was heard calling shortly after it, inconveniently, slunk off through the trees but I favour Short-toed Eagle. 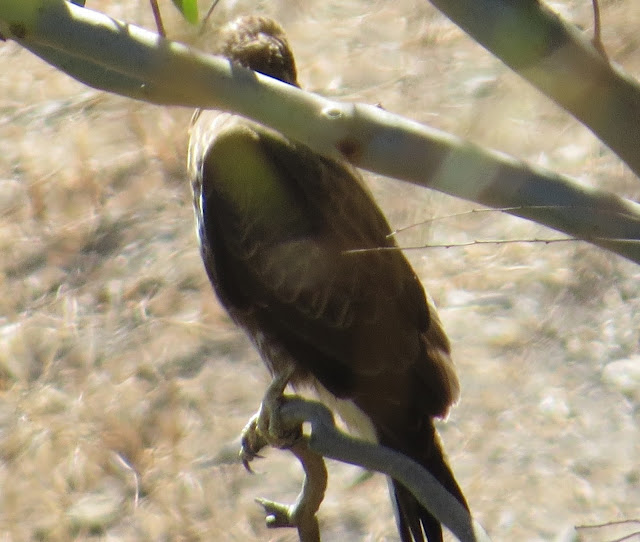