Back after a 10-day road trip to northern Spain having visited Zafra, Salamanca, the Picos de Europa, Segovia and Merida. It wasn't a birding holiday but I did manage to see some good birds but missed a few others! Pleasantly warm with clear blue skies for most of the trip, other than the day we planned to take the cable car to Fuente De in the Picos when it was cloudy and humid, a mini heatwave began as we drove home such that east of Sevilla, en-route to Ronda, the temperature reached a rather warm 42C: 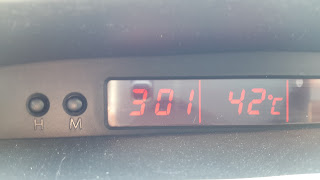 Highlight of the drive from Merida to Gaucin was a flock of 50+ Red-billed Chough that took off from the rockface beside the road just before the Encinas Borrachas mountain pass.