Thursday 25 August, Guadiaro River, Cortes de la Frontera, 0800-1030hrs, clear, warm, light SE wind: Wingspanner and I had a short trip out to the river at Cortes and recorded a good range of species. It wasn't long before we had brief glimpses of a Kingfisher and better views of Grey Wagtail, White Wagtail and Cetti's Warbler. There were plenty of other warblers around including Melodious Warbler, Sardinian Warbler, Iberian Chiffchaff and a Common Whitethroat. In the dried fields and surrounding trees and bushes we saw a juvenile Woodchat Shrike, a good flock of 25 Rock Sparrow, Jay, Spotless Starling, several Spotted Flycatcher, Serin, Cirl Bunting, Greenfinch, Goldfinch and Chaffinch. Along the gravelly riverside there were Grey Heron, Common Sandpiper and Little Ringed Plover and a Sparrowhawk swooped down giving them all a fright. On the hills to the north there was a flock of 55 European Bee-eater, Short-toed Eagle and a restless Peregrine that made a couple of sorties in search of food. In the skies there were still a few Common and Pallid Swifts, several Barn Swallow, a couple of Red-rumped Swallow, small flocks of House Martin and one or two Crag Martin. We had very good views of a party of Golden Oriole; a male, a female and three juveniles - see not very good photo of the still brightly-coloured male! 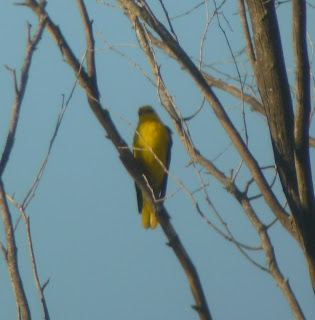 Interestingly, despite similar weather conditions to previous days, there was no sign of raptor migration neither during this trip nor during the afternoon in Gaucin. Presumably thr weather conditions at the point of departure, or en-route, are of more significance.
Posted by Paul at 13:14