Wednesday 27 April, 0930-1330, Encinas Borrachas, clear skies, warm, still: Conor and I set off for another morning's birding this time heading for the rocky terrain of Encinas Borrachas. Spotted a couple of Rock Bunting on the wall beside the road as we drove towards Ronda. Unlike my last visit here it didn't take long to find the Southern Grey Shrike and it posed quite happily, see photo 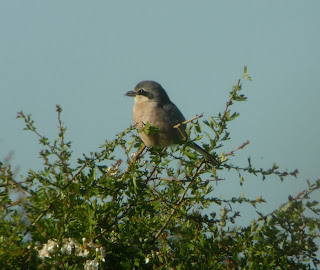 The air rang with the sounds of singing Corn Bunting and Stonechat with the occasional burst from Crested Lark - Thekla Lark was heard in the distance but we couldn't pin them down. A surprise spot was a pair of Little Owl sitting on the rocks just a few metres from the track, see photo. 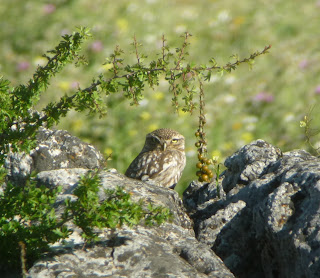 Further up the track we had a fleeting view of a male Spectacled Warbler and then brief views of a male Orphean Warbler that delivered it's wonderful song from deep within an oak tree and steadfastly refused to show well enough for a photo! We did get superb views of Subalpine Warbler, see photo, 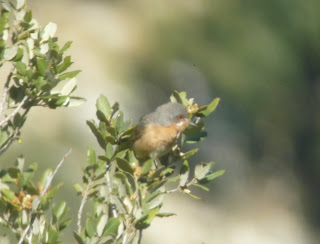 Later on we had some much better views of Spectacled Warbler but we didn't manage to find any Dartford Warbler for Conor's album! Other birds seen included a flock of 40+ Griffon Vulture, Booted Eagle, Short-toed Eagle, Cuckoo, Woodlark, Bonelli's Warbler, Iberian Chiffchaff and Black-eared Wheatear, see photo 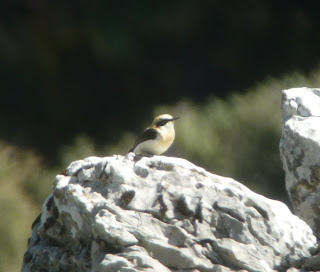