Tuesday 12 April, Encinas Borrachas (between Atajate and Ronda) 0930-1330 and Sierra de Las Nieves 1400-1530, fresh E-SE wind, partly cloudy: Thanks to Wingspanner for allowing me to join him on one of his tours with Rita, Ann, Ivan and Helen! Off to a good start with Southern Grey Shrike, Black-Eared Wheatear and Thekla Lark in the scrubby area just off the road, also here were Stonechat, Corn Bunting and Linnet. A little further on we saw Woodlark and both male and female Dartford Warbler (male in photo, below). 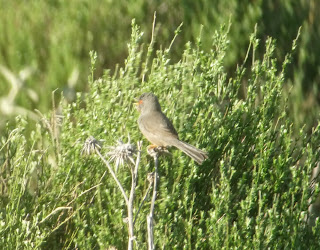 Helen then spotted a couple of Common Kestrel over the limestone ridge harrassing a large bird that turned out to be a Golden Eagle (1cy or 2cy) - what a great sight! Also in this area we saw Booted Eagle, Short-toed Eagle, Raven, Red-Billed Chough, Griffon Vulture, Blue Rock Thrush, Crag Martin, Bee-eater and a small group of Spanish Ibex including at least one kid, see photo below. 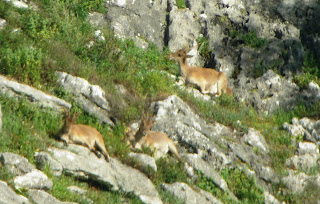 As we continued on the track into the edge of the oak wood there were Bonnelli's Warbler, Cuckoo, Jay, Subalpine Warbler, Woodchat Shrike and Orphean Warbler, in the photo below you can just see it's white throat. 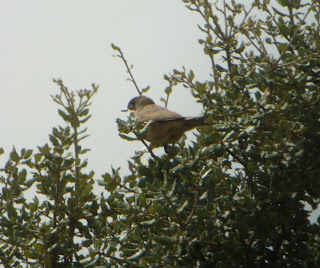 As we walked back towards the car we were treated to great views of a Spectacled Warbler, see photo below - the 'scrub warbler' we might have expected to see but didn't was the most common, Sardinian Warber! 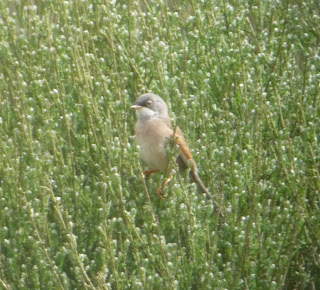 We then drove to the Sierra de las Nieves national park where birds were few and far between but we did manage to pick up Short-toed Eagle, Griffon Vulture, Common Redstart, a flock of 20 Bee-eater, and Rock Bunting. Also a Red-rumped Swallow near the new hospital in Ronda. All in all a great day's birding! Thanks again to Wingspanner!
Posted by Paul at 18:15