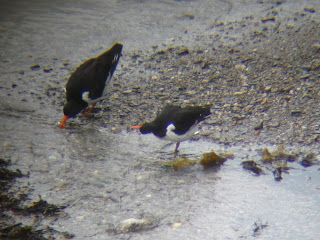 Friday 13 May: Haven't posted for a while as I've been in the UK and then Blogger was offline. Staying in Dartmouth, Devon for a week enabled me to catch up with some 'old friends', specifically Yellowhammer and Bullfinch, neither of which I've seen since moving to Spain! Also saw Northern Wheatear, Skylark, lots of Whitethroat (the hedges around the coast were alive with them) and Common Chiffchaff (but no Willow Warbler), Little Egret, Raven and Common Buzzard. On the last day managed to catch up with a Cirl Bunting; south Devon is now it's only UK stronghold. Photo, taken through binoculars so a bit shaky, shows an Oystercatcher in the midst of it's courting display.
Posted by Paul at 19:14