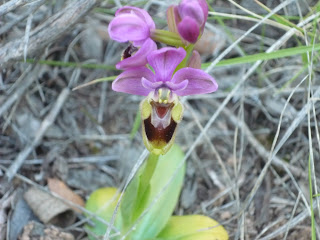 Sunday 28 February, the 'northern' section of the Smuggler's path, towards Puerto del Negro, 1030-1230hrs, sunny, light NW wind: Plenty of small groups of Griffon Vulture around, but also a larger group of 40+ over El Hacho. The first Swift of the year was seen; not a Common or Pallid but a lovely Alpine Swift heading N. Also seen were a single Short-toed Eagle, Common Buzzard, Common Kestrel, Raven, Barn Swallow, Stonechat and Song Thrush. Mistle Thrush, Blue Rock Thrush and Cirl Bunting were all heard singing. There were a few orchids about, mainly Sombre Bee, but the photo shows one I can't identify - anyone got any ideas?
Posted by Paul at 16:31