59 LITTLE BUSTARDS!
We picked a lovely day to make our last outing for the year, after a misty start the sun broke through and warmed us up for the rest of the day.

Myself and Tony (a local birder also from Gaucin) left the village at 8am and headed northward to towards Ronda. We stopped just passed Atajate to look for Ring Ouzel but only found Black Wheatear, Rock Sparrow, Blue Rock Thrush and Common Kestrel.

After making a short stop between Ronda and Campillos we finally arrived at Laguna Dulce which was covered with birds. The light was now very good so we drove to the far side of the laguna to scope the open flat fields, what a good decision it turned out to be. First we found 9 Common Cranes, then a fantastic count of 59 Little Bustards appeared in the distance. many of them were males and were practicing their display jumping which looked quite commical. In the large flat fields we also found 100+lapwings, Golden Plover 7, Calandra Lark, Meadow Pipit, Corn Buntings 50+ and a Marsh Harrier.

At the waters edge we found Black Winged stilts, Greater Flamingo, Common Teal and many black headed Gulls. We then drove around to the hide at the south side of the laguna and from there we had a good hour watching many species. Common Coot numbered over 200 whilst Black necked Grebe 15, Northern Shoveler, White headed Duck 3, Common Pochard, Red crested Pochard 1 fem; Little Grebe, Great Crested Grebe, Gadwall and Mallard.

A nice surprise was a Purple Swamphen which flew from a distant patch of reed to a tiny clump right in front of the hide! The bird looked splendid in the afternoon sunshine (shown below). 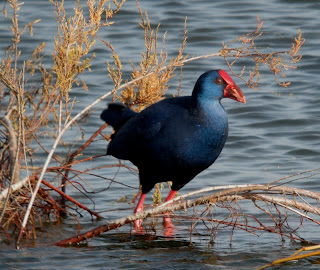 From Campillos we drove to Canete de Real where a vulture feeding station is supposed to be situated, however, there were many Griffon Vultures and Ravens loafing about but nothing was on offer for them. I thought about staking Tony out - but he was driving!

Our last stop was the lovely limestone mountains just above Montejaque, one of my favourite places. There was a surprising amount of water behind the "dam that doesn't work" at Tabniza with many Mallards sitting on the temporary laguna. In the bushes on the slopes of mountains we found Black Redstarts, Blackcap, Blackbirds, Stonechats, Black Wheatears, Rock Bunting, Chaffinch, goldfinch and Robins.

As the light began to fade we realised that it was 4:30pm so we set off back to Gaucin well satisfied with the birds we had seen.
Posted by WINGSPANNER at 19:49