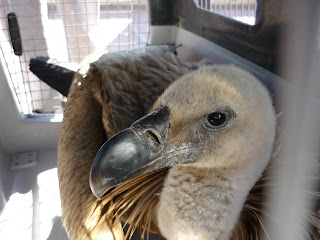 Thursday 04 November: The young Griffon vulture, pictured above, was found exhausted just below Gaucin castle. From the rings on it's feet we were able to find out that it was born in France in Grands Causses (Cévennes) and was ringed in the nest on 25 May 2010 in Tarn Gorge, Municipality "les Vignes", Département "Lozère" in the "Languedoc Roussillon" region. This was the first time it had been recorded since it left the nest. Based on this information it seems likely that it was migrating south when, for some reason, it lost contact with the rest of it's flock. The Environment Agency were contacted and they collected the bird and took it to a rescue centre near Malaga where it will be allowed to recuperate before being released into the local population.
Posted by Paul at 19:20